It’s bound to happen to us at one point or another. Sometimes sooner, sometimes later. Sometimes, when it slips in amongst the happy, positive vibes it can really jar. Like biting into a sweet juicy apple and finding half a worm. All you can see is that one black dot on a white canvas; that dead pixel in the middle of your LCD screen. It rubs at you like a blister.

And if you’re not careful, like a blister, it can fester and hurt. 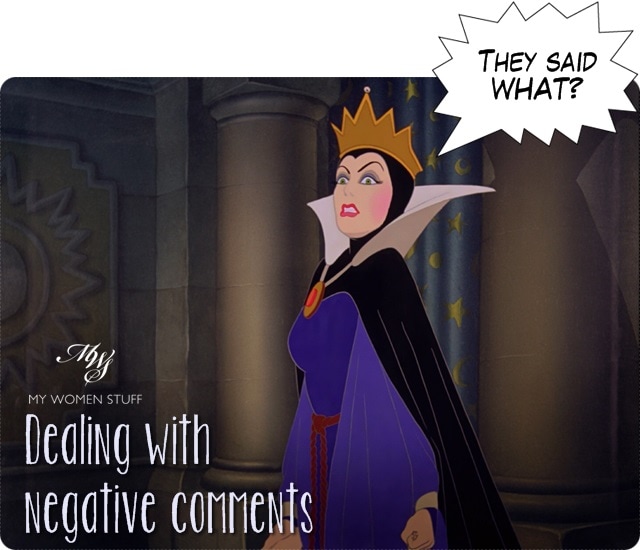 I half-kiddingly chalk these negative comments up to a mark of success. I don’t understand why success is equated with having to deal with negativity, but it seems to go hand in hand so let’s learn to take things in our stride.

So, how do you deal with these negative comments? Do you explode in a tirade of your own? Do you marshall up your supporters and get them to tear the aggressor apart for you and boost your own self esteem? Do you ignore and pretend it never happened? Do you delete the comment?

It’s easy to treat anyone who doesn’t agree with you as a “hater” but it isn’t always the case. Some comments are left by haters but sometimes, it could just be a question of poor communication. Sometimes, people just don’t get the message across in a tactful manner which can come across as abrasive when it may not be the intention. Some people claim to be “straight talking” which is just another way of saying “I call a spade a spade, so tough” which is also another way of saying “I sound rude, so?” So, taking a moment to analyze the comment to see if it’s a hater comment e.g. “You’re so ugly, you shouldn’t let your face be seen online” or one that is just harsh criticism “Your eyeshadow lines are harsh. You should have blended it better” helps you handle things better.

Don’t reply immediately – Sleep on it

Replying immediately, while in the heat of the moment may lead you to say/write something you may regret later. This is especially so if you may have misunderstood the comment or its nuance. So, I prefer to take a few hours or a day or two before I come back and reply it, if it justifies a response. By then, I’d have a clear head and hopefully be more coherent. Everything is better after a good night’s sleep 🙂

Easier said than done, but sometimes, what a hater wants is to make you react and quite often, it can show up your character as well. So, be polite, kill them with kindness. Not literally of course. But be polite. No one could ever be called out for being polite. I say “Thank you for your comment. I’ll take note of that for the future”. Stay classy 🙂

It’s a question of how you look at it, but if I were to receive a comment that says “You’re so ugly, you shouldn’t let your face be seen online” I’d just ignore it and not justify its existence with a comment. Quite often, it may never even be published because it goes against my comment policy and justifies removal as it isn’t constructive criticism. However, a comment like  “You should have blended your eyeshadow better” is one I will reply to. While it isn’t said in the most tactful manner, it could well be true once you stop seeing red. Accept the criticism, say thank you and move on.

Talk to a friend

Are you over-reacting? Quite often, we may be, so it is useful to check with a third party to see if they too think the comment is a poorly worded one or just a troll. A good enough friend will be able to tell you if you are justified to be pissed, or if you are just over-reacting. Keep a few of these friends around you. They’ll help keep you sane 🙂

There’s no need to go overboard with comments, replies or even dedicating a whole post to someone who leaves a negative comment. If you feed them, they will grow. If you marshal the forces of your readers to show up how silly the comment was, what does it say about you? Unless justified, I think it is akin to bullying, even if they started it first, and sure, you feel good that so many people agree with you. But what about the ones who stay silent? Quite often, they either don’t care or they are judging you. So, if it makes you happier, delete the comment. If you feel a reply is justified, reply and then forget it. It’s your blog after all. Why let other people take over how you feel about it? 🙂

I count myself lucky in that negative comments or feedback I’ve received are the exception rather than the norm *hastily touching wood*. I’m sure many people don’t agree with what I say, but they probably choose to remain silent. Of the ones I’ve received, most are harsh criticism which, once I have properly analyzed them, I accept. I may not agree, but I accept it. Nuances of language and tone of voice is lost in text. Or maybe I’m deluding myself 😉 But if it really pisses me off and is deliberately provocative, I delete it and forget about it. It’s what I have a comment policy for! 😉

Simple Blogging Tips are some simple tips I have for fellow bloggers, based on my own experiences. I’m no ‘guru’ but I hope they will help you. You may read up on previous Simple Blogging Tips here or please feel free to ask your question in the comment box or in email.

PREVIOUS POST: Antipodes Grapeseed Butter Cleanser : Warming up to a natural and organic cleansing balm
NEXT POST: Melvita celebrates 30 years (and I learn to cook a fancy French meal while learning of an organic sunscreen)