Home » Musings » 5 Seconds of Fame: Paris B and My Women Stuff on NHK World International TV!

I’m quite excited about this little piece of exposure I received yesterday, which was both nerve-racking as well being terribly exciting. I just wanted to share because this might just be the first and only time I get to be on international TV! So please excuse the narcissism. I promise this will be short.

But yes, I and my little blog were featured in a news segment on NHK World – the international broadcasting arm of NHK, Japan’s broadcasting service, and I was told that it aired internationally on Friday July 26, 2013 at about 8pm Malaysian Time (+8GMT)! The downer of course, is that I have no access to this channel LOL! I have come across it on satellite TV when I stay in hotels, so I knew it existed but domestically, I have no access.

So knowing it was available online was another bonus! 😛 Basically, I was contacted on Friday morning by Ms. Noriko of NHK World, to seek my comments on the Kanebo whitening product recall. You may remember I posted about the Kanebo product discontinuation a week or two back. It started with a report of 39 cases but based on the NHK World news report, this number is now about 7000 which took me by surprise. I haven’t seen many reports about it from anywhere and during our interview, I was told there was a reported case in Taiwan as well. I was very surprised when I was asked to comment on it because I’m no authority now, am I? I’m just a blogger blogging about beauty! 😛

Anyway, I received the email on Friday morning and agreed to a Skype interview that afternoon, which was my very first time using Skype (Yes, I know its mind boggling) and I only just about made it thanks to Twitter help from Tine!

I originally thought all they wanted was a phone interview. I didn’t realise video was on the cards or that it would be broadcasted! *cringe* On a side note, perhaps my mobile doesn’t need changing after all. quality seems ok even for TV LOL! 😛 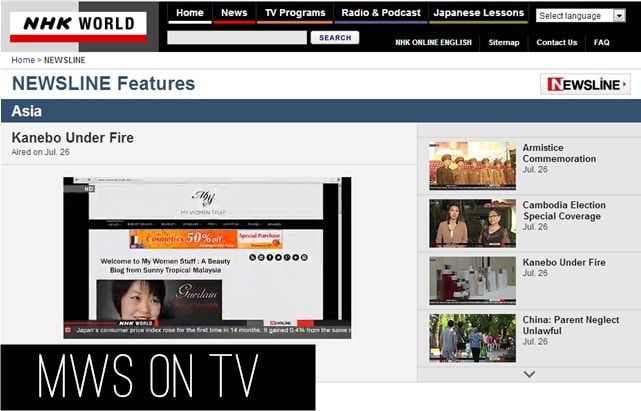 Surreal seeing my blog on telly!

We talked a bit about what’s happened with the Kanebo whitening product recall which is what the news report is about, and I was asked if whitening products were popular here in Malaysia and why I thought so. Quite stumped but I have had my theories about it for a while which I’d only aired to family and some close friends so I thought I’d put it out there.

This happened to be the blurb that they extracted *facepalm* So my halfbaked theory on why whitening products are popular in Asia or Malaysia are out there for the world to scorn. Ah, c’est la vie 😉

My theory is simply that being fair or having a light skintone has to do with historical and cultural beliefs of beauty here in Asia; that you are from a better social standing if you’re fair. Women of a higher socio-economic standing don’t have to go out and work the fields, or walk the streets. They can stay indoors and be transported places by covered vehicles. So, being fair has been equated to being beautiful, and subconsciously this has been passed down through the ages till now. And this is why whitening products are popular here in Asia.

So yeah, that’s what I say somewhere towards minute 1.24 of the clip which you can view at this link on NHK World. I can’t embed the video unfortunately so if any clever soul out there can help dig out the code, I’d appreciate it!

Its ok if you don’t agree with my views. We all will have our own 🙂

But that was me in the flesh in my office, my Friday casual makeup on (I actually wore a BB Cream because hey! It was Friday! And it was untouched up because I didn’t know I was going to be on TV *facepalm*) and really crappy overhead fluorescent lighting. If I ever make it on TV again to share more halfbaked theories, I do hope I get a proper makeover 😛

Thank you for letting me share my 5 seconds of fame, everyone.

53 comments ... Read or JOIN THE DISCUSSION