Home » Travel » Travel Tales: A Day Trip Into Kutná Hora – Its not just about the Sedlec Ossuary Bone Chapel! 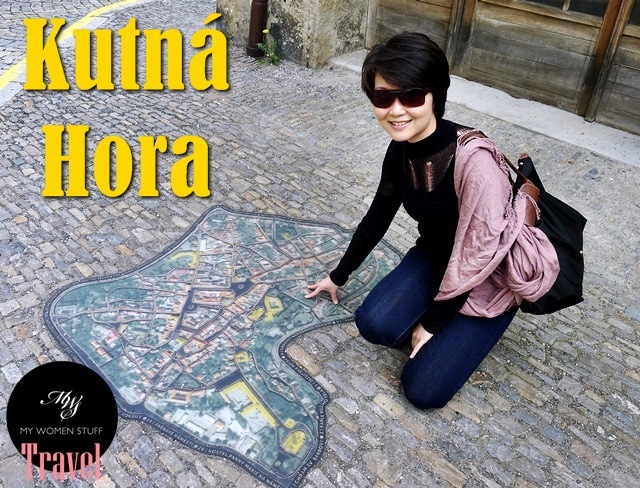 Hello fellow travellers, I’m revisiting the Czech Republic again. Seeing how I love to travel and seeing how so many of you similarly love to travel, I wanted to share a little more about my travels. Perhaps it might inspire your next vacation or perhaps you can inspire mine! :D

Before I visited Prague, someone I know had just gotten back not very long before that and from their photographs, I saw pictures of skulls and bones which sent shivers down my spine even as it intrigued the hell out of me. I wanted to see that too! A quick look through Google told me I should go to the Sedlec Ossuary (Sedlecká kostnice) and to the nearby town of Kutná Hora.

Kutná Hora is just about an hour out of Prague city and I read you can do it quite easily by train or bus. But I opted for a half day guided trip through a tour company I saw on the back of a brochure. All it called for, was for me to go to the Old Town Square in Prague at about 9.45am and look for someone holding a green umbrella. So I did and I found a lady holding a large green umbrella just as they said. The trip cost KC1290 (approx RM210) per person and included lunch, transport and a souvenir DVD haha… the last was quite unexpected.

So, here are some (ok, a lot of) pictures of this UNESCO Heritage town and what I saw while I was there.

I learned that Kutná Hora had, at its origins, a robust silver mining and silver coin minting industry. It used to be the second largest and most important city in Bohemia (old Czech Republic) after Prague and thrived economically and culturally. Its now a small little town and when I was there on a weekend, very quiet. I wasn’t quite sure where everyone was hiding.

Our tour started at Sedlec Ossuary so that’s where I’ll take you first. Be warned of rather scary photos ahead! 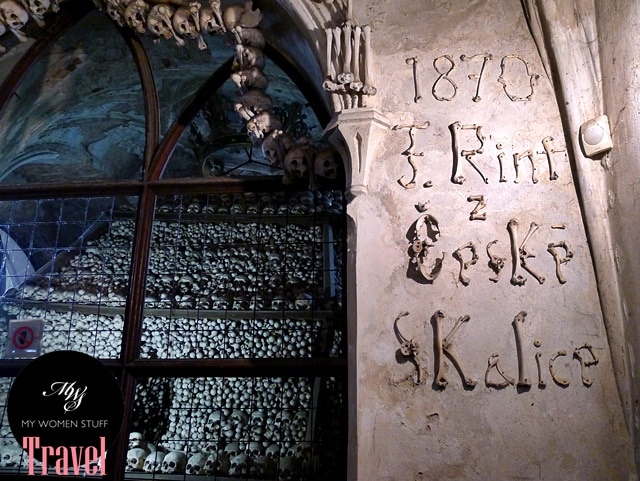 This is a little chapel just a few minutes outside the town of Kutná Hora in the neighbouring town of Sedlec. What makes it so famous and a must see, is that it is decorated with the bones of over 40,000 humans. That’s right. Human. Decoration.

Lest you think it a commemoration of something gory, it actually isn’t. The bones were of people living in the area who had been buried there for years, who had died of natural causes or the Black Plague or wars. When a larger chapel was to be built in the area, these bones were exhumed and instead of having them tossed aside, in 1870 the ruling Schwarzenberg family instructed a local woodcarver František Rint to put the bones in order. This was the result. There are 3 large pyramids in 3 alcoves of the chapel filled with skulls and bones and you can see the signature of the woodcarver above – F. Rint. An artist always signs off on his art! 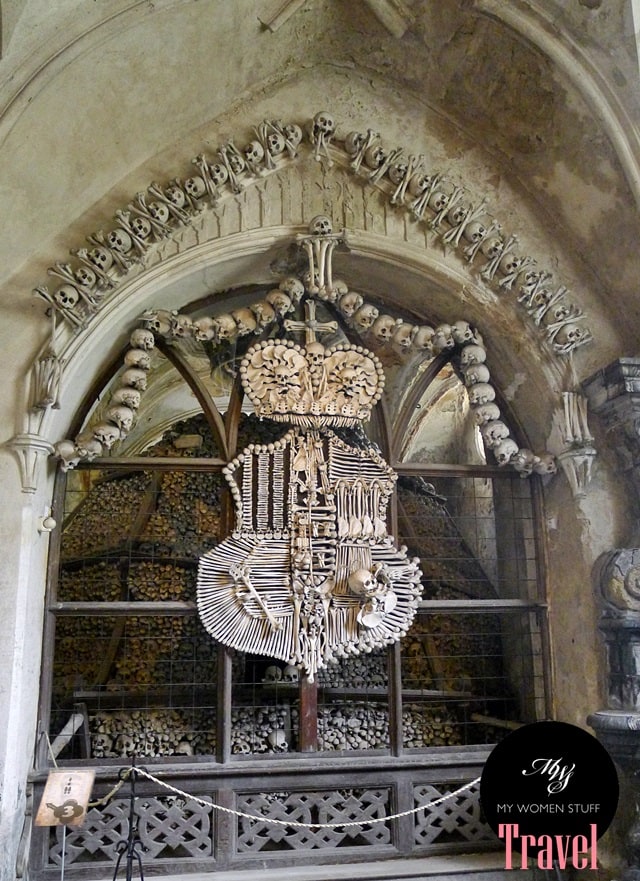 Because the work was commissioned by the Schwarzenberg family, they get their coat of arms immortalised in bone. 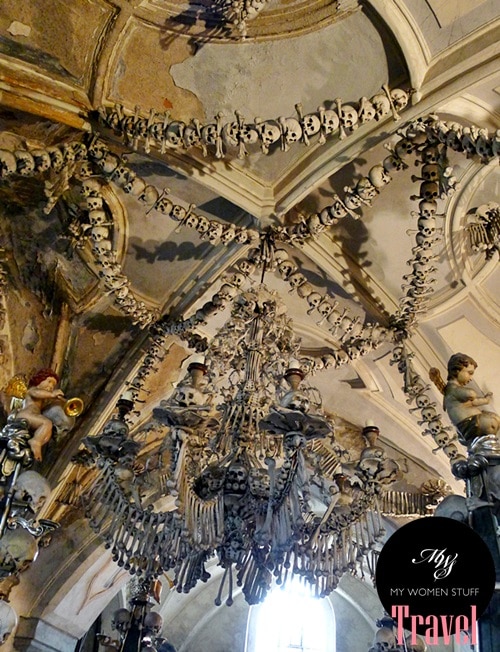 Look up and there above your head is a chandelier created with bone. I have to say the effect is quite awe-inspiring and rather chilling. However, I didn’t find it scary in the sense of being horrified by it as I thought I would be. Perhaps the bright sunlight streaming through the windows helped, but I didn’t linger too long either :P

We then headed into Kutná Hora town a few minutes away for a walking tour of the town. It is quite easy to walk around and it is quite small so half a day will more than suffice unless you are a history buff or want to spend more time in this little town. 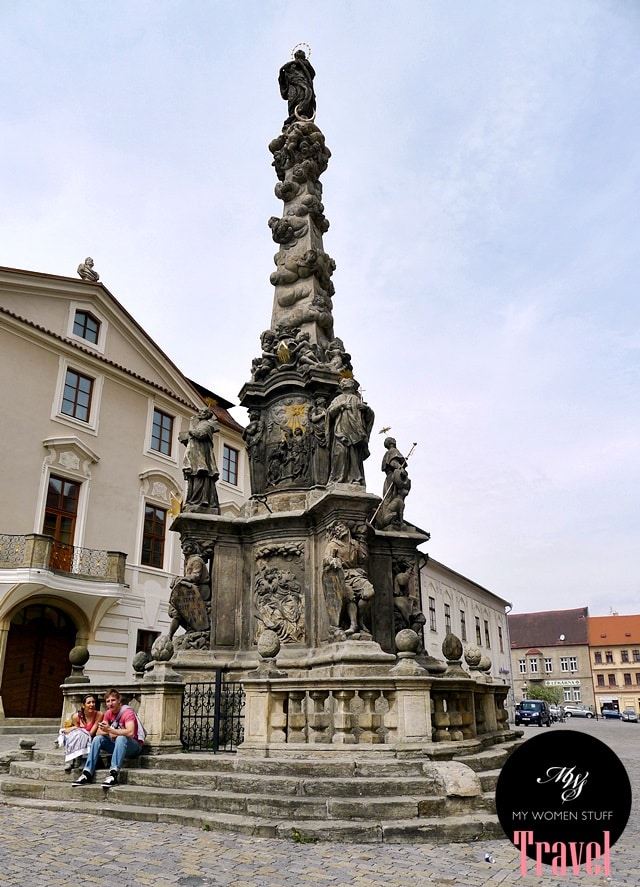 One of the first things we came upon was this column in the middle of the town. It was built in the 1700s as a thanksgiving after the end of the Black Plague which hit Europe very badly killing millions of people. It was a Saturday when I was there and the town was quite silent. There was no one about at all! 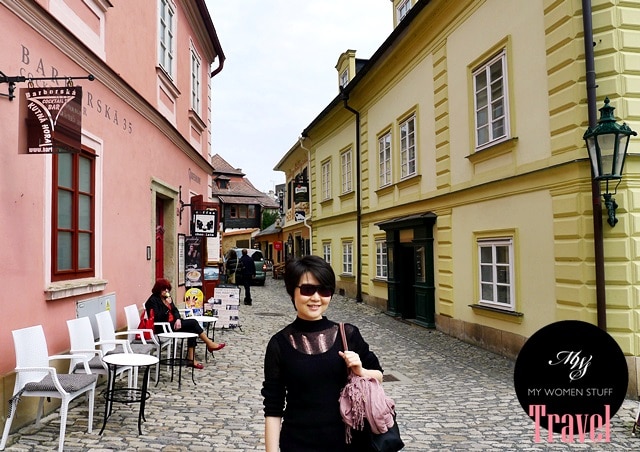 Being a UNESCO Heritage Town, it is very well preserved. The roads are narrow with cobblestones (watch out or you’d turn your ankle!) and the buildings retain their original facades where possible. I did notice that many buildings looked freshly painted or newly painted and were generally very well maintained. Must be quite something to live in such a historical little town! 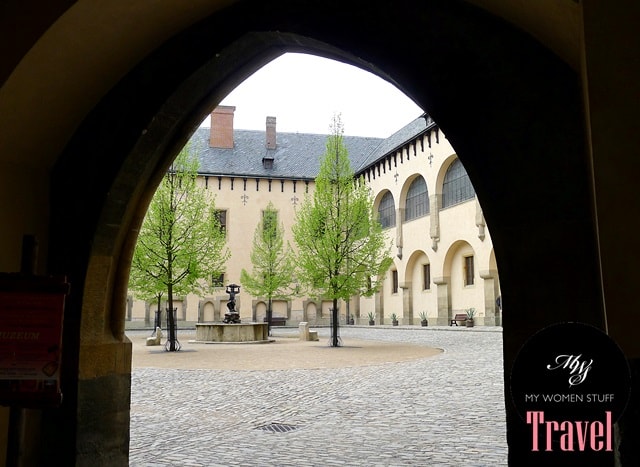 Peeking into the Italian Court which now houses the Town Hall. It used to be a royal palace and the seat of the Central Mint of Prague. There is a lovely little courtyard and the buildings are kept in very good condition. While I was there, there was a civil wedding ceremony going on and also 2 other weddings going on in the neighbouring churches. Truly, Spring is the season for weddings! :D 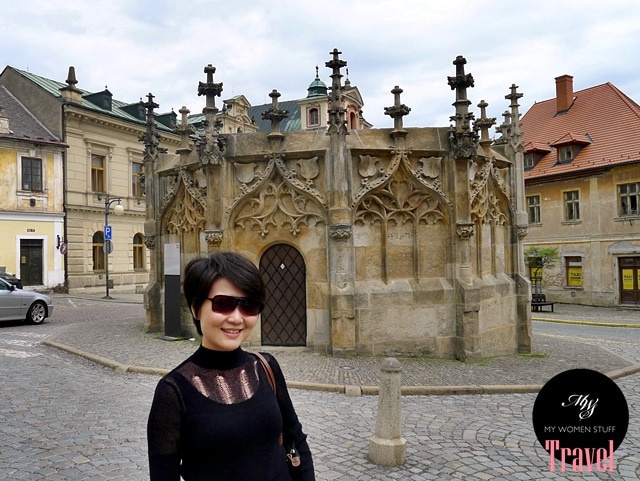 In the middle of the town, you will see this round stone building which looks like a very large crown. It is a Gothic Stone water fountain which was used as a water tank or reservoir in the olden days and has intricate carvings all around it. 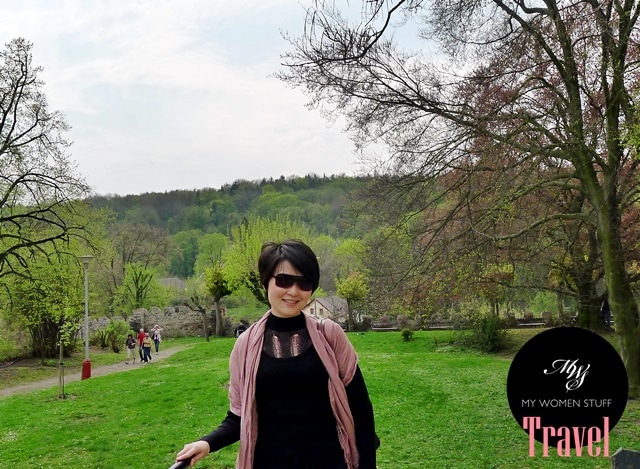 Here’s a gratuitous picture of the countryside of Kutná Hora that you will see if you just turn your head away from the buildings in the town. I love gazing at the countryside in Europe. Its so different from what I see here in the Tropics. We don’t get that sort of intense green nor the light green of budding leaves that are just coming to life after the long winter. Colours and sights like this are as exciting to me as viewing medieval buildings :D 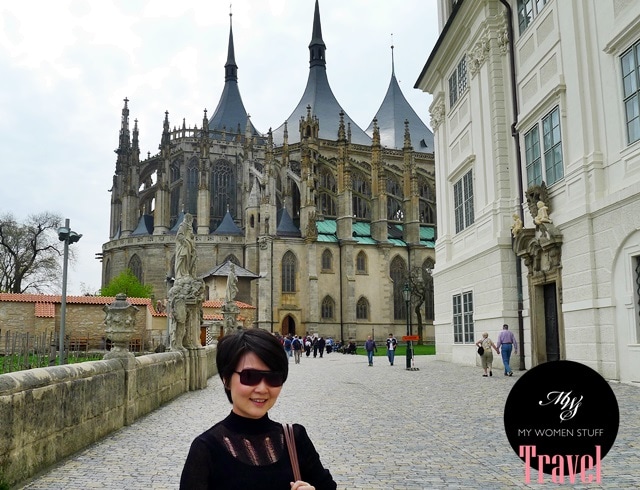 The final main sight in Kutná Hora is the St. Barbara’s Church which is a huge Gothic structure just a little way away from the town next to the large white Jesuit College. There is a walkway leading up to both buildings and just a couple of minutes walk from the town. Very pleasant when it isn’t too hot. When I was there, it was quite hot but I think in slightly cooler weather, it would be lovely! 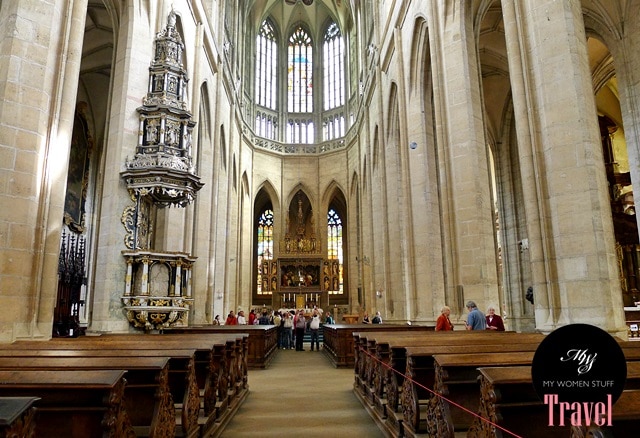 St. Barbara’s Church is, in one word, ENORMOUS! The vaulted ceiling was so far up, I had a crick in my neck trying to look at all of it. St. Barbara is the patron saint of miners which is fitting for Kutná Hora since it is originally a silver mining town. Apparently construction started in the 1300s but wasn’t completed until the early 1900s. Contractors eh? :P

St. Barbara’s Church is supposed to be one of the most famous Gothic churches in central Europe and is in itself a UNESCO Heritage Site. There is so much to take in in there. From the awe-inspiring tall stained glass windows….. 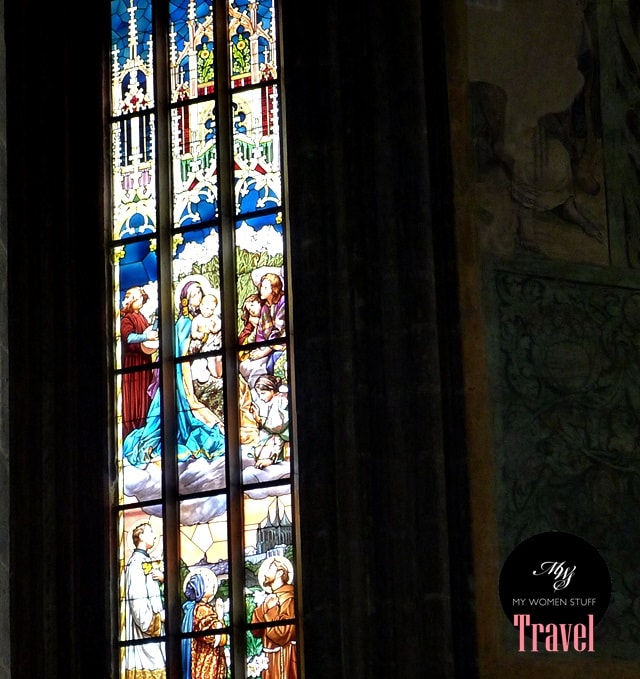 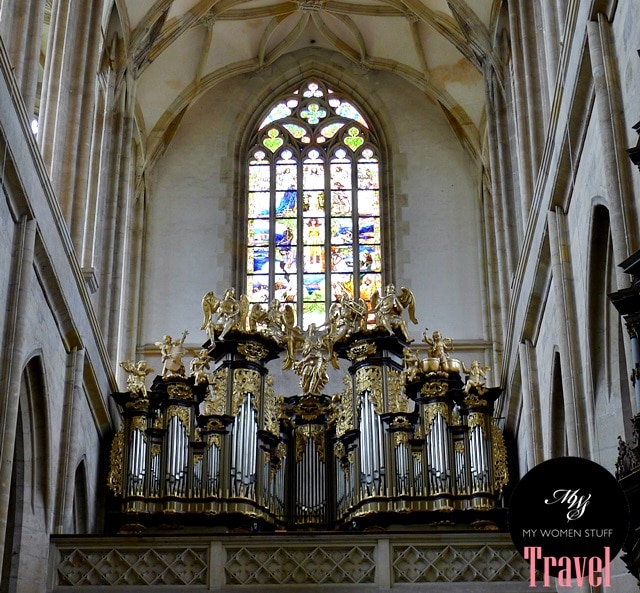 The organ and church is still in use and often for weddings or ceremonies. There was no wedding being held while I was there, unfortunately as I would have loved to hear the organ in action. 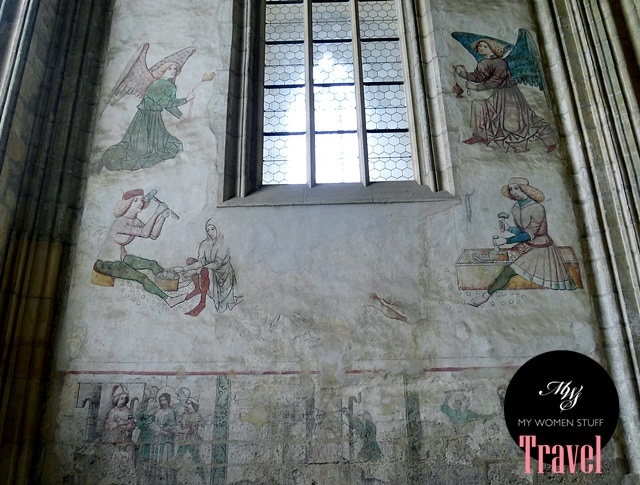 On one wall are some old paintings/frescos that caught my eye because they depicted silver coinmakers at work! You can see the silversmiths hammering away on the left and minting coins on the right. You don’t always see this in a church where religious paintings usually rule the day, not normal day-to-day affairs. But it is a wonderful way for us in the future to have a glimpse at what went on in the past :)

And that, my friends is my little day trip to Kutná Hora! :D It is a lovely town to visit, and a nice day trip away from the busy city that is Prague. If I’m to be honest, there isn’t all that much to see and do, which is why I suggest that you take a guided tour. The guide will give you the historical background to what you are seeing and that will make it mean more to you rather than doing it yourself, because you’d then go “Oh look, another building that I have no idea what it is about” :)

Now, be honest. You’ve just scrolled back up to Pictures No. 2, 3 and 4 to stare at the skulls and bones right? ;)

This is Part 2 of my chronicles of my visit to Prague, Czech Republic. You can read my suggestions on 10 things to do while visiting Prague here. Or read more Travel Tales here.