Home » Musings » It has been the best of times and the worst of times: What’s been going on with me? 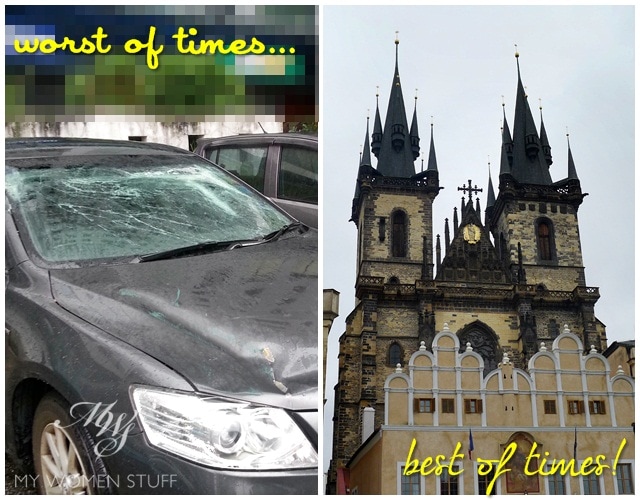 Today, Malaysians go to the polls so I wanted to just keep this light and easy because Heaven knows, its heated enough out there! 😛 I thought I’d share a little about what’s been going on and why I had a little cryptic message on my blog 2 weeks ago and just why things have been up and down here at MWS central with the regular blog schedule all over the place.

First off, I had a freak accident that resulted in my car being quite badly damaged. No one was hurt and I don’t want to dwell on details but suffice to say that it was and still is a horrible time, the car is still at the service centre for repairs and there’s a lot on my plate to have to deal with a lot of crap. I tell you, people will try to wriggle their way out of paying money if they could! I’m trying to make sure that doesn’t happen. Its what’s my time is mostly taken up with now which I hope explains why blogging wasn’t top priority for me in the past couple of weeks. I’ll get better at managing time, promise (too much backlog to catch up with, but I hope this explains the why)

Freak accident aside, I was also away on a vacation to a city I’d been wanting to visit forever, ever since I can remember. I was in Prague, Czech Republic and I had the best time of my life! 😀

I don’t know when I got the idea that I had to visit Prague. It might have something to do with the fact that in school, I had a pen-pal from Czechoslovakia as it then was. We corresponded a while, and I remember her telling me about how beautiful her city was. We lost touch a few years later, but the worm of an idea of visiting the country wriggled its way into my head and stayed there. 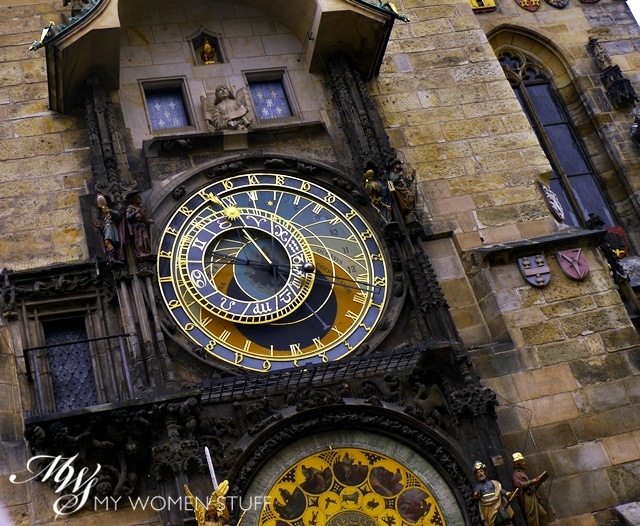 Its taken quite a few years for it to happen, but happen it did! I would love to tell you a little more about what I did there, what I saw and just how much food I ate (OMG! The meats!) but I can’t do it in one sitting. There’s just so much, and I don’t know how interested anyone is in knowing what to do there or visit there. This isn’t a travel blog after all, even if I love my travel very much but I might split it up over a few weeks – just let me know when it bores you, or you can tell me what you want to know too 🙂 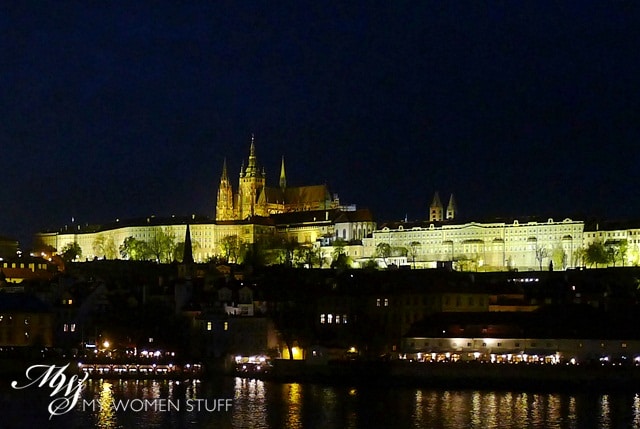 Prague Castle by night as seen from across the river

Suffice to say that I love the city. Its beautiful and romantic. There aren’t many cities in the world where you get a beautiful castle overlooking a river or a fairytale atmosphere in the old parts of the town. I had a great time getting lost in the little cobblestoned streets, turning round a corner and going “Oh! I was just here a few minutes ago!” I loved the history and how well preserved everything is because Hitler apparently loved the city so much, he wanted to preserve as much of his retirement home as he could. 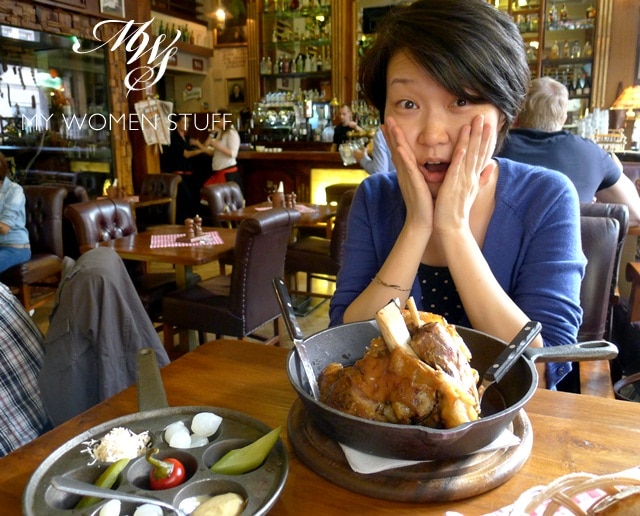 I enjoyed the food a lot even if it was mostly just meats the size of my face and beers in tankards bigger than my usual capacity. I had been warned ahead of time to “leave at home your notion of greens” and truly, greens aren’t the Czech’s top 10 foods. 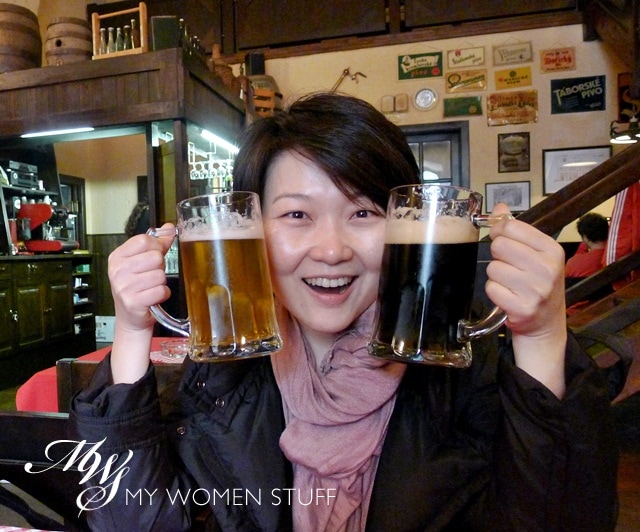 If you’ve never eaten a “trdelnik” I highly recommend it, especially from a little bakery called Krust, just off the Old Town Square. There are other stalls selling it but the best I had came from this bakery even if its a tiny bit pricier than other places at 60CZK (approx RM4). I had one almost every day. Yes, I’m now fatter than when I left – don’t judge 😛 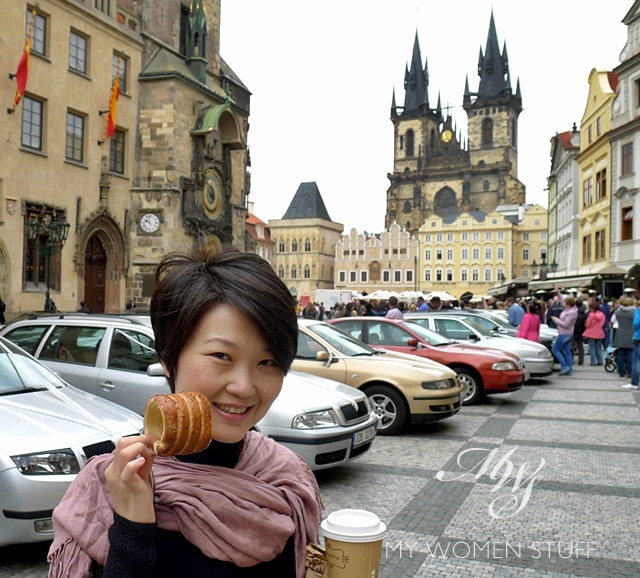 Ahoj Trdelnik! You made me fat (but I forgive you because you’re so good!)

I also went out of the city to 2 other nearby towns of Kutná Hora and Ceský Krumlov – the former has a most interesting church decorated with bones of over 40,000 humans. Yes, humans. Wanna see pictures? 😀 The latter is a UNESCO Heritage Site and to me, a fairytale town where I sat by the river in the cool sun, having a lunch feast while watching ducks and with a view of the castle. Quite a perfect afternoon 😀 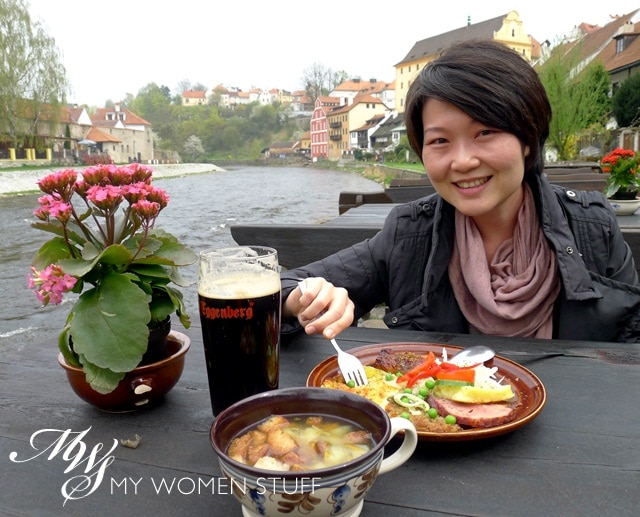 I went without having much of an idea of what to do, where to go, what to see (due to my trauma) but it all turned out for the best, and I even had time to slip in some shopping 😉 Special shoutouts go out to Charlotte at Lipglossiping and A, a lovely reader who lives in Prague (who I had the chance to meet!) for helping me with my many questions. That, free wifi and a pretty affordable data mobile phone package helped me get around and I had a great time.

Have you been to Prague? Is it in your list of must-visit cities in the world?

Its been on my list for the longest time and I was very happy to finally book my tickets and cross it off. I would love to return some day. If I lived in Europe, I probably would. But as I don’t, it’ll just have to be a quick stopover next time 😉

70 comments ... Read or JOIN THE DISCUSSION