Home » Eyes » Eyeshadow » Twins: Double the trouble or Double the fun? You decide in the Dior Twin Set Eyeshadow Pens

Shadow-cum-eyeliner or cream shadow makeup items aren’t new in the makeup world. I’ve come across it in Japanese makeup and one of the most popular ones is the one from Stila, if anyone remembers that. This Spring, we see a similar cream eyeshadow-powder eyeshadow pen offering from Dior tied up nicely with a Cherie Bow 😀 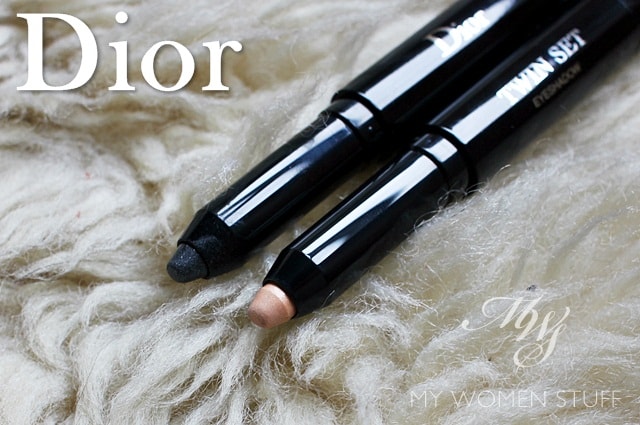 These are the Dior Twin Set Eyeshadow pens that come in 4 shades. Its a fat pen, rather akin to that of a mascara tube, housed in sleek smooth shiny plastic. One end houses a cream eyeshadow in the form of a fat pencil and the other has a fat foam sponge applicator dipped into powder eyeshadow.

The 2 colours I have here are 060 Grey Sigh and 530 Beige Ribbon. Both are very neutral, very wearable shades and the principle behind is has a little bearing in the Dior technique of eyeshadow application. You may remember that a while ago, I shared with you some makeup tips from Dior and one of the tips was about the use of eyeliner, or a cream eyeshadow as a base for powder shadow.

This is a tip primarily to help your powder shadow stay on longer, but if you ask me, works best if you do not have oily lids. If you have oily lids, you are better served using an eyelid primer. This then, is the principle behind the Twin Set Eyeshadow pens. A handy dandy pen contraption that allows you to layer on powder shadow over cream, to achieve richer, longer lasting colour. I’ll also tell you that one of the colours work better for me than the other 😉

The picture above shows the cream eyeshadow end of the pencil. I’ve used both so the sharp, pristine edges have been worn a little smooth with wear. It comes with a flat tip and sharp edges all around. Once used, it takes on a softer, rounder tip. It is a twist up mechanism so no sharpening is necessary. 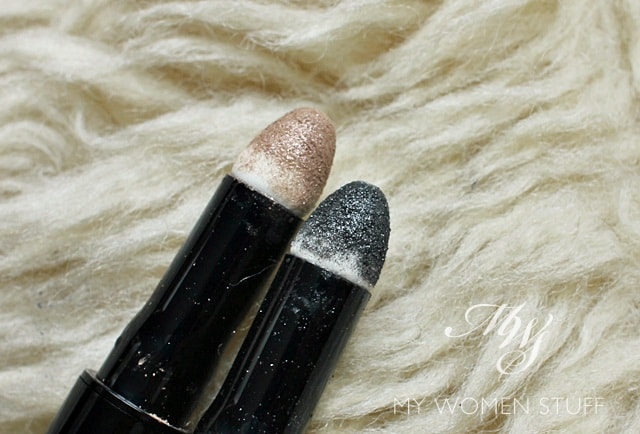 At the other end of the pencil houses the foam applicators which are kept embedded in powder eyeshadow in the cap. I tried to capture a picture of the inside of the cap but couldn’t get a clear shot. If you squint, you can see the powder in there. When you remove the cap, the powder is stuck on the foam applicator which you can then dab over the cream shadow.

As you can see from the photo which I deliberately did not clean, there is quite a bit of fall out so it can be a wee bit messy.

I sought the advice of a Dior makeup artist to find out the best way to use these Twin Set Eyeshadow pencils and I was told that you should use it to layer. Apply the cream end on your lid first, and then layer on the powder shadow and blend away the edges. The cream base will provide a tacky base for the powder to grab onto. If you attempt to just use the powder, you will find that very little adheres to your skin and if its a dark shade, expect to see fall out. 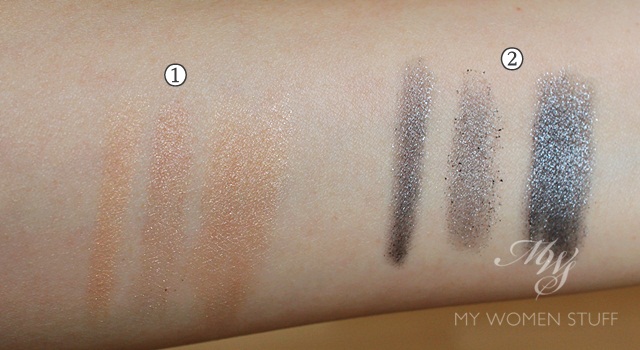 I showed you some swatches before, but here, I show you the powder shadow layered over the cream base. You can see that on their own, the colours are sheer and not very exciting. When layered however, the colours look more intense and really pop.

A brief description of the colours based on my observation are thus:-

Of the two, my preferences lies with Beige Ribbon for a few reasons – it gives a very nice polished look and is perfectly enhanced and set off by a nice eyeliner and mascara, fall out isn’t noticeable and its not too noticeable when the colour wears off in the day, and its not glittery. Grey Sigh makes a passable smoky eye in a pinch, but the fall out kills me.

Did I say fall out? Yes I did. The powder shadow end of the Twin Set pencil is a bit of a mess, if you ask me. I find that even lightly patting it on my lid, I find some powder falling on the area around my eyes or my cheeks and removing is quite a pain because you risk smudging the rest of your base. So with Beige Ribbon, fall out isn’t too noticeable as it is with Grey Sigh. I sighed a lot while trying it on because the two times I used it, I ended up taking far longer than I would normally take with a regular powder eyeshadow.

Would I pick these up? Well, I’d be hardpressed to at the asking price, sorry. Its nice but it is pricey. If you do plan to try it anyway, try Beige Ribbon because I think its the easiest and least frustrating of the 4 to use and better yet, it travels amazingly well! I just returned from a short holiday (yes, it will explain my inability to keep up with the comments and with the blog but I’ll share that story another day) and I took Beige Ribbon with me. In the morning, all I did was slap on some BB Cream, layer on some Beige Ribbon and I was all ready. For the evening, when I had the lovely opportunity to meet with a reader (more on that later too!) I did the same and included eyeliner. I liked the soft glow it gave my lids and made me look less tired than I probably was. At least I hope it did 😀

The Dior Twin Set Eyeshadow pens are dual ended pens with a twist up cream eyeshadow stick at one end and a foam applicator saturated with powder eyeshadow on the other. The best way to use them is to layer the powder shadow over the cream and they can be worn alone quite easily. Of the two I had, I found that 060 Grey Sigh was markedly more glittery while 530 Beige Ribbon was more satiny with understated shimmer. I did experience fall out which is noticeable in a darker shade but not so in the lighter shade. Ditto creasing although I managed to take it for about 6 hours before showing wear. I don’t really have a problem with creasing and cream shadows so I will advise those with oily lids to ensure your lids are primed with lid primer before using these.

Pros: Easy to use, Handy and portable, Beige Ribbon has a nice texture and makes my lids look better and I look more awake

Who will like this: Anyone who wants a handy portable eyeshadow product and does not mind shimmer 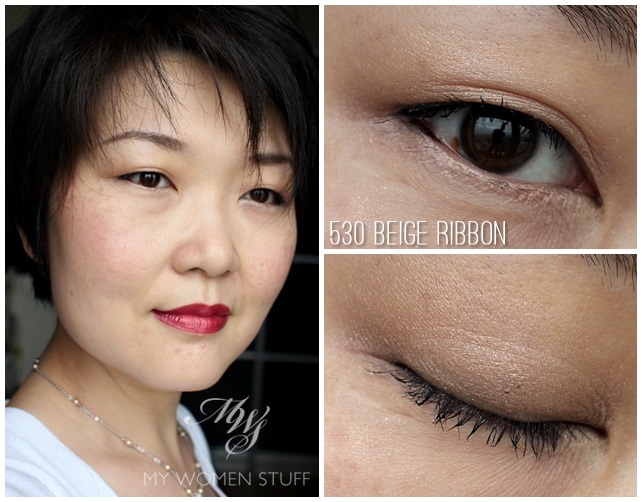 Here’s how Beige Ribbon looks worn. As you can see in the close up on the right, it doesn’t look like very much on the lid. I found however, that with nice black eyeliner and mascara, a fresh pink blush and a bold lip, it helps you look polished thanks to the unobtrusive shimmer. Best of all, its such a super quick look to pull together. Perfect for those “OMG! I overslept!” mornings. Don’t lie, you’ve had some of those I’m sure! 😉 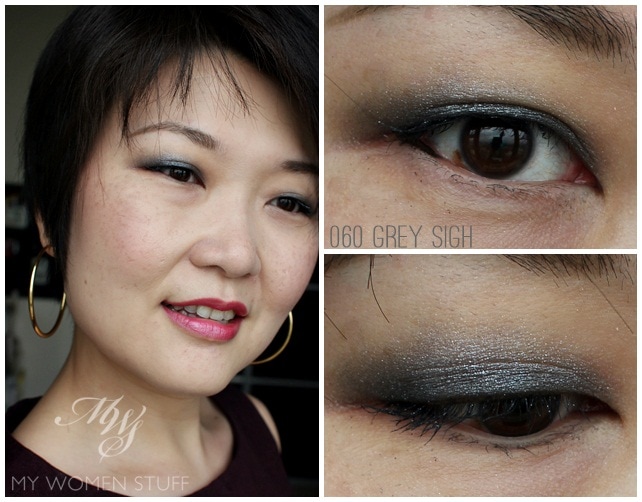 Grey Sigh is a bolder eye and as you can see on the close ups on the right, which I have deliberately left untouched up, there is fall out around the bottom of the eye. The colour however, is lovely being at once bold yet very wearable and not quite as intense as a black smoky eye would be.

You may also notice that the shimmer is pretty intense in this one which is good and bad. Good, if thats what you want and I can tell you that its very very pretty. Bad, if what you wanted was something a little more wearable in a conservative work environment. I also experienced a bit of creasing with this colour towards the end of the day so I’d say it wore well on me for at least 6 hours before it showed wear. Not too bad, but it couldn’t quite last till the end of the day. I actually find it a bit messy for a smoky eye, but its sort of pretty 😛

Do the Twin Set Eyeshadow pens interest you? Did you pick any up?

I mentioned that there are 2 other shades in this set aside from the 2 I’ve featured here. You can view 090 Fishnet Black at Messy Wands and Mostly Sunny and 840 Ballerina Pink at Makeup and Beauty Blog. I don’t think these a must have, but they are, as with all makeup, nice to have. It is a bit more bother than its worth, to be honest. But do check it out in person if you can to see if you like the texture and how they handle and importantly, expect fall out and then you won’t be disappointed 🙂

PREVIOUS POST: Thinking Positive: Love yourself! What do you love about you?
NEXT POST: Spa Visit: So Thai Spa in Bangkok – 3 Hours of Affordable Luxury