Home » Fashion » Jewelry » Time will Tell: The oversized watch trend that I just cannot seem to get into 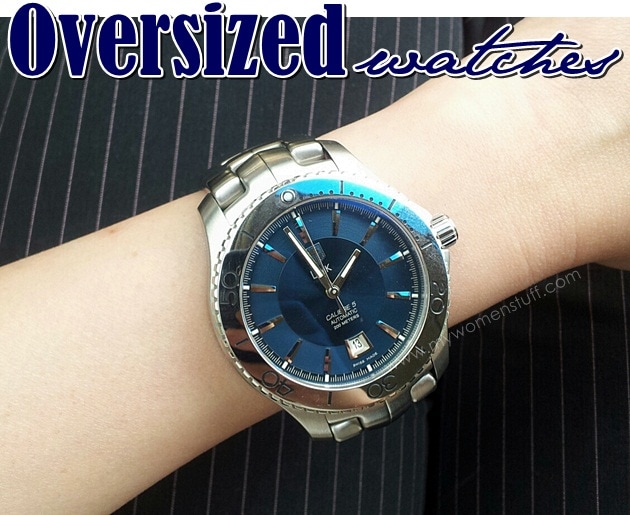 I accompanied a friend to a watch sale during the week, where I saw a very paltry selection for women’s watches. Rather, smaller watches for the admittedly smaller wrists of women. There were lots of women happily snapping up (and depriving, hah!) the men of the watches on display though, and the lady manning the counter told me it was just “in” for women to wear a large watch instead of a smaller one.

Many women were going for the oversized watch look which is very trendy now and which I believe has been so for a couple of years now. Whilst many fashion brands do make oversized watches for women, heading to the men’s selection gets you an instant oversized watch from a reputable watch maker without the fuss.

Yet, I could never get into the trend for a very practical reason – wrist size. Have you?

A few years ago, I actually wanted a large watch. But I soon realised that being blessed (or cursed, whichever way you look at it!) with a small wrist, I just could not comfortably wear a watch with a large face.

Often, the face would extend beyond my wrist which just looks wrong. A watch face larger than your wrist. Hmm…

Also, I found that metal straps (which I favour) have a minimum number of removable links and if you remove them all, it doesn’t look balanced. As for leather straps, few places would punch me an extra hole because then the remaining strap will wrap all the way around to the other end of the watch. I know, it was awkward.

So I gave up. I’m fussy about watches, preferring only to go for proper watchmakers, not fashion watches so unbelievable as it is, selection from a good watchmaker for a medium sized watch face, is quite limited. And then, I stopped wearing watches.

I haven’t worn a watch for at least 3 years so I just didn’t see any reason to start again. Still, I do like seeing women wearing clunky oversized watches. If I had the wrist for it, or could find a watch that fit, I just might. But till I do, I’d just admire from afar 🙂

Are you into the oversized watch trend? Do you wear a watch daily?

I like how it looks and I’m still looking for one that will work with my wrists. But I rarely wear a watch daily. I stopped because the battery in the watch I was wearing ran out. I eventually got an automatic one that didn’t need batteries but by then I’d forgotten what it was like to wear a watch, so I haven’t. You?

PREVIOUS POST: Win! Send a Gift of Christmas: It is better to give than to receive
NEXT POST: Exploring The Hobbit connection with the Antipodes Aroha Natural lipstick in Remarkably Red

50 comments ... Read or JOIN THE DISCUSSION