Home » Interesting Discussions » Your Say: What’s the worst Makeup or Skincare mistake that’s ever happened to you? 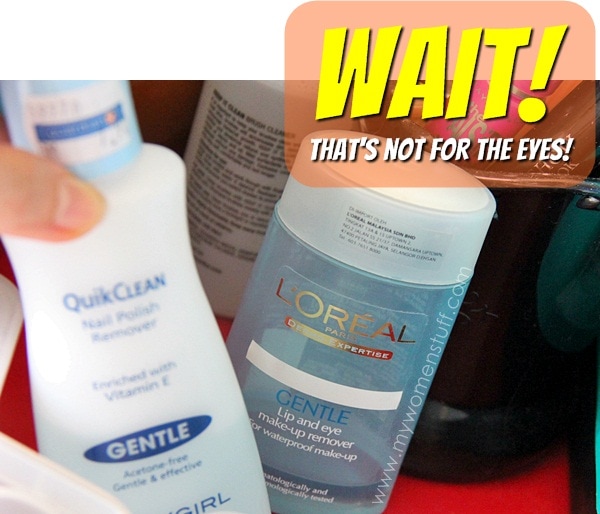 I’m not quite sure what happened, to be perfectly honest. I was tired, yes but not exceedingly so. It wasn’t terribly late, but I’d had some furniture delivered, and I had been clearing up my spaces. I was about to have my shower, when I realised I still had my makeup on from the day. (For the record, the Kanebo Lunasol Water Gel Foundation is seriously something. So impressed!)

So I reached for the first blue bottle I saw on the counter, picked it up, thought it smelled funny, wet a piece of cotton pad, laid the cotton pad against my eye … and promptly ran screaming for the bathroom. It BURNS!

Even as I ran cold water from the tap over my eyes, I could not help wondering why my regular Lip and Eye makeup remover would suddenly turn on me. I wondered if I had accidentally cut my eye lid.

It was only a few moments later that the strong, unmistakeable smell of nail polish remover cut through the fog in my brain. “I just put nail polish remover on my eye!!” You know when people say “/facepalm” but they just say it? I had a literal /facepalm moment right there.

There doesn’t seem to be any lasting damage, thankfully. I had closed my eyes to remove the eyeshadow and mascara, and had almost immediately rinsed it off my skin. I was almost afraid to open my right eye lest I had gone blind but fortunately, it all seems to be good.

I now keep my nail polish remover in a separate room. Not taking my chances again!

Oh and for the record, nail polish remover sucks at removing eye makeup 😉

What’s the worst/most painful makeup or skincare mistake that has ever happened to you?

On a scale of 1-10, this has had to be a 10 on the scale of pain, stupidity and now that I’d told you about it, acute embarrassment LOL!

PREVIOUS POST: Kick up your heels at Le Grand Bal and keep dance partners close with Dior Grand Bal Carnet de Maquillage
NEXT POST: Time Out: Time for reflection and to enjoy the now

85 comments ... Read or JOIN THE DISCUSSION