I love perfume ads… most of the time. Some are incredibly well executed, filmed as a mini movie. It usually involves a women, a man, romance, luxury, sensuality – everything that makes me want to at least take a sniff at the scent. Might it transport me to exotic places? Attract a stranger on a train – ships passing in the night?

And sometimes we get duds – obscure, abstract clips that make you wonder “Is that an ad for a perfume?” Have you seen the one by Gucci Flora? A lady violently swinging her arms in a field of flowers, causing them to bend and ripple in the wind? That was, I thought weird.

And sometimes, we get Brad Pitt for Chanel No. 5. 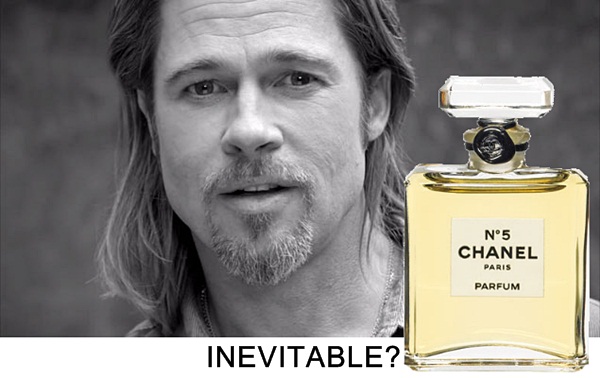 When the news broke about Brad Pitt being the face for the 90+ year old bestselling and iconic Chanel No. 5 perfume, I raised an eyebrow. I wasn’t sure how a man could make me want to buy Chanel No.5, which doesn’t sit very well with me to start with.

And then the first ad came out, and my other eyebrow went up in incredulity. If you have not yet seen the ads, I have both here for your viewing pleasure 🙂 The man was reportedly paid US$7 million for this campaign. Does he make you want to run to your nearest Chanel counter?

Oh the picture above is a still from the ad so that’s Brad, in his unshaven, unclipped glory. Not quite what I envisaged from the House of Chanel.

I don’t know. I feel that its sort of creepy. The whole black & white film, Brad standing in a gray room (US$7m isn’t bad just for that you know) soliloquizing about the world turning and journey endings… I think I got lost about 3 seconds into it. I have no idea what he’s on about, even is his voice is soothing, almost perfect for a voice over for a documentary about the animal kingdom.

At a push, I could explain it. In a very abstract way. But nah. At the end of the day, its not an ad that will sell a fragrance; it is the tester at the counter, how it smells on you, and how you feel when you wear it.

I could never wear Chanel No. 5 and am not a fan of Brad Pitt. So I guess this ad was quite lost on me!

As bad as I think the ad is, maybe its what Chanel intended. After all, its what everyone’s been talking about for the past week, even if they cringe and make a face whenever they do mention it; but I suppose bad publicity is still publicity? 😛 As I reminded a friend, the man has something like 7 kids to feed, I think the $7m does come in handy 😉

64 comments ... Read or JOIN THE DISCUSSION