If you thought 3D was all you had to worry about, L’Oreal now introduces the concept of Lash Architect 4D – a false lash effect in 4 Dimensions. Honestly. 4 Dimensions? Is the Dungeon Dimensions a reality? (Discworld fans, wave your hands ;) ) 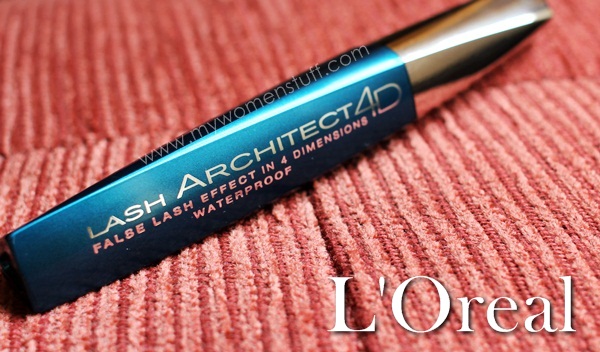 In all seriousness, the 4 Dimensions L’Oreal refer to are – Volume, Length, Texture and Curl. Basically, this would be everything you ever need or want in a tube of mascara…. And its waterproof. That should make it 5D, right? :P

This mascara caught my eye not so much because of its claims, but because of the pretty metallic teal colour of the tube. What can I say, I’m shallow that way :P I happen to find this particular shade of teal very soothing, and paired with the metallic cap, I say its a very attractive piece of work.

The problem with mascara is that it is one of those things which need to be used. Staring at the lovely packaging isn’t going to make my lashes look any better. So do you reckon the performance lives up to the packaging?

I like the wand. Its slim and the bristles are dense and are able to catch most of my short lashes quite well. 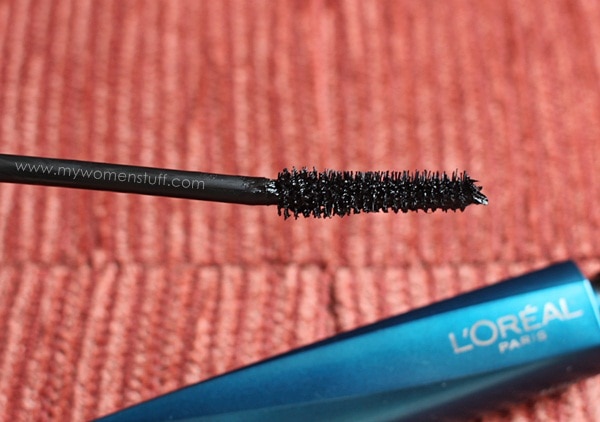 See how the wand is fitted at an angle? It is very slight, but it actually makes it easier to use, for me. I find the angle helps it get my lashes more easily, and also helps it get into corners and the smaller lashes.

This also happens to be a long mascara wand. The brush bit is quite long, and so is the whole composition of the mascara so I found it took some getting used to. But I actually found that I liked the length. 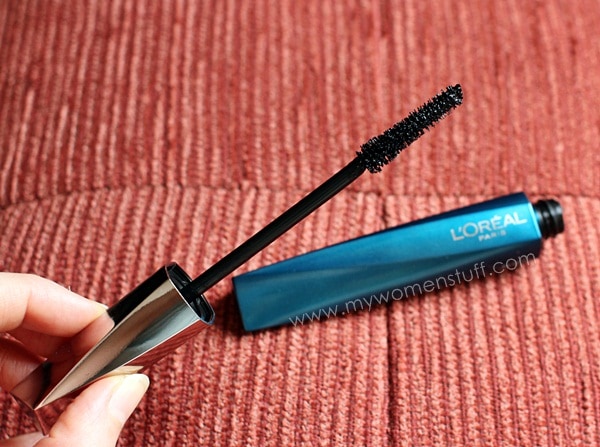 I found that the length actually allowed me better control, and I could actually be more precise with my mascara application, compared to a shorter handle. It was strange but a good sort of strange.

Unfortunately, although I initially had quite a good impression of this mascara, I found it didn’t quite live up to its promises, nor did it give me the sort of lashes I like to have. There was volume. I appreciated that, because I have short lashes. Volume and the deep black of the mascara formula allows my lashes to be seen.

However, I did not experience much length and as for curl, it was non existent if I did not first curl my lashes. When I apply it to curled lashes, it helps the curl stay for a couple of hours. But by the end of the day, my lashes are back to being straight. 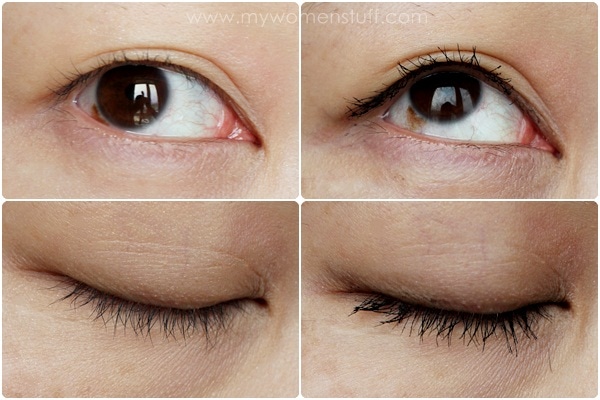 So whilst the deep black works to help my lashes look more visible, the formula just didn’t do too much else for me. I also found the formula a bit clumpy. Despite this being a waterproof formula, I found that it would actually smudge on me. I tried it on a day when I had no other eye makeup on except this mascara. I did not even go out in the sun and was in an exclosed mall for about 5 hours. After about 3 hours, I realised that the bottom lid was smudged and it had to be the mascara. I had nothing else on.

I think this one may be more impressive on someone who has longer lashes than I do, or someone who prefers volume to lengthening. For myself, I’d stick with Maybelline The Falsies :)

The L’Oreal Lash Architect 4D mascara promises length, volume, texture and curl. I experienced volume and I like how black the colour is. It makes my sparse, short lashes look more visible. However, I did not experience any curling effect nor lengthening. I found that although it initially held up my curled lashes, it did not hold it up throughout the day so my lashes would have straightened out by the evening. Also, this smudged on me, and really, this isn’t a problem I have at the best of times. I think the construction is good – the long handled brush makes it easy for me to apply the product to my lashes, but the product itself could do with a little more work.

Pros: Long handled wand made it easier for me to apply product, Brush was easy to use and applied product to lashes easily, Deep black colour made lashes look more visible and volumized, Pretty tube colour!

Cons: Smudged on me after a few hours, Does not hold a curl very well, Does not make my lashes look impressive, Pricey for a pharmacy product, Formula was a little clumpy

Who will like this: Anyone who already has long lashes and wants a dramatic effect

I will continue to use this, not because its great, but because it serves its purpose as an everyday mascara. Also, I already have it and its not so bad that I’d bin it immediately. If I’m not looking for something dramatic (believe me, it takes a LOT to get drama out of short and skinny lashes) and just want an everyday look it’d do. But I personally think you could get a similar effect out of a Maybelline mascara and it would cost less. Just sayin’ :P

I usually go to Maybelline for my drugstore mascara fix or the Revlon Grow Luscious one. For some reason, I never really used any L’Oreal mascara, maybe because of the price. Its a bit pricey for something from the pharmacy that will last you 6 months. I pay RM90+ for a department store one that lasts me a year and makes my lashes look like I have falsies on. I guess that’s the difference :P

PREVIOUS POST: What I Wore Vol. 2: The Dress With a Hole
NEXT POST: Your Say: Do you take vitamins or health supplements?