BB Creams are something I still do not quite get, all said and done. Yes, I have my faves that happen to come from 2 different ends of the price spectrum – Dior and Garnier and you do not get more diverse than that! I much prefer using a liquid foundation because to me, that’s what a BB cream aspires to be. Fans will of course disagree, but that’s how I roll ;) 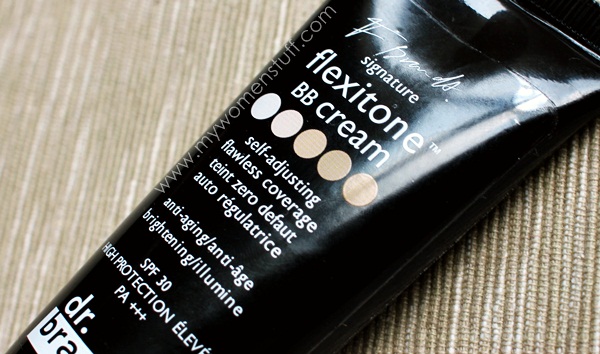 Quite interestingly, here on the bandwagon is American brand Dr. Brandt with their own version of a BB Cream. The Flexitone BB Cream, as the name may imply, offers a formula that enable it to match to all (or rather, most) skin tones while offering anti-aging, radiance and smoothness and moisture to skin. All this, and SPF30 PA+++ to boot. Sounds promising right? Let’s see how it fares.

Packaging wise, it comes in a small 30ml tube with a flip top cap. I have a bit of problem with this method of dispensing the cream because you will invariably dispense too much. I always do, and it gets messy. For future reference, I think a nozzle type dispenser or even a pump is better.

More interesting however, is the claims of a one shade fits all product. You see, I have a lot of beef with most brands of BB Creams. There is no such thing as a one shade fits all, no matter what anyone says. With Korean brands, I get a grey cast most of the time (I generally have beef with most Korean BB Creams) and anyone who is above a medium skin tone can forget about trying a BB cream. Few exist for darker skintones.

Well, this one claims to be able to suit all skin tones. How they do it is by using pigment colour capsules that only break open when applied on your skin so it “self-adjusts” to your skintone. During the product launch, the 2 models used had different skin tones – fair and dark. It actually did look seamless on both and I was impressed. Unfortunately, I was less impressed when it was applied on my skin. 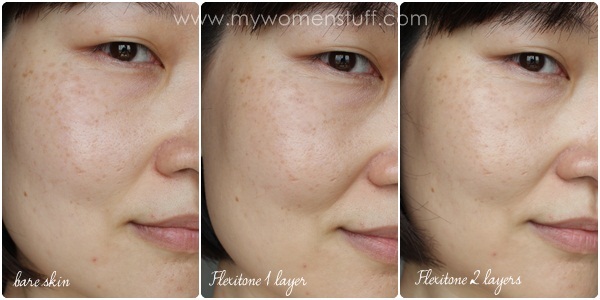 This unretouched photo shows you what happens when I apply 1 layer on my skin and when I layer a second layer.

I don’t know if you can tell, but the colour tone of my skin takes on a bit of a yellow cast when comparing the first and third photo. 2 layers does give a more beige/yellow cast to my skin. Over the day, if I have on more than 2 layers, it oxidizes so my skin starts looking dull. One thin layer doesn’t react, but as you can see, coverage is minimal. Its not bad, in that sense if you don’t mind touching up with a bit of concealer on the parts that matter. It helps to even out redness but it is quite minimal.

In terms of colour, I’d say the Dr. Brandt Flexitone BB Cream may be suitable for most skintones but not for the very fair or very dark. For those in-between however, its pretty much fair game.

Another thing I noticed is that if the product is left to settle for a while (I couldn’t use this often no matter how hard I tried) the product tends to separate. The first time it happened, I thought it had gone off. But then I noticed on the tube that it said to shake before use, so I shook it up and thereafter it was alright. So, do read instructions :P 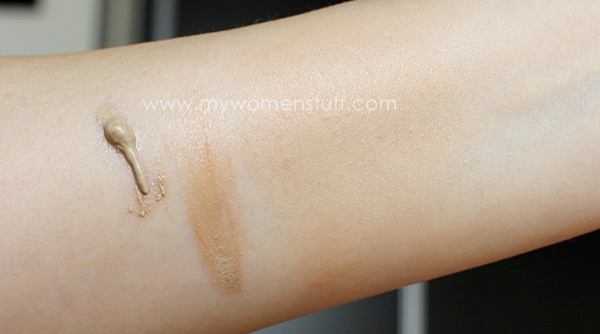 Based on the swatch, you can see that it pumps out a grey-beige. Once you start to spread it out (middle swatch) you start seeing the colour appear. I found that the colour was too orange and on very fair skin, its very obvious on the skin. On the far right is a swatch blended out. You can see that the colour is less orange but still a shade darker than my skin tone. If I continue blending it out further, it will eventually be thin enough to blend into my skintone but then the coverage is pretty much non existent. So if you share my skintone, then I think this will not be suitable for you.

Texture wise, it is good. It is not oily at all, does not turn oily over the day and feels comfortable on my skin. The SPF30 PA+++ rating is fair, but I personally think you would not use enough of this for it to matter so it would be best to use a separate sunblock under it.

I think this would be something for those of medium to dark skintone who want to try a BB Cream but can never find one to suit their skintone. Many Asian brands offer shades that are just too light. This will fill that gap so no one gets left out :)

The Dr. Brandt Flexitone BB Cream is a BB Cream that claims to suit all skin tones. The texture is lightweight and comfortable without turning oily nor feeling heavy on the skin. The sun protection content is also relatively high. The cream does colour adjust, once you start spreading it out. I saw that it looked natural on someone with dark skintone so this may be an option for someone of darker skintone who wants to try a BB Cream. However, on me the colour ended up looking dull and too beige/yellow so I hesitate to recommend this to anyone with pink undertones or who is very fair. Also, I think this is an option for someone who already has relatively good skin and needs little coverage.

Pros: Light non oily texture, A bb cream for those of darker skintones,

Cons: Will not be suitable for those who have fair or pink skintones, Product tends to separate so be sure to shake it up before use, Pricey, A pump or nozzle packaging would be better 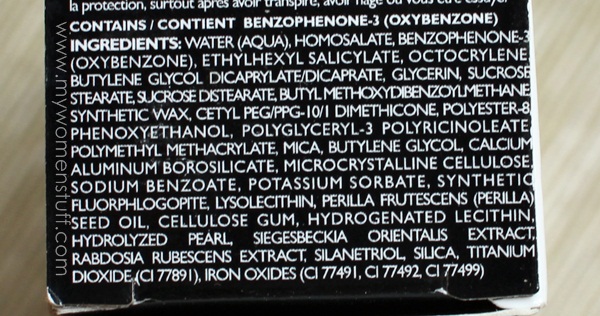 Have you come across the Flexitone BB Cream? Do you still use BB Creams?

I hardly use BB creams even if I do have those I like, which some people scorn for not being “true” BB creams. I sometimes use them on a weekend or on a weekday if I feel like it. But otherwise, I’m all for foundations and there are loads I like in that category :)

Disclosure: Featured product was from a press launch. For posting guidelines please read my disclaimer.

PREVIOUS POST: Your Say: Do you take vitamins or health supplements?
NEXT POST: Laneige Water Bank Skincare: Banking on water to moisten and hydrate skin