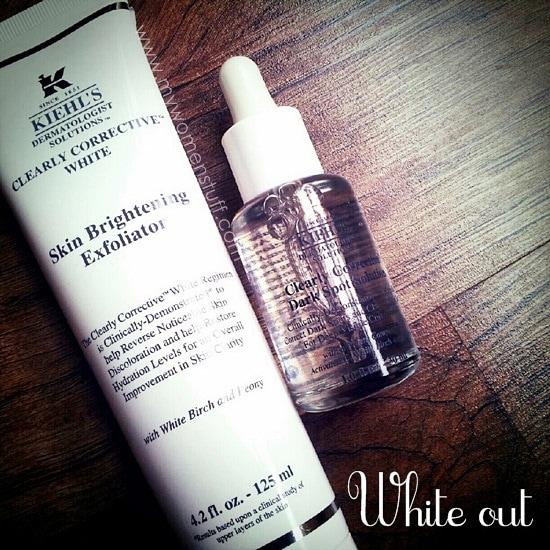 I’m starting to incorporate some whitening products back into my skincare and I decided to try the Kiehl’s Clearly Corrective Dark Spot Corrector because a) that clear liquid really really intrigues me and b) it smells of lavender!

I do read a lot of good reports from those who have tried it, so I do hope it’ll work for me. Heaven knows, my skin could do with some brightening. I was also interested to note that one of the first products I ever tried from Kiehl’s has undergone a change!

The Clearly Corrective White Skin Brightening Exfoliator used to be the Ultimate White Exfoliator which I really enjoyed using. A tube lasts well forever and I think it was close to a year before I eventually tossed it out, not because it was finished but because I just felt keeping it past a year was too much 😛

I used to even use this exfoliator on rough bits of skin on my body like elbows or knees or just on my arms. Hey, if the brightening works, my arms could do with some exfoliation too 😉 I am not sure if the formula has changed or if I will like it as much as I did the Ultimate White version but I’ll report after I’ve given it a go.

Its still early days for me. Something like day 2 using it 😛

Insta-Updates: Snippets of my life which I bring to you from my view of the world through my camera lens in Instagram under ParisBMWS

PREVIOUS POST: I’m gonna soak up the sun… or maybe not with the Biore UV Aqua Rich sunscreens
NEXT POST: According to Max Factor Lip Art is all the rage and you’ll flip for their new Flipstick lipstick