Home » Musings » What would you do when seeing someone being beaten up? Is it self above others? 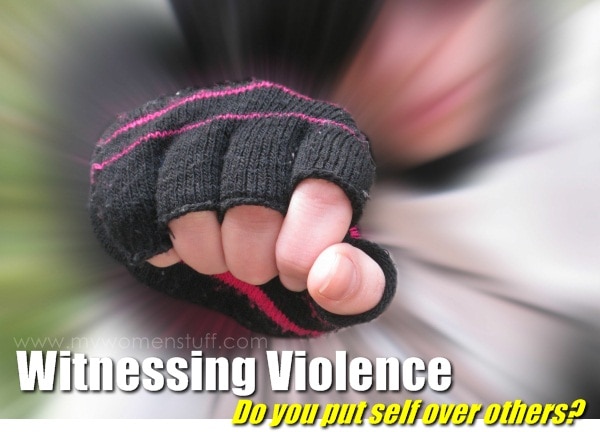 (Note: This post isn’t remotely beauty related in any way (could be women related though) so if you feel it isn’t relevant to you in one way or another, you may want to skip it or read something from the archives that is. A beauty related post may come up later if I feel up to it.)

Yesterday, while walking in the city after lunch, I came across an incident that left me sobered in many ways.

Walking towards me on the narrow pavement were 3 guys who, at first impression, I thought were just guys joshing around, pushing each other back and forth. But some instinct made me stop in my tracks and observe the situation further, and that was when I noticed that it wasn’t mere joshing around, but there was some sort of struggle going on. Of the 3, one was holding one of them in a chokehold, while the other was roughing him up and slapping him around. I was in a bit of a dilemma at that point. Instinct and everything moral you have ever been taught tells you that you should step in and help. Self-preservation warned me to not even think about it.

I wanted to move forward but it would mean having to pass them and I didn’t want that. So I decided to brave the traffic, and stepped out on to the road, sticking to the side. Walking past quickly, the guy being beaten up looked up at me, bleeding and asked for help.

But I couldn’t say or do anything, just walked on, promising myself that I’d get to the police. There was a police van or booth not 50m away. I would get help. But by the time I got to the end of the short pavement, the police were already running out towards the incident. Someone else had reported it and they were on the case. But by this time, the 2 guys had run off, leaving the victim behind. Perhaps the growing crowd forced them to stop and leave.

But either way, the incident left me with a heavy heart and an all round feeling of helplessness.

Not getting involved was probably the right thing to do. The aggressors were 2 rough looking characters. I was with a friend but we aren’t trained to help people in these situations and as I told myself thereafter, I’m not hero material. If it was a movie, I woud have been cast as “Curious Bystander #2” not in the starring role of “Glamorous Heroine trained in martial arts” Getting involved would have put myself and my friend in danger.

Yet with every moral fibre of your being, you know that you should help. Or do something to help. It is “the right thing to do”. Witnessing physical violence of that nature outside of a movie screen is numbing and surreal. Having someone beseech your help is equally, if not more surreal and unsettling.

On the other hand, the first rule of personal safety is not to put yourself in a situation where you may endanger your own life. You, as a passerby, do not know the history of the quarrel. Was it a quarrel? Was it a fight? Did the victim steal from the other 2? Was it just a random mugging? It was in broad daylight along a busy road in a busy part of town. What prompted it?

All I know is that it has left me feeling unsettled and not a little doubtful and selfish. Righteous little me always thought that the noble thing to do in a circumstance like this is to help the victim. But when push came to shove, I couldn’t, wouldn’t and didn’t.

It was also sobering to know that if the victim was me, similarly, no one may help too. I do not believe that its just a reflection of society here, but is liable to be seen in cities everywhere.

Is there a moral behind this story? I don’t know. Can you find one?

Have you found yourself in a similar situation, and if so, what did you do? What would you have done?

Stay safe and thanks for indulging me so I can get this off my chest.

Note: Thank you everyone for sharing your thoughts in the comments. I will not be replying each individual comment as there isn’t much for me to add. I trust we will all do what’s best for ourselves and any victim given the right set of circumstances. It was insightful reading so thank you for sharing 🙂 xx