Today is the fifth day of the fifth lunar month, which happens to be the Dragon Boat festival or Rice Dumpling (zong zi, bak chang) festival because traditionally, it is at this period that we see these delicious packages appear. Traditionally. These days, these rice dumplings can be found the whole year round. Sort of makes them less special 😛 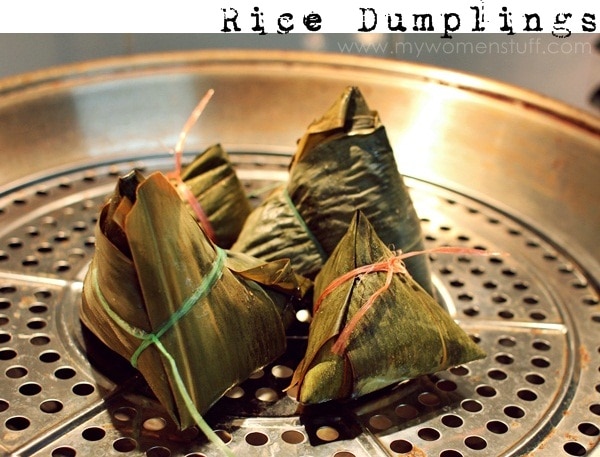 Still, I don’t eat them often, because I’m a bit of a traditionalist (and I’m not that much of a fan of commercial ones 😛 ) I grew up with my late grandmother’s rice dumplings which were to me, the best I’d ever had (every family will have a similar story I’m sure!) Each pyramid package was chockfull of goodies – braised meat, mushrooms, chestnuts, dried oysters… just barely held together with glutinous rice and wrapped in bamboo leaves, then boiled for hours to cook.

Are you a fan of these traditional rice dumplings, or what I call bak chang? 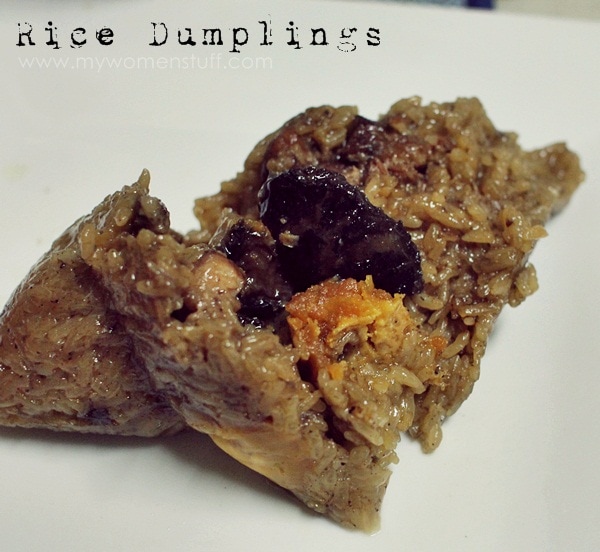 Here’s what the inside of a regular “Hokkien” style rice dumpling will look. There’s chunks of meat, mushrooms and some salted egg. Commercial ones tend to be heavy on the glutinous rice and lacking a little in the filling department, but this was quite tasty. I like eating it, hot from steaming, with some home made garlic chilli paste. Absolutely nostalgic and delicious! 😀 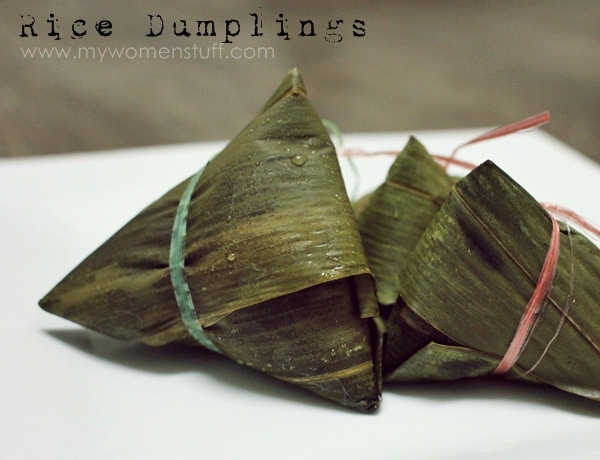 These rice dumplings come in different packaging – pyramids and rectangle parcels are 2 common variations found here. Contents and tastes vary too. There are sweet versions and every family who makes these will have their own additional “secret ingredient” that makes it taste good.

The origins of these rice dumplings are steeped in history and are said to commemorate the death of a famous Chinese poet Qu Yuan who was a Minister much loved by the people. He drowned himself after his King wouldn’t listen to his advice about the war on the border of their country, but being so beloved of the common people, they threw rice filled dumplings into the river so the fish wouldn’t eat his body, and rowed dragon boats to look for his body. Hence the start of this tradition 🙂 Truth or not, it makes for interesting storytelling right? 😀

If you’d like to learn how to make your own bak chang, here’s a recipe from Delicious Asian Food – a friend’s blog. I’ve seen the amount of work that goes into it and I’m not up to making this one at home 😛

Scrumptious Saturday: One day in a week where I indulge in my other passion – food!