Everytime the subject of mascara comes up on the blog, there will be no shortage of readers who suggest their faves from Majolica Majorca. Majolica Majorca, a very popular Japanese drugstore brand from cosmetics giant Shiseido is very well known for their mascara. They are supposed to perform well, hold up a curl, stay on through a hurricane and are notoriously hard to remove. You may however, have noticed a lack of coverage of the products on my blog. 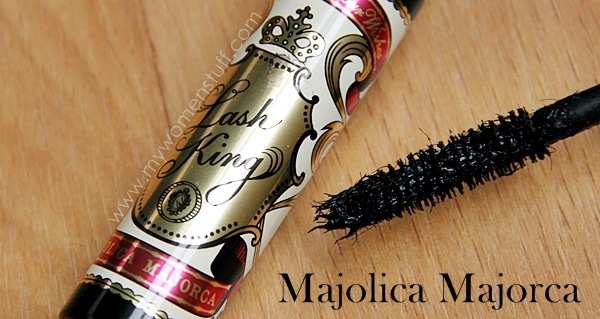 The primary reason is because I can’t use a lot of their makeup, in particular their eye makeup. The shadows and all the various mascaras make my lids feel heavy and irritated. Once I worked it out, I stopped looking at the brand. Why look at something that will only irritate you eh?

But recently, I had the opportunity to try the then newly launched Majolica Majorca Lash King mascara. Ok its been available since April but I have a good reason for coming in only 2 months later with a review. Well, I think its a good reason 😛

You see, I didn’t like Lash King when I first used it.

It was being raved to me as the “King of mascara” and that it would do wonders to make lashes look longer, thicker, more fluttery, more feathery, more … more… more…! The only reaction I had when I first tried it (with great trepidation I might add, due to my “allergy”) was “Wow! My eyes feel normal! They don’t feel heavy and tired and irritated!”

3 hours later, some fibres got into my eye and then I got seriously irritated. 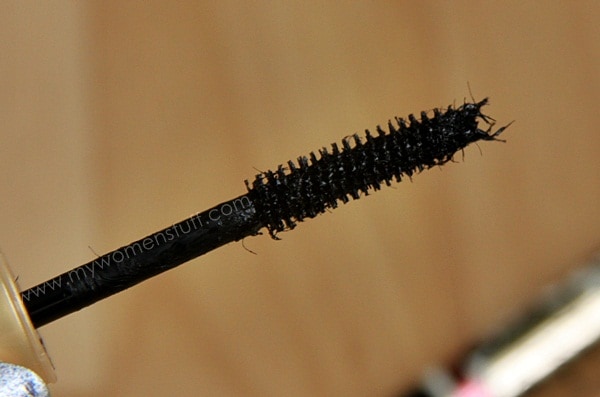 The brush is a little big, and considering that this is a mascara that promises volume and length and curl, there is a lot of fibre in it. Its only to be expected, really. There’s no other way to add length to lashes.

However, one day on Twitter, I noticed that Ms. Candy said that her Lash King was performing better after 6 months than it was when she first got it. So, I decided to let my Lash King mascara wait. I didn’t want to trash it outright. 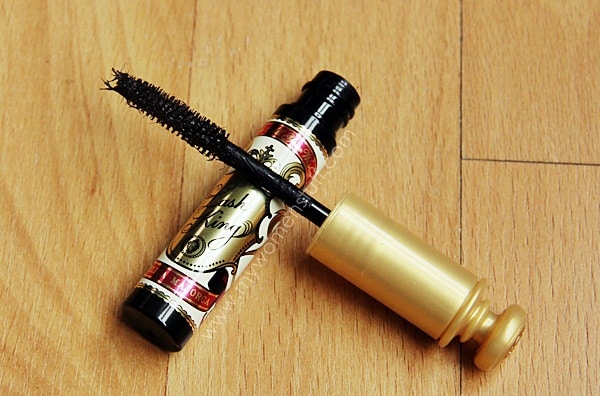 I’m glad I let it wait. Its been about 2 months since I got it, and if I might say so, the texture of the mascara is now just so much better than it was before. Where it was always wet coming out of the tube, it is not so wet now. The slightly drier formula suits it better, I feel, and for some reason, it stopped getting too clumpy too. Yes, there is still a lot of fibre, and that glob at the end of the wand is still there, but I wipe it all off on the side of the tube and the bristles of the wand coupled with the slightly drier mascara formula just work better. The fibres also stopped falling into my eye!

This time, 2 months later, I actually saw the benefits of the Lash King mascara. I curl my lashes beforehand and Lash King helps hold my curl all day, while adding length and some volume. Its not quite Va-Va-Voom! but it does make my lashes more noticeable, more fluttery and just make my eyes look better. It also seemed to apply more easily!

The proof as they say, is in the pictures 🙂 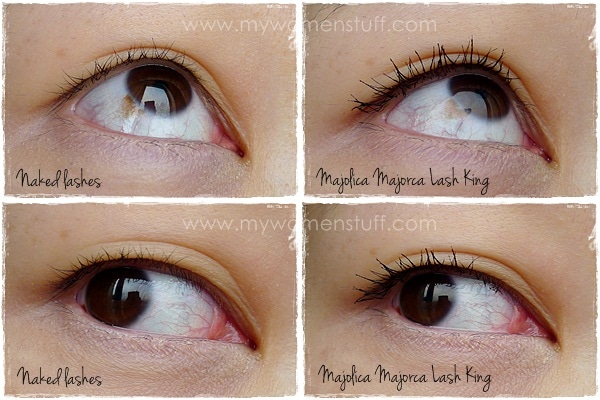 My lashes almost certainly look more defined and longer, don’t they? Not by very much. I don’t get a false lashed effect but enough for me to be quite happy about it. Short lashed gals will appreciate this one.

And remember my earlier statement that Majolica Majorca mascara are notoriously hard to remove? Well, this one isn’t. It removes very easily with any regular waterproof eye makeup remover and I have no problems with it at all. One more thing I noticed is that my lashes feel soft even with the waterproof formula. Sometimes, waterproof mascara make my lashes feel “crispy” if you get my meaning. This doesn’t. So I quite like that too!

The Majolica Majorca Lash King mascara is the newest addition to the Majolica Majorca mascara range. It is supposed to deliver length, volume and curl. I find that it does on all counts but I preferred the texture and feel after about 2 months. The initial formula felt wet and would smudge easily, and fibres would drop into my eye. As the formula dried out a little, it seemed to stay on better, stop smudging and no fibres dropped into my eyes. I also felt that my lashes then looked better with it on. I experienced no discomfort with this mascara and am quite happy to use it and maybe even repurchase. Although I’d have to let it dry out before actually using it. Hmm…

Pros: Lashes look longer and have more volume, Holds a curl all day, Lashes feel soft and not stiff despite the waterproof formula, Easy to remove with waterproof eye makeup remover

Cons: Wand is a little fat for my short lashes, Mascara tends to glob at the end of the wand, Initial formula is a bit wet, smudges and fibres drop but it dries out after a month or so and performs much better then

Who will like this: Those who want their curled lashes to stay curled all day, Those who want a mascara that gives volume and length, Those who have short lashes and want more noticeable looking lashes that don’t look too fake

Weighing in at RM59.90 a tube, I can’t in all good conscience say that this is the most affordable mascara out there. But it does do a good job after a spell, and I don’t see it drying out any more quickly than most (less quickly than ZA that’s for certain!). I have been using it daily since I discovered how nice it was after that initial bump in the road and I’m happy with it. I would however, wait till it goes on sale before repurchasing 😉

Have you tried the Majolica Majorca Lash King mascara? What did you think of it? I can’t compare it to the other formula, naturally. I used the Wing Neo something or other once before and HATED IT. It was the most horrible mascara I’d ever used, irritated my eyes and was nothing but floaty fibre. I binned it not very long after. I have in fact a long ranty draft post about it in my draft folder but lost my photos so can’t blog it 😛 But Lash King has redeemed Majolica Majorca mascara a little for me. I won’t give up my Shiseido Perfect Mascara for this one, nevermind the family business but I’m happy to use this for everyday.

PREVIOUS POST: Latest IT Bag The Celine Luggage Tote : Fad or Fab?
NEXT POST: Can taking probiotics cause your skin to break out and develop acne?

48 comments ... Read or JOIN THE DISCUSSION