PB Says: Peach_’s first post here is a review on the Shu Uemura Festive Rouge nail polish duos which were released in the Wong Kar Wai Christmas collection. We unfortunately do not get the nail polishes here in Malaysia. However, they are an idea of how you can paint your nails for the coming year end festivities using your own colours and glitter shades. 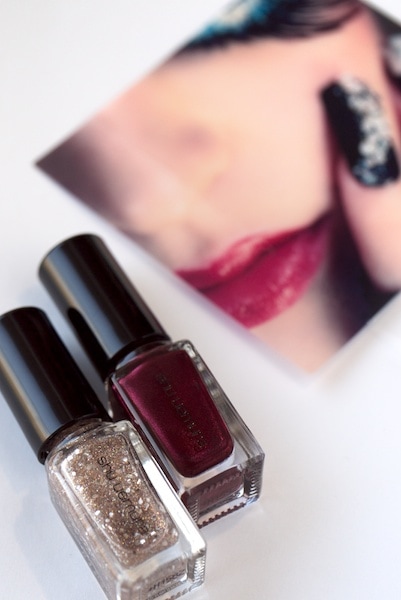 For Christmas 2011, Shu Uemura, together with filmmaker Wong Kar Wai, made it easy-peasy to adorn ourselves with party-ready nails. Part of their collaborative collection (introduced by ParisB here) includes nail polish duos with a solid color and a glittery companion, and I excitedly played with a red and gold combination, appropriately named Festive Rouge. 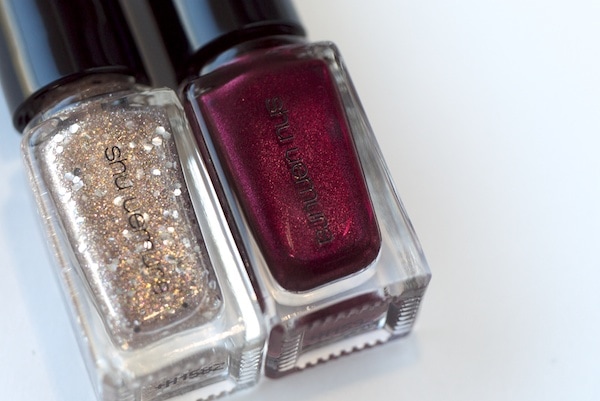 The 5ml mini bottles in this set are Shiny Rouge, a shimmery burgundy red, and a sparkly gold in a clear base with silver shimmer and large hexagonal silver glitter, simply named Gold.

I have to admit, I don’t have the talent for nail art (I’ll leave that to fellow nailer, Xin) and I normally avoid glitter for fear of pain-in-the-you-know-where removal. But even for me, the duo was a breeze to create fool-proof festive nails. 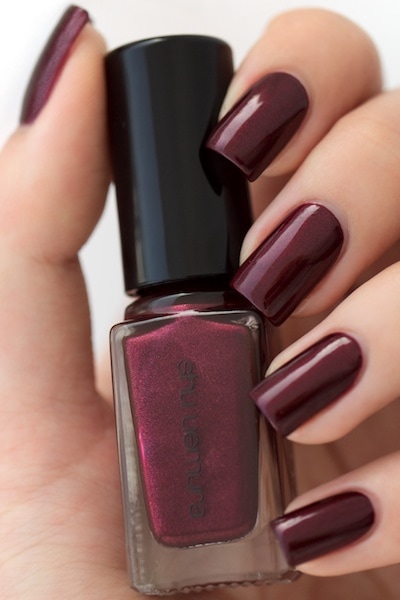 Shiny Rouge is a gorgeous polish, even without its glittery partner-in-crime. The photo above is taken in the shade when the shimmer is at rest. It’s a bordeaux wine red with sophistication, reminiscent of an alluring holiday party or a romantic Christmas eve for two, instead of a Santa red with presents and laughing children, if you know what I mean. 😛 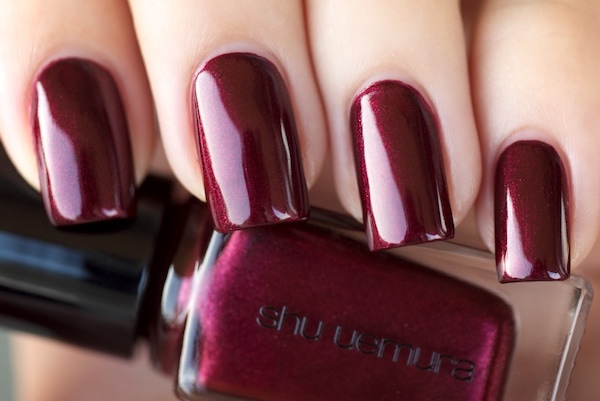 The shimmer peeks through for an incredible glow outdoors and under the light. There’s no teetering about it anymore; it’s such a sexy color, don’t you think? It took just two coats, and I’m not kidding when I say it’s possibly the smoothest polish I’ve ever applied with a brush that’s dense, yet thinly and precisely cut and easy to control. Color me impressed!

Ok, but since they did include a glittery polish, why not spruce it up a bit? Painting the entire nail with glitter only covered up the red underneath, so I tried my hand at some accent designs instead. 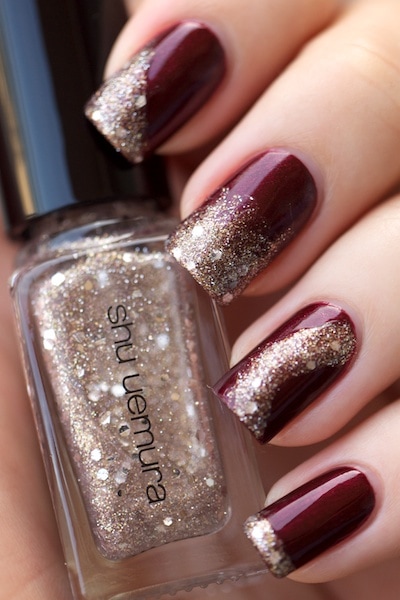 I attempted a triangle, ombre/gradient, random curve (inspired by the nails in this collection’s promotion photos and film), and a classic French. I suggest doing a design on one accent nail and leaving the rest red, but of course I won’t stop you from blinging out all 10 digits! The brush made it easy to draw straight lines, and the clear base makes mistakes less noticeable, hence fool-proof! 😀

My only qualm about the duos is that they’re double the price of one full size 10ml Shu Uemura polish, yet only 5ml each. However, this was my first experience with Shu Uemura polishes and I’m now convinced they’re highly underrated with buttery smooth formula. They don’t release polishes too often, so I hope they’ll keep making more!

What do you think? Have you tried Shu Uemura polishes?

A big thank you to ParisB for allowing me to share my first contributor post in her space! 🙂

Peach_ is a lovely young lady based in Japan, whose blog I discovered one day from a comment she left. I was intrigued enough to hop over to her blog which is all about nails, nails, nails! I’m not into nails but something about her blog, her beautiful pictures and her posts resonated with me. Peach_ will be contributing nail polish reviews and we might even catch a glimpse of something Japanese in her posts! 🙂 Peach_ blogs at alapeach.com

PREVIOUS POST: I’m Curious: How do you feel about regifted gifts? Do you do it?
NEXT POST: Win! 2 pairs of lip glosses from Smashbox Snap You’re Fab lipgloss set