I’d been watching out for the Lancome x Kate Winslet Golden Hat Foundation collection for a while since I first caught wind of it. The face powder with the golden hat looked quite intriguing and I have to admit that Lancome has been coming up with more and more pretty face palettes lately. 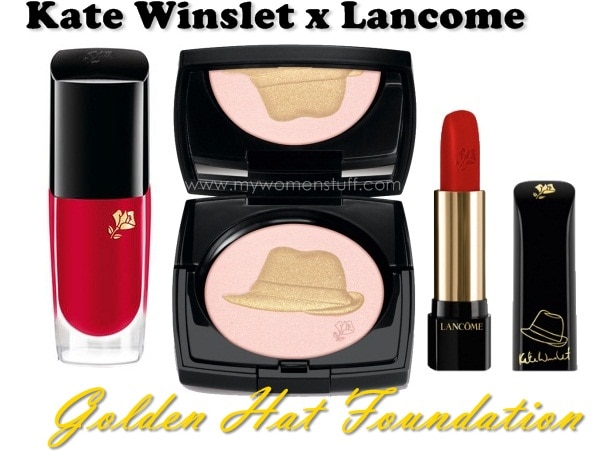 The star of the show, the Golden Hat Illuminating Powder will only be sold as a purchase with purchase. I caught a glimpse of the powder at a counter over the weekend and it does look very nice. It being sold as a PWP however put a bit of spanner in my plans.

I was eyeing Golden Hat initially because I do like Lancome’s powders generally, and I figured I might be light enough to tolerate it as a pale pink blush or highlighter. The Golden Hat powder will retail at RM80 with every RM200 Lancome purchase. Not hard a threshold to hit, but not quite what I had in mind. I’ve consoled myself with another powder anyway for Christmas so I think I’m all set in that area 🙂

The L’Absolu Rouge lipstick will retail on its own at RM80 each and I believe comes in a few shades, but the only colour I’m eyeing is the red Caprice No. 132. Might it be worth a splurge?

There is also a Le Vernis nail colour in the collection but I don’t think we will get that locally. I don’t have a price for it anyway.

So what say you? Will you be picking up anything from this collection? Or will you wait for the next one?