Home » Interesting Discussions » Your Say: Is there a popular brand of cosmetics you cannot use? 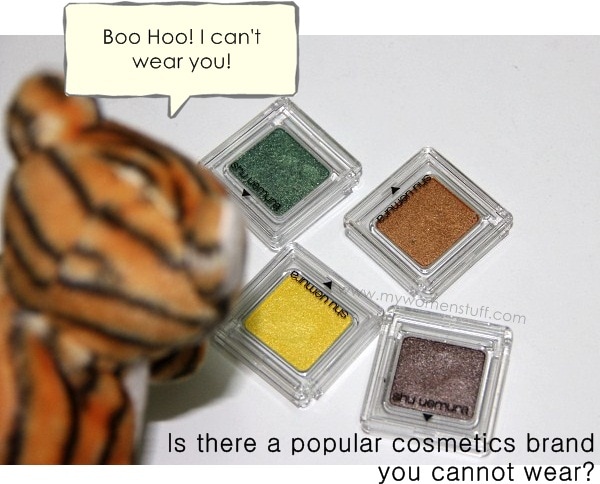 I’ve received a couple of very encouraging emails recently that has really helped to brighten my day – and if you are reading, coz I know you are, thank you! One of the questions I had been fielding related to the new Shu Uemura Atelier eyeshadows.

You might have seen them in the stores and counters. New Shu Uemura eyeshadow formulations that come in handy palettes that you can mix and match to your requirements. I didn’t check them out for the longest time until very recently, and the reason is primarily because, I couldn’t wear Shu Uemura eyeshadows.

It was an expensive mistake to find out, let me tell you that! I used to own so many colours of their original formula (and I kept a few of my favourites) but I realized that the eyeshadows made my eyes feel very uncomfortable.

I did not break out in a rash or anything drastic, thank goodness. My eyelids just felt incredibly heavy and irritated as the day wears on. I don’t even know if anyone understands this feeling.

It was very unfortunate because the texture of the original Shu Uemura eyeshadows are sublime. We have not seen its like since they have been reformulated, twice so far. In fact, I’d go so far as to say that not even the new Atelier eyeshadows can compare to the original formula.

I had a similar problem with Shiseido The Makeup eyeshadows – you know the ones in the oval case? The new Luminizing Color Trios don’t irritate my eyes thankfully, but eye products in sub brands like Majolica Majorca do, including their mascara (the reason you don’t see my trying much by Majolica Majorca here).  Oh and not forgetting the Shu Uemura Cleansing Oils! Iconic as anything but break me out big time 🙁

These aren’t the only makeup brands I can’t use, but its among the popular ones and that used to really bug me until I learnt to let it go – age does have its merits 😛

Your Say: Is there a popular brand of cosmetics you cannot use for whatever reason?

87 comments ... Read or JOIN THE DISCUSSION