Home » Interesting Discussions » Your Say: What do you think of Group Deals and have you had any regrets? Plus some tips when buying group deals 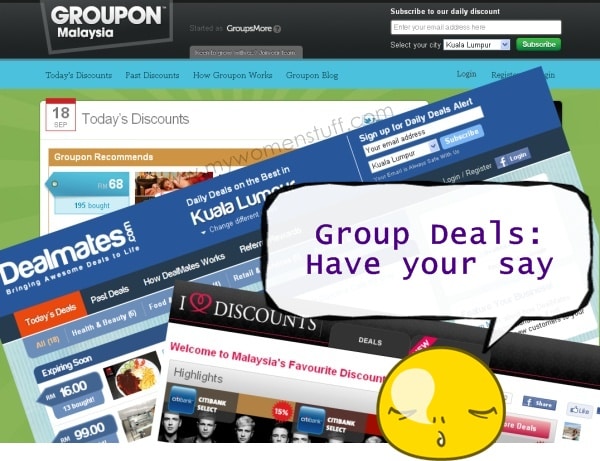 So it would appear that group deals are all the rage now. Every other day, we see a new online company pop up offering group discounts. If you aren’t familiar with it, this is basically how it works.

It is usually advisable for you to make sure the time within which you can use the vouchers is suitable to you or that the location is near enough for you to get to. No point living in KL and buying a voucher to be used in Subang Jaya unless you go there often or are prepared to make the trip specially. I have purchased a few of these group deal vouchers for food and services so let me share some of my experiences with you to see if these group deal thingys are worth trying, and then you can share your story too 🙂

You can read my experience at Jari Spa using this deal. Worth it? Not one bit. Imagine if I had paid full price! Perhaps the ones who did pay full price had a better experience? Its hard to say.

I wrote briefly about my experience with Segway Sentosa. Worth the deal? A little. Maybe S$10 worth for the experience. The shoddy rude service I received made it NOT worth my while. Imagine if I had paid full price! I did receive an apology about 2 weeks after I wrote in with my complaint.

You can read my experience at Absolute Beaute using this deal. It was alright as far as a facial goes. I don’t think it worth RM337, but I’d have paid the full price for the facial only, and might have signed up for a small package, if the location wasn’t so far from where I live.

This one was an excellent deal and a very good introduction to this cafe. Coffee Chemistry Cafe is a very nice place serving very good coffee with pretty coffee art, and decently priced cafe food. I’d happily return for the coffee and food if I’m in the area (Sunway Giza).

I quite enjoyed this deal. The sang har meen was decently good, and I was introduced to a new restaurant I’d never have known about but for the deal.

Based on my experiences, I had a better experience with food deals as opposed to service deals. Some people haven’t, getting poor quality food or smaller portions. Here are my tips you can take on board if you want to purchase a group deal:-

Will I buy group deals again? After these few experiences, I’ll say “I’ll think about it”. I’m not about to close the door and say no because I might still be surprised, or I might actually get a deal I enjoy. But for now, its No. In fact, I’ve unsubscribed from all the group deal websites I’d been subscribed to before. I just think it more hassle than its really worth. Vivawoman discussed this phenomenon recently too from a beauty service angle.

After I drafted this post, I noticed an increase in the number of holiday group deals. I personally have not tried them but I’m very reluctant to unless its for an established hotel. I might buy a hotel deal after I’ve done my homework, but never a tour package/flight deal. I don’t want to be stranded in a foreign land! 😛 Also, if its a deal to buy something from a website, I’m less likely to purchase it unless I’m very familiar with the said website. Even if its a discounted deal, its still money!

Your Say: What do you think of Group Deals and have you had any regrets? Have you bought a deal that was a dud? Or perhaps you bought a gem of a deal? Feel free to share your experiences or advice below 🙂

PREVIOUS POST: Save and Splurge: Powder Blush Duos From Different Ends Of The Price Spectrum
NEXT POST: A Quick Tightline How-To with the Canmake Lasting Creamy Liner pencil