I came back from Seoul with a jar of the very popular snail cream – face cream made with snail mucus. Eww!! I can almost see all of you cringe 😀 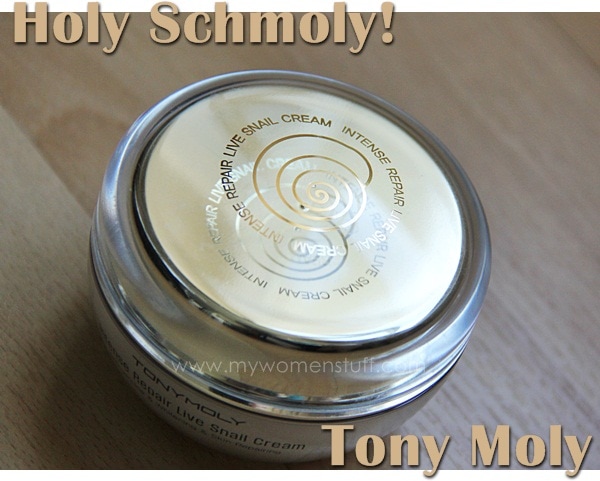 You know what? When I purchased it, I did not feel anything. I mean, I knew snails were involved and I read the brochure but I wasn’t super grossed out or anything. Heck, I’m Chinese. I probably have put stranger things in my mouth 😛 What I was really curious about, was whether it would help skin regenerate and erase lines and pigmentation and brighten the skin as promised.

The brand I purchased was the Tony Moly Intensive Snail Cream. Its not because it was the best nor was it because people love it. It was because I saw boxes of it flying off the shelves, and out of the bulk plastic bags, even before the sales assistants could stock the shelves! So I went over to look and ended up buying a tub that came with an eye cream.

People were buying this by the boxes! When I picked up just one, the cashier looked at me and asked (in Korean) if I was sure I only wanted one box. I understood, because she gestured at the rest of the boxes piled up on the counter. So, I didn’t buy the snail cream from Tony Moly because it was popular or very good or anything. I was just following my herd instinct. You might say it was an impulse purchase 😛

Let’s take a look at this Intense Live Snail Cream then, shall we? 🙂

Snail cream isn’t new, based on my research on the internet. Its been around a while, starting in Chile under different brands but its really taken the Koreans to cause this phenomenon to explode on the skincare scene. Snail cream is like the next biggest thing since Creme de la Mer. Erm… Ok almost 😛

What it is, is a face cream which contains snail mucin. Snail mucin contains an ingredient that helps with the recovery and wrinkle improvement of the skin and also helps with hydration and cell revitalization.

The Tony Moly Intense Repair Live Snail Cream contains snail mucin from raised snails in the area of Geumsan in Chungcheongnam-do and in their brochure, they have taken great pains to tell you that this is a snail secretion filtrate not an extract. Apparently, filtrates are more effective. 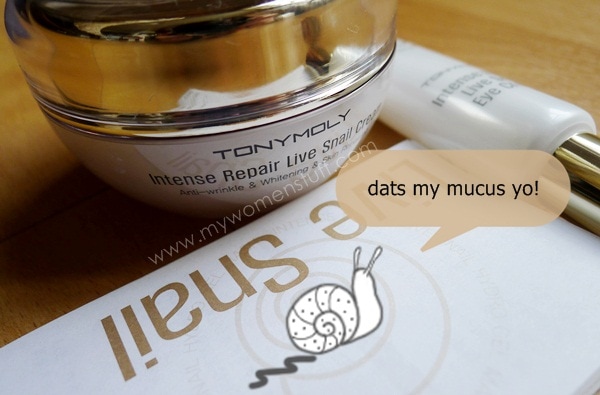 Yes, yes, all very nice, but how does it perform? I’m getting to that 😛

The texture of the Tony Moly Intensive Snail Cream is rather thick. A friend tried this same cream before I did and broke out within 2 days. They weren’t amused. So I was a little hesitant to give it a go. I started using this cream diligently for a while, and then off and on so I think I finally have formed some thoughts on it.

Keeping my friend’s experience in mind, I only use very little of the cream each time. There is a spatula included in the box, and I use quite a minute amount, because I found this cream was quite oily. A thin layer was fine on the skin, but a little thicker and it would feel a bit uncomfortable.

The oiliness is also why I could not use it in the day. It felt heavy on my skin in our hot and humid tropical weather. At night, I sleep in an air-conditioned room, so I could afford to use a thicker oilier cream. And it does feel quite comfortable used in the evenings. As I have combination skin, I apply it on my cheeks and only very very little on my forehead, nose and chin.

One of the things I noticed almost immediately within a week of using this snail cream, is that my skin felt markedly smoother around the cheeks, where my skin is driest. My skin also looked and felt soft and fine. It was quite impressive. I did however break out a little on my chin where my skin seems to be oiliest. So now, I apply this cream on my cheeks and use only the hint of the remnants on my chin area.

However, I did not experience any lightening of pigmentation or brightening of the skin just from using this cream. Even after a month and then using it off and on, I only really experienced softer, finer skin texture. Fortunately for me, unlike my friend, I experienced break outs only on my chin and when I cut back the use, no more breakouts.

As I have noted however, due to the oily texture of the cream, I only use very little, and only primary on my cheek area. So, was it worth it then?

Yes, it fulfilled my curiousity. I’d never come across the use of snail slime in cream and now that I’ve tried it, I can say that its not all bad. It did not break my skin out, and the skin on my cheeks look dewy and lovely, but it isn’t a miracle cream as people claim it to be.

No, it did nothing to brighten the skin or lighten spots. My skin felt finer and smoother but that was it.

An interesting face cream containing snail mucin that is supposed to help regenerate skin, lighten and brighten skin and be moisturizing. I experienced minor breakouts around the oilier parts of my face but my cheeks which are the driest part benefited the most from this cream. The skin looks and feels more dewy and smooth and soft. The cream is rather oily so it is best suited for those with drier skin or for night use in hot humid weather.

Cons: Oily and can break people out, Did not brighten skin nor lighten spots

I do not know if there are snail creams from other brands available here in Malaysia at this time. I never paid much attention because whilst I have tried this and am still using it now and again, I cannot see myself repurchasing. It just doesn’t have  a wow factor for me.

I hear there’s a cream out there made with nightingale droppings which I don’t think I’ll be giving a go any time soon. Feel free to go “Eww!” now 🙂

Tony Moly Intense Repair Snail Cream and eye cream box set was purchased in Seoul for 36,000 Won (about US$36) and is available at all Tony Moly stores or at the Lotte Duty Free department store.

PREVIOUS POST: Using the Bare Minimum to go Au Naturel with the Sleek Makeup Nude Collection
NEXT POST: I love body oils : The case for body oils and why I love them