Home » Skincare » Serum » Fortify and Soothe and Hydrate… and all that : Take it away Vichy Aqualia Thermal!

I’d been wanting to tell you about this hydrating serum for a while now, but it kept getting shelved for one reason or another or was pushed aside for one obligation or another but no longer! I’m usually very picky about pharmacy brand serums – very few ever make the cut for me. But this one does. 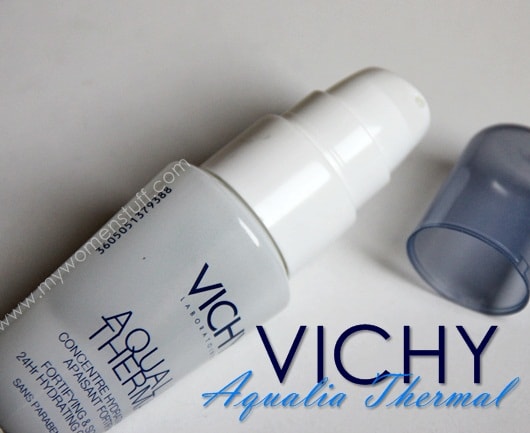 Its the Vichy Aqualia Thermal hydrating serum or to give it its full name Vichy Aqualia Thermal Fortifying & Soothing Serum 24hr Hydrating Concentrate *whew* I’d had it for a while stuck in a corner, but I took to it when I noticed that I was running out of my Estee Lauder Hydratrionist serum really fast and I needed a backup.

What it is, is a hydrating serum so it goes on after cleansing and toner (if you use it) and before moisturizer. I use it in the day and sometimes at night too. And its earned itself a semi-permanent place on my dresser. Nothing’s permanent you see, since I’m fickle so semi-permanent is about as good as it gets!

The serum comes in a glass bottle and the texture is rather viscous and an opaque texture. Its not sticky though. One pump is enough for me and it sinks into my skin very quickly, leaving it feeling plumped up quite nicely. It contains silicone but I don’t get a silicone feel to it. 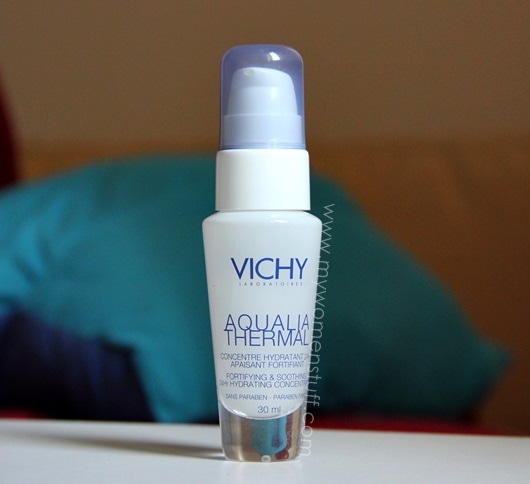 I do have a gripe with the bottle being a little too opaque for my liking. I would prefer if it was transparent so I can see how much is left. Or rather, when I should replenish because I like to take advantage of sales y’know. As I’ve noted, its not sticky, it keeps my skin feeling hydrated all day under my regular moisturizer, and its good stuff.

I will have to emphasize one point – this product is not a moisturizer by itself. If you apply it and feel its sufficient for you, then good. But its not meant to be used alone. It should be used together with a moisturizer. I have been using this with a hydrating moisturizer like the Kiehl’s Ultra Facial Oil Free gel cream in the day and these two make a potent combination. Foundation slips on like a silk coverlet on the skin. Lovely! Its a little pricey for something from the pharmacy though but it sometimes goes on sale or comes in a value price set so its worth looking out for it then.

A hydrating serum that helps boost hydration and moisture levels in the skin. To be used together with moisturiser, not in place of moisturiser. It absorbs quickly into the skin without leaving it feeling sticky. A pump is quite sufficient for most people and a bottle can last quite a while.

Pros: Good sturdy packaging, Serum is light and absorbs quickly into the skin, Helps my skin feel and stay hydrated all day

I was going to call this a budget alternative to the Estee Lauder Hydrationist Moisture Barrier Fortifier which functions on the same principle. However, at RM130/30ml vs RM210/50ml I realized that there was hardly any difference in price. The difference is only when you get this one on sale or in a value pack.

So, are they alternatives? For me yes. I am happy to use and suggest either product. If you don’t want to fork out a lot of money for the Estee Lauder one, this Vichy Aqualia Thermal serum does the job just as well. Granted, 30ml doesn’t seem like much, but used day and night, I think you should be able to keep it going for at least 2 to 2.5 months. If you use it just in the day as I do, then you can expect it to last up to 4. For a smaller capital outlay I think its fair 🙂

Have you used this product before? I just looked at the ingredient list and I realize that based on previous reader interactions in the comment box, things like alcohol denat, dimethicone and sodium hyaluronate send up red flags for quite a few of you, so TAKE NOTE! 😀 It does however not bother my skin and since it does what it says its meant to do, I’m happy to stay with it… semi-permanently of course 😉

PREVIOUS POST: Red or white? Hada Labo Lifting + Firming Lotion or Super Hyaluronic Acid Lotion?
NEXT POST: Its time for your close up with the Smashbox Softbox Eyeshadow Palette