I’d not been paying much attention to FitFlop for  a while. I have a couple of pairs by now, and I do still swear by them. I wear almost no other slippers or casual shoes/sandals anymore these days. But when you already own a pair or two, its better to just turn away when confronted with new designs lest the wallet bleeds. 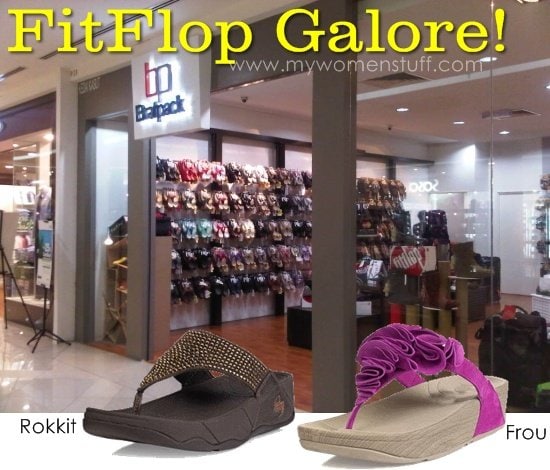 But when I was strolling around Hartamas Shopping Centre and chanced upon a store called Bratpack that had a veritable WALL of Fitflop sandals/flip flops, I just had to stop and look. They don’t only have the flip flops for men and women, they also have shoes and boots!

I was quite surprised to see the variety of FitFlops carried there. They had the regular seviceable looking ones and they also had some nice new ones that I liked. Rokkit was one of them. The top is studded with sparkly bits and looks terribly bling on your feet. But I loved how they looked. I might go back and get a pair some day. Its so BLING! 😀

Frou actually does look nice in pictures, but not so nice on my feet. For some reason, I felt that it was cut a bit big, so it did not grip my feet very nicely. I’ve realized that, with FitFlops. The base is quite standard in size (UK3 for me) but the top part can sometimes feel too loose in different designs. So, I do have to try them on in person to know if they’d fit.

Prices have most certainly dropped. The Pietra which used to retail for about RM318 is now about RM269 or perhaps a little less. The new or bling designs are pricier, but the regular designs are definitely more afforable (by Fitflop standards). The old designs are going for a mere RM129 which sorely tempted me to get a pair just as a backup. Oh and those boots are interesting too. Way too large and lumberjack looking on my feet, but interesting nonetheless. I would be even more interested if they had the furry winter boots in stock hehe…

I’m not sure if I’d buy my Fitflops here at Bratpack, because I would try to get them at Isetan first (department store card member) but I do think its a good place to view all available designs at a go. There were also some other brands of shoes there, but I didn’t pay too much attention.

Oh I do notice after wearing my first pair of Walkstar for a couple of years, the base seems to have lost its support. Its less comfortable and softer now than it was when I first bought it, or compared to my Pietra which is newer. It is still infinitely more comfortable than a regular flat flip flop so I’ll keep wearing it anyway. But I think its time for another 😛

Have you fallen for the FitFlop hype yet? 😉

This Bratpack store was spotted at Hartamas Shopping Centre, Plaza Damas. Its on the upper floors and I irritated the staff by trying on multiple pairs of shoes, flip flops and boots but not buying any 😛

PREVIOUS POST: You Asked: My Skincare Routine Day and Night
NEXT POST: Dior dons their Blue-Tie for Fall 2011 with a Smoking Blue palette (and a bunch of other stuff too)