Ladies, let me not waste your time. If you love bright, strong, pigmented eyeshadow colours, you would best look away now. This isn’t something you will like. However, if you are like me and you like your Asian makeup and sheer but buildable eyeshadows with a touch of shimmer, you might be like me and like the Laneige Fresh Modernist Eyeshadow palette :) 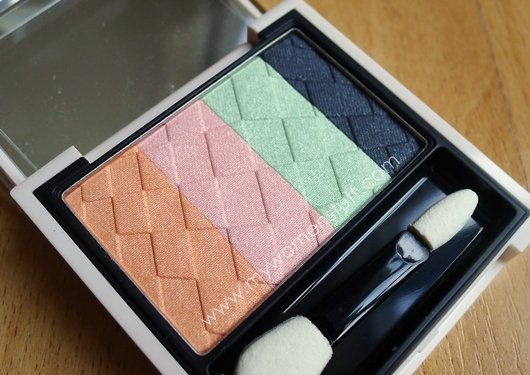 This eyeshadow palette is Laneige’s offering for Spring 2011. When I first saw it, I had a more of a “meh” reaction to it. I honestly was not sure if I wanted to bother at all. It looked so pastel and let me say it – boring.

However, in the spirit of inquiry, I swatched it. And that’s where I was pleasantly surprised and I learnt once again that you should never judge an eyeshadow by its pan … to paraphrase a popular quote :)

Here’s the palette swatched with and without flash for you to get an idea of its colours. All colours swatched once except for the black. I’ll tell you more about that below. 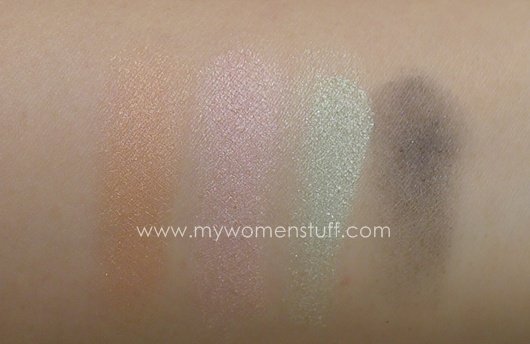 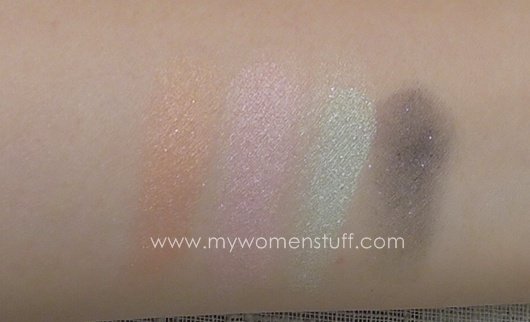 I wanted to show you the swatches with and without flash because you can see that the shimmer does show up without flash and with flash, its not super shiny. Its actually very subtle and the texture is soft but not too powdery. All the light colours are swatched just once – so its not that its not pigmented, it is. But colours are light and the texture too is light so it does not appeal to some.

Now about that black. Of all the colours in the palette, I was the most interested in that black. I’m happy they included it, because the palette needed a darker shade to balance it out. However, as you can see, it does not swatch as smoothly as the other colours. It is in fact very very sheer and that was a disappointment. The photos show it swatched at least twice.

However, I learnt that when I use a brush, the black does apply colour much better. I use the black as a base and then layer the other colours on top for intensity. My favourite combination is the green over black with the light pink for highlight. 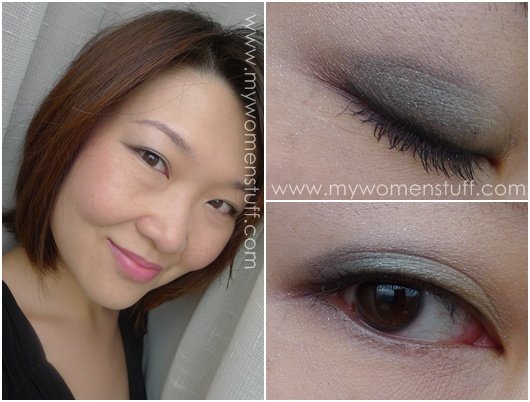 I found that the eyeshadow stayed on my lids all day without a base (but note that most do – I don’t have oily lids) and by evening, it still looked pretty much as it looked in the photo above which was taken in the morning. I was suitably impressed. And strangely enough, the corresponding Modernist Pink lipstick I showed you before goes very prettily with this eyeshadow palette! I guess there was a reason they were released as part of the same collection. :P

Cons: Black was a disappointment, Too sheer or shimmery for some

I do like this one as you can probably tell. Its the first time I’m trying an eyeshadow palette from Laneige and I must say that I am quite liking it. Then again, I do also like my Asian eyeshadows which are markedly different from Western eyeshadows in texture and colours.

I’ve worn the peach-black combination as well, which is much more subtle if you can believe that. The peach colour isn’t very stark and it brightens up the eye area very nicely so it helps you look awake when you just want to crawl back into bed :) I also reckon that the peach and pink could even work as a blush in a pinch!

Have you tried any Laneige eyeshadow? Is there any in particular you’d recommend? As I said above, I realize this sort of colour or texture is not for everyone but if you like using Asian style shadows, I think you might like this one too :)

PREVIOUS POST: Day 2 of 30 : Rouge Dior Haute Colour No. 880 Devilish Pink
NEXT POST: Snail Cream : Would you put it on your face?