We had a long weekend here in Malaysia last week thanks to Labour Day, so I took advantage of it by going to Seoul :D It was just a quick trip and it was really quite tiring because I walked so much, but it was fun. 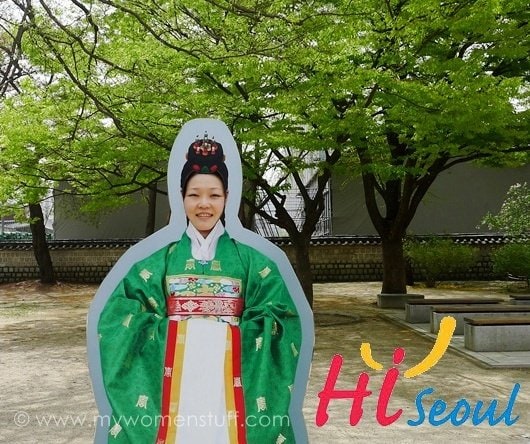 Don’t I look quite quite Korean here? :P I didn’t pay to wear the Hanbok – its too expensive. But in the grounds of the Gyeongbokgung Palace were these cut-outs that you can stick your face into so yeah. Inexpensive way to see how you’d look wearing the Hanbok! :D 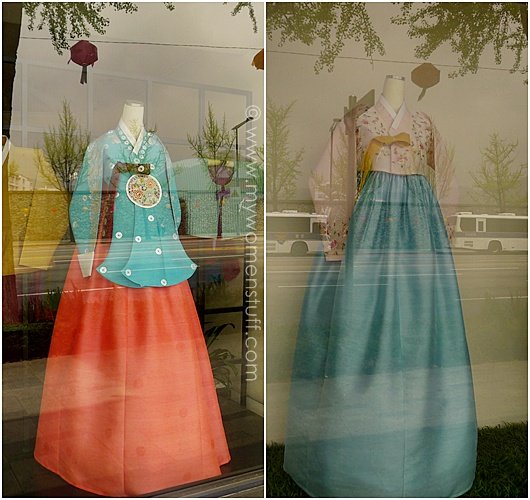 Traditional Hanbok in a store window at Insadong

Here are some beautiful Hanbok (Korean traditional dress) that I saw in a window on my way to Insadong. Aren’t they beautiful? I was told that in Korea, its now strictly kept for formal functions like weddings, and many people may not own one because its very expensive. So people sometimes rent them if they need a Hanbok.

I’ve got some more photos below if you are interested. Its quite a picture heavy post so do be warned!

Whilst visiting Deoksugung (Deoksu Palace) which was just opposite the hotel I stayed in, I managed to catch the Changing of the Royal Guard which was a very colourful and interesting event carried out in the square in front of the main gate of the palace. I was there at about 3.30pm and they have this about 3 times a day (roughly). All palaces are closed on Monday so do be warned if you are planning to go. 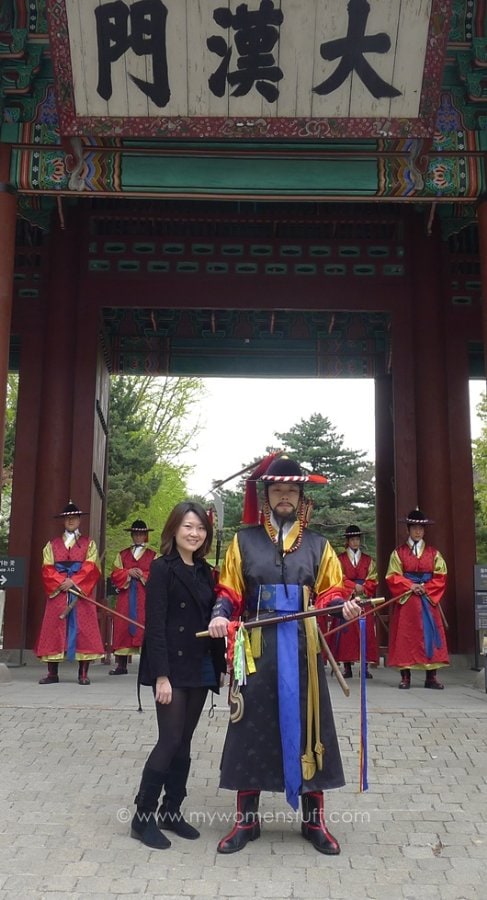 And after the show and pagentry, you get to take pictures with the guards! There were 3 of them, but I chose this one because he was the most “leng chai” (good looking) of the lot and he was sweet to pose for a few shots and bid me “Annyeong Haseyo” LOL! :D

I must say that my favourite parts of Seoul are the palaces because I absolutely loved all the gardens I walked through. It was Spring although there was still a chill in the air, and flowers were in bloom and trees were green and it was just so calm, relaxing and beautiful. 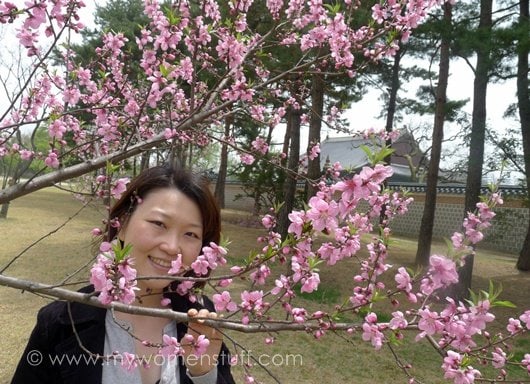 Cherry blossoms were still in bloom although many had already fallen off for the green leaves to appear but I managed to catch some good shots in the Gyeongbokgung palace. This is the main palace and is about 20 minutes walk from Deoksugung which was fine by me :D 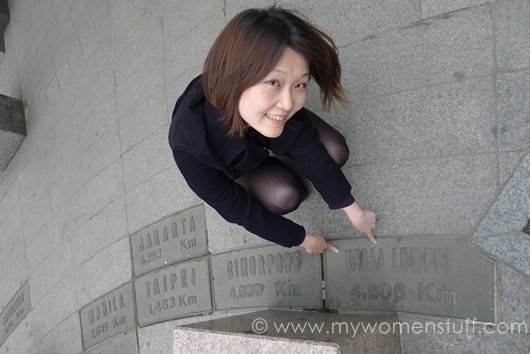 Along the way I passed the Zero Mile stone, a point from which the distances are measured and tada! There’s Kuala Lumpur at 4,600km away from the middle of Seoul city! :D 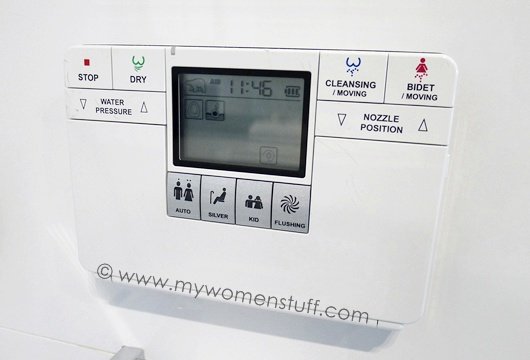 Here’s something I just had to show you – the toilet controls in my hotel bathroom. I stayed at the Plaza Hotel and I will be telling you about it separately because its really nice! But just look at the array of controls you can use to operate the toilet! It has a warm seat (ahhh!) and auto-flush and you really have to play around with the controls to fully enjoy it LOL! 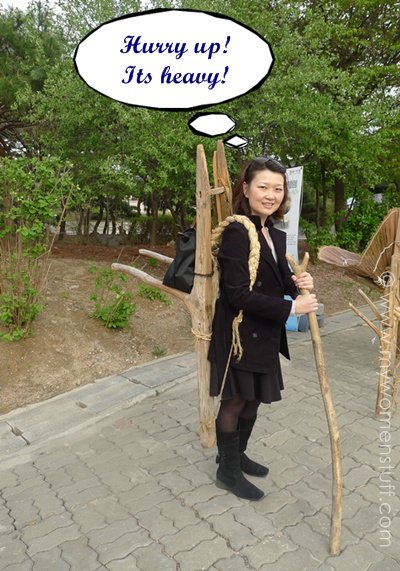 This is a traditional carrier I tried on at Namsangol Hanok Village, which is a traditional Korean village in Seoul city where the buildings had been preserved and/or reconstructed to ancient times. Namsangol Hanok Village is open to the public and its free which is really awesome. These traditional carriers were used to carrying things and its really heavy. Incidentally, I spotted these still in use in the Namdaemun market where I saw some traders carrying their stock on their backs using one of these!

And really, what is travel if not to sample the local food! 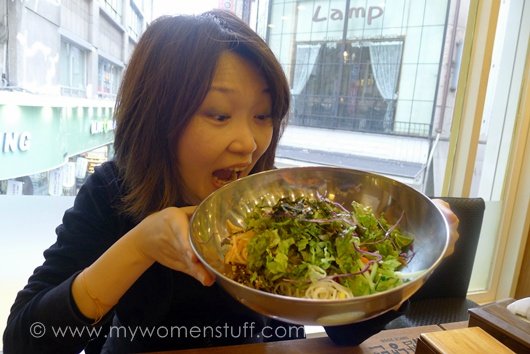 My first meal in Seoul was Bibimbap (mixed rice) with barbequeued meat at Myeongdong, served in a large metal bowl. It was delicious although I have to say that it did taste pretty much as Bibimbap tastes at Korean restaurants here in KL. The meal was 5,000 won (about US$5) which was one of the cheapest I had. Food is pricey in Korea.

I was very lucky to have a friend in Seoul who with his family took us around by car, showed us the sights, fed us very well and even invited us back to their home and served us lunch! Because of that, I had the chance to go to the Noryangjin Fisheries Wholesale Market which I thoroughly enjoyed! I love visiting markets :D 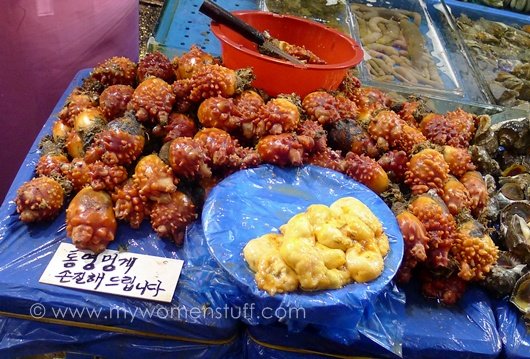 Here’s a very strange shellfish that I cannot remember its name. If you can read Korean or if you know what that is, please let me know :) You peel off the outer skin and eat the inside which you see on the plate. My hosts bought a bag of it, and it was eaten raw with homemade kochujang sauce. I wouldn’t say it was delicious but it wasn’t awful and it was interesting. (Update: Thank you Andrea! Its meongge or sea pineapple or sea squirts) 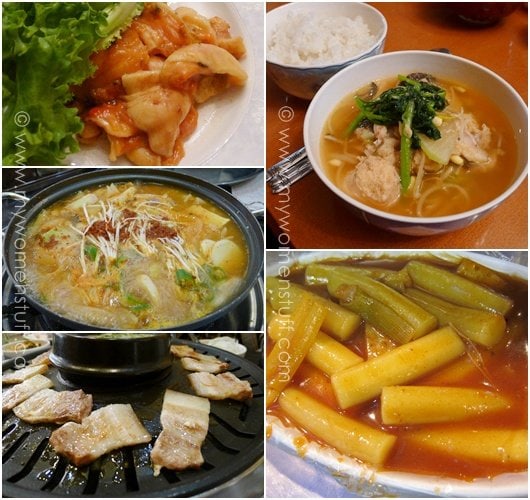 Here is a selection of food I had. From the top left clockwise here’s what they are: 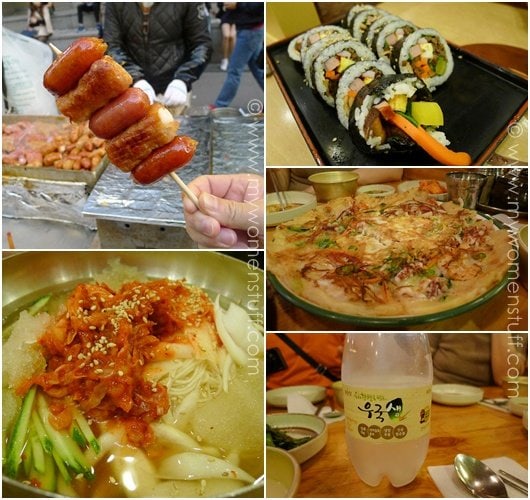 I went to the usual shopping spots – Dongdaemun market which is open 24 hours and is a clothes mecca; Namdaemun market which sells clothes and jewellery wholesale, Myeongdong which is a shopping area and where you can get every single cosmetic brand in the Korean market (but I’ll tell you about it in another post), Insadong where there were old buildings in the alleys between the newer buildings and cafes. I even went to the Bukchon Hanok Village which is really far away and where people still live in the traditional Korean houses which are preserved to look just like they did in days of yore. That was however due to a mistake on our part and I wouldn’t recommend you go there unless you have a lot of time on your hands.

I had a lovely time in Seoul and my hosts spoilt us silly. The weather was lovely barring the one day where it rained non stop the whole day, and I ate far too much (diet starts now!). Shopping was alright. I had lists of stuff to get for friends from cosmetics stores there but I personally did not end up with very much. Mostly some BB Creams, sheet masks and skincare, including the Tony Moly snail cream I showed you yesterday.

Another city crossed off my to-visit list and a lovely time had :D

58 comments ... Read or JOIN THE DISCUSSION