That song by Madonna has to be the most perfect song for modelling and all models. And its most apt because news came in through my inbox about the kick off of the annual Estee Lauder Model Search contest this April!

It’ll kick off on April 25, 2011 at MidValley Megamall and thereafter at 8 locations around the country culminating in the Finals on 12 July 2011 at KLCC. The theme this year is to find the IT girl that embodies the “Pure Color” spirit – fun, glamourous and modern. Oh and the winners will win prizes worth RM51,000 including a 8D/6N trip to Korea! Find out more at their official website or the Facebook page. Will I see you at MidValley Megamall on April 25 for the kick off? Or maybe one of you will be the next EL Model? ;)

The reason I’m telling you this, is beacuse I actually underwent a bit of a photoshoot experience this last week and I have nothing but new-found respect for models! I’m about as good as posing for photos as a piece of wood – at least a piece of wood can just stay still – so its certainly humbling.

Have you ever aspired to be a model?

I never did – I didn’t have illusions ;) What I wanted to be quite badly was an astronaut… that plan failed the day I had to wear spectacles and I realized I wasn’t great at math. Imagine if I miscalculated the amount of oxygen I’d need in space! 8O

Have you been for or participated in a photoshoot?

Not quite a photoshoot, but the first time I had my picture professionally taken (somewhat) was at an Estee Lauder makeover a few years ago, where I had a makeup and hair makeover and a photo taken. I’m not quite sure where that photo is now. I had a studio shot done last week which was nerve-racking! I don’t really like having my photo taken.

Your happiest moment of the week?

Mine was when I restarted my yoga classes after a 6 month hiatus. I needed that stretching!

Did you try something new this week? 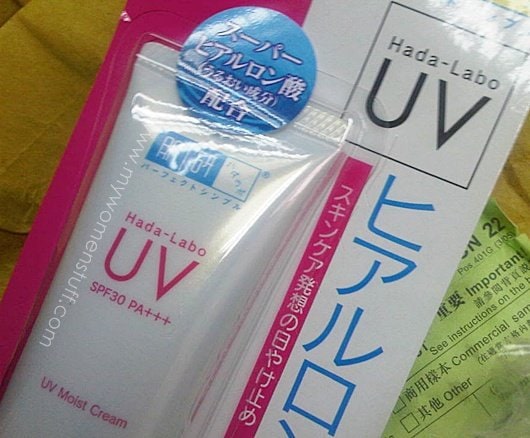 I haven’t tried it, but I received some packages this week and one of it was this tube of Hada Labo UV Moist cream that I’d purchased online – don’t think its out here yet for a while. Will be taking it for a spin and will let you know the outcome.

I don’t know if anyone remembers the 30 Lipsticks in 30 Days post I did about 2 years ago? I had a ton of fun with it. I could actually do that again but as my first love is blush or as some will call it “blusher”, or even the more sexy sounding “rouge”, I thought of doing a similar post, but with some of my favourite blushes :D That said, if anyone prefers lipstick, I could do that too :) So take a vote and lets see which month has the shortest days LOL! :D

Enjoy the weekend everyone! :D