Home » Skincare » Cleanser » Question: What other uses do you have for cleansing oils?

So I’ve been staring at these 2 bottles of cleansing oils I bought from Shanghai. They are the Watson’s Cleansing Oil and they were on offer for something like 2 for RMB45. 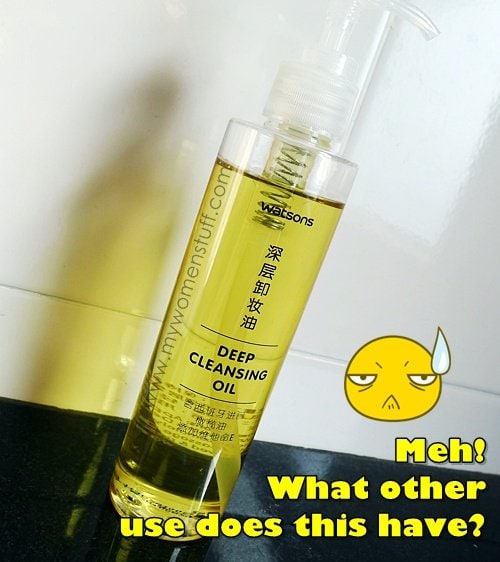 I tried one a couple of times and found I did not like it. It is supposed to made from olive oil, and it feels very thick. It goes on the skin and sticks to it, pretty much like how oil sticks to things – you know like in the kitchen? It takes a long time to wash off and even then, does not feel clean. My skin feels sticky and oily after that, and I have to triple cleanse – yes, wash twice with cleansing foam!

It actually reminds me a lot of another popular “Deep Cleansing Oil” both in texture, make up and form. Which?

It reminds me a lot of the DHC Deep Cleansing Oil, which I tried many years ago and binned within a week because it clogged my pores and broke me out so bad it was not funny. It even has that same dark yellow colour and both are supposed to contain olive oil extracts.

I should have borne that in mind, because this Watson’s Cleansing Oil did the same. Clog my pores and break me out. Bad.

That said, who knows. If the DHC Deep Cleansing Oil works for you, you could even find that this one’s a much cheaper dupe! Not that I’m saying it is.

Anyway, its now sitting in my bathroom mocking me for being greedy and foolish and too much of a mad scientist. I’m not sure what else we can use cleansing oils for.

Any one have ideas? 🙂 Else these 2 will go into the bin. Bleh.

PREVIOUS POST: Guess which new BB Cream is in town?
NEXT POST: Yet another Pantene Hair Fall hair care review… with a little extra at the end