After my initial foray into Baviphat, it would appear that I’m not quite enamoured with the 2 things I’ve tried – Juicy Mask and the Apple Jelly Lip Scrub. The last item I purchased from Baviphat was the Two Times BB Cleansing Oil. Might it fare better than the other things I tried? 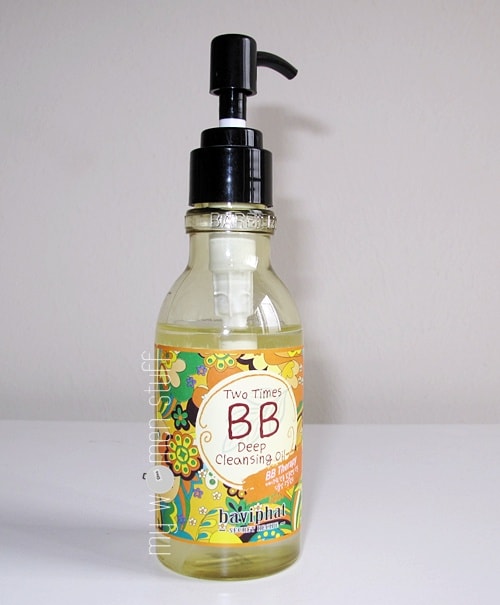 The bottle is cute – it reminds me of a bottle of olive oil for some reason. You might want to hold that thought because we’ll be coming back to it ;)

It looks small but holds 150ml of liquid so that isn’t that bad. Also, the cleansing oil is very liquid. If you are used to the texture of cleansing oils like Shu Uemura, you will be surprised to find that this one pumps out like water so don’t use too much. 2 pumps about does it for my whole face.

It cleans my skin a treat and removes makeup well. It also doesn’t dry out my skin but I did feel like it took a lot longer to emulsify and wash off than other oils I’m used to. I spent a long time in the shower going over and over but it still felt like there was a thin film of oil on my skin – nothing a bit of double cleansing can’t solve of course.

Is that why they call it “Two Times BB Cleansing Oil”? Because you have to wash your face twice? :P

However, what I found hard to get used to is the smell. Remember I said the bottle looked like a bottle of oil? The smell reminds me of petrol. If you are familiar with the smell of petrol fumes that you get when you go to a petrol station (here in Malaysia anyway) you will know what I mean. The smell of this cleansing oil sent me straight to the petrol station!

Price wise, RM39.90 for 150ml of cleansing oil isn’t bad really. It’ll last you quite a while – looks can be deceptive. But only get it after you have taken a big whiff of it at the counter – I should have :P

Pros: Affordable, Cleans off makeup easily, Does not dry out my skin

Cons: Smell takes getting used to, Took a while to clean off properly, Double cleansing is recommended

Might you have tried this one? I’ve not been taken with anything I’ve tried from Baviphat so far and although I know that the BB creams seem to get high marks from online reviews, I’m not into BB creams so I probably wouldn’t try it.

Have you found anything noteworthy from Baviphat Cosmetics?

PREVIOUS POST: Travel Query: Do you dress for comfort or style when you travel?
NEXT POST: Save and Splurge : Silkygirl Lipgloss and Dior Addict Ultragloss