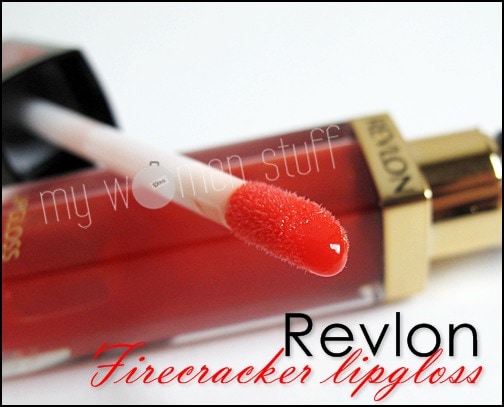 When Revlon first launched their Super Lustrous lipgloss quite a few years ago, I was raving over them. In the low end of the lipgloss price scale, I still rank Revlon Superlustrous Lipglosses as the best there is for the price you pay.

Overseas, there have been quite a few limited edition or new colours released but locally, we haven’t been so lucky. However, in the newest Daydreamer summer collection for 2010, Revlon has also added 3 new Super Lustrous lipglosses to the permanent range and one of it is Firecracker.

Look at it in the tube. Isn’t is the scariest brightest red you have ever seen? Well, you might be pleased to know that it does not swatch anywhere near that shade at all. Or you might not be so pleased, depending on what you prefer :)

Firecracker strangely enough swatches rather orange. I would have called this colour Tomato actually, because the colour reminds me of fresh tomato juice. Its got an orange tint that is rather warm, so that might be why they did not make it too pigmented. 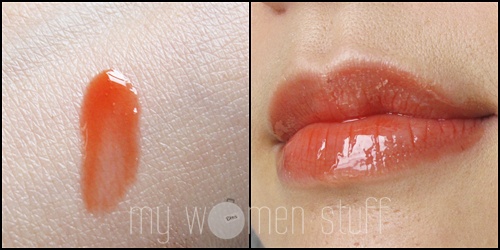 There, doesn’t the swatch on the back of my hand remind you of a drop of tomato juice? On lips, its the same. A sheer orange based red that might not flatter everyone, especially not those who have very strong yellow skintones. However, if you have a neutral or warm complexion, I think it’ll look lovely!

While trying out this lipgloss, I found that I had to wear blush that was warmer in tone e.g. peach or coral. Cool pinks or plums, while pretty clashed horrendously with the lipgloss. So that will be something to bear in mind.

The texture is like that of other Super Lustrous lipglosses – thick, not too sticky and has a slight plasticky scent. I also get a bit of a tingly feel on my lips when I use this lipgloss. Not quite sure why. Do you get it too?

Pros: Nice colour but might not suit all skin tones

Cons: Color does not apply as it looks in the tube (could be a pro actually), Funny tingly feel on my lips

If you have been wanting to try a red lip, you could ease yourself into it by using a sheer red lipgloss like Firecracker (remember red lips for Fall 2010!). Granted, its more orange than red, but its a lovely bright colour nonetheless. Because its sheer, you can just use a thin layer for a hint of colour. In my picture above, that’s 2 coats.

Interestingly, orange tones aside, this lipgloss featured in all 3 of my looks using the Revlon Summer Suedes eyeshadow palette and it goes well with a warmed over look. So consider this one, when you’re wearing warmer tones on your skin :)

How are you for Revlon’s Super Lustrous lipglosses? Have you checked out the new colours? :) My old faves were Cherries and the Glow and Glossy Rose (I think that’s what it was called – its been a while) I’ve been seeing a lot of love for Coral Reef so I’ll have to check that out soon :D