Its Fri-i-day! So lets get In The Groove and shake that booty! 😀

My first MAC Mineralized Skin Finish was Porcelain Pink and I liked it very much so I picked up Petticoat from the new In The Groove collection. This is the 3rd incarnation of Petticoat if I recall correctly. Its my first time getting it (last time I only tested it at the counter and passed – not sure why this time was different 😛 ) 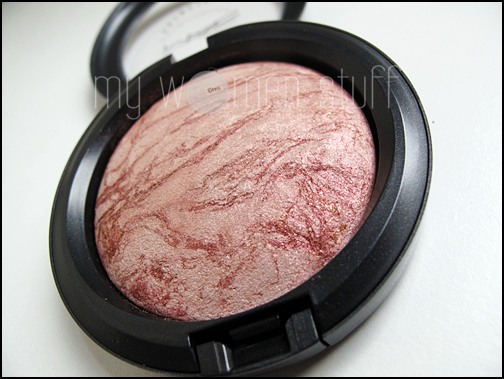 Unlike Porcelain Pink MSF, I found the Petticoat MSF very shimmery. It almost reminded me of Bobbi Brown Shimmerbricks. Its that sort of high shimmer that might tend towards being frosty and that you can easily overdo and end up looking like a disco ball. “Disco” – does anyone use that word anymore? Its so…. 70s but then so is “In the Groove” 😛

Petticoat looks rather mild and deceptive in the pan. It looks gorgeous, rather like Jupiter (the planet) and depending on the stock you get, you will get more or less gold veins and more or less rose colour in your MSF. I was happy with mine – I did not want too much gold veining because that would translate to more shimmer I did not need.  I did not want too much rose too in case it was too dark. You can compare mine above with that of Watercoloursky and you will see each piece is quite different. 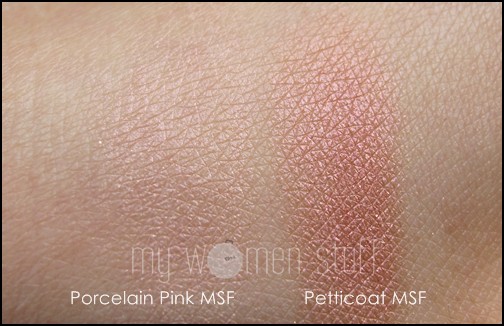 Why I say its rather deceptive is because Petticoat swatches a much darker deeper rose red than it looks and that took me aback. How on earth could I wear a colour like that?!

With a light hand, that’s how. Here’s how I use mine. 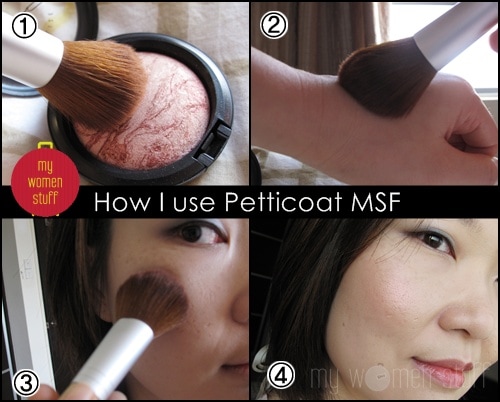 Remember, when working with intense colours, its always easier to start sheer and build up, rather than whack on strong colour then try to sheer out. I find that my method of application for me, results in a less shimmery look too because you build up the shimmer. Its more subtle and less disco ball and gives me a nice pinky-rose blush colour.

You can use a skunk brush or duo fibre brush which offers lighter application and makes pigmented blushes easier to work with. I use my regular Ecotools blush brush that I use for all my blushes – I guess I’ve just gotten used to using it with a lighter or heavier hand depending on the texture and blush colour I’m using.

Some readers have mentioned that the shimmer from the MSF tends to make their pores look bigger. Unfortunately that is quite true. It does not quite accentuate my pores, but it can settle into pores and make them look more prominent. This is more apparent in Petticoat compared to other shimmer blushes or highlighters I own so I think its the formula.

The MSF can be used for various uses – all over highlighter, eyeshadow, blush but due to its pigmented tone, I’d say Petticoat is purely a blush (or maybe eyeshadow) only. Its a pretty blush and I’d use it often. But its not a must have because there are many more blushes that look similar and are easier to work with 🙂

Petticoat MSF is limited edition and by this time, I’m informed that Petticoat MSF is almost sold out at our MAC stores and counters but do check just in case I’m mistaken. You might be able to find it being sold online though – some people might buy into the hype and then realize it doesn’t work for them, or they could be greedy and buy backups and then sell them.

Whatever you do, do not pay top dollar or a premium for this. It retailed at RM115 or US$28 and you shouldn’t pay more than that. In the alternative, be patient – MAC might just re-release Petticoat in a future collection – just as they have done with this 🙂

Do you own Petticoat? Do you have any tips for application for those who might find it hard to work with?