I’m down in Singapore at the moment and my eye was caught by 2 new things spotted at the Guardian pharmacy yesterday. 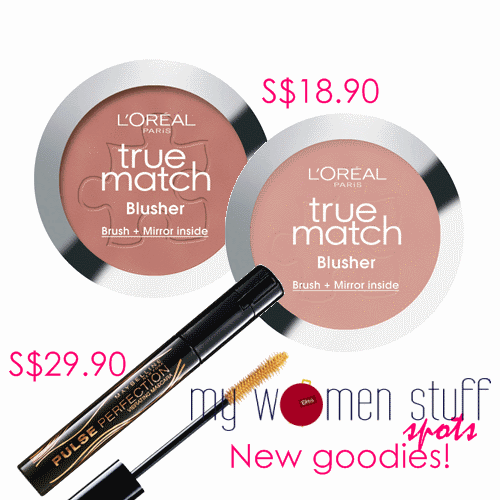 The first is the Maybelline Pulse Perfection Vibrating Mascara. You might recall that this mascara was launched about a year ago in the USA when I noted with horror how quickly it was coming on the heels of the then newly launched Lancome Oscillation mascara. Well its now available in Singapore at a price of S$29.90 and is marked “Limited Edition”. I played with it a bit in the store. It behaves prety much like the Lancome Oscllation mascara to be perfectly honest. I don’t know how the mascara formula performs on the lashes, but the mechanism is the same. The vibration is controlled by a switch at the top of the cover – depress it and it vibrates, release and it stops. Affords better control this way. I’ll let you know when this gets to Malaysia but I’m afraid I’m not up to shelling out S$29.90 just to try a gimmicky gadget for now when there’s other shopping to be had 🙂 The other new thing is one dear to me ol’ heart – new blushes by L’Oreal! My old fave is the L’Oreal Blush Delice. Since those, I don’t think L’Oreal has come up with anything new in the blush department. But I spotted a new True Match blush that promises to have a color to suit every skin tone. True Match remember?

The blush comes in a rather flimsy plastic packaging but I like the jigsaw image imprinted on it. It’s kinda quirky like that. I swiped it too with my fingers and I found that it feels silky smooth and swipes quite pigmented.

There were 6 colours I believe, running the gamut from pinks to rose. Quite pretty and retail at S$18.90. I’ll wait till it gets to Malaysia before trying this one.

I did end up getting my fave La Roche Porsay Anthelios XL fluid cream sunscreen at 20% off! 20% off S$41/100ml is nothing to sneeze at 🙂 And so the shopping begins 😀 If you have tried either new product, and want to share your thoughts, please feel free to! 🙂

Note: Maybelline Pulse vibrating mascara is not coming into Malaysia. The True Match blushes are at L’Oreal counters now