Yesterday, I asked if you knew what this thing was.

Two of you hit the nail right on the head and some of you were in the ballpark. The rest were so far off the mark it was hilarious! 😛 Now let me pull back a little and show you more of the product. 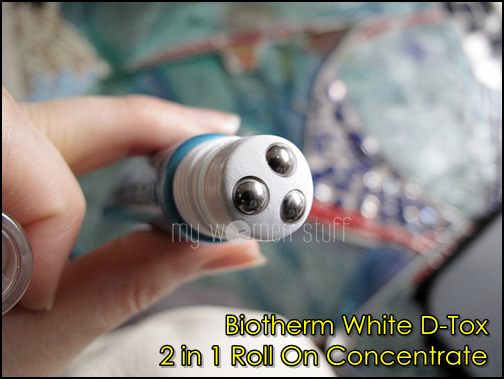 Yes this is the applicator head of the new Biotherm White D-Tox TriAction Roll On 2 in 1 concentrate which is a spot corrector that is anti marks and anti dark spots. The metallic balls help you “roll on” the spot corrector essence on specific spots so you get targeted action. It performs very much like those eye roll on gadgets we have in the market.

Gadgetry aside, wanna know what I think of it?

To test whether the product worked, I concentrated the essence on one particular spot on my left cheekbones. I’m testing something else on the right. I must admit that there is a certain brightening of the pigmentation area. The spots look less noticable which is great.

I have only been using it about 3 weeks. I don’t believe in miracles nor do I ever believe that whitening or brightening products can remove pigmentation totally. What I do believe is that it can help brighten the skin so pigmentation looks less obvious. And there was a discernable difference especially when I pat on my concealer in the mornings. I use less.

One more side benefit. My old acne scars look lighter. I’m not saying they ARE lighter but they LOOK lighter and less obvious.

While using this, I had itchy fingers and picked at a blackhead on my cheek and it was red and inflamed. After the inflammation was gone and only the red marks remained, I decided to test out the “anti-marks” claim. I did find that after about 1 week, the mark left behind had faded quite quickly. Might it be this White D-Tox concentrate at work? It would be nice to think so. Either way, I was happy that the marks had faded quickly enough.

I will continue using this because from my experience with all whitening products, you have to maintain the use to see longer term results.

Packaging could be improved on

However, I have a small gripe about the packaging. The concept is wonderful. A squeeze tube makes it easy to squeeze out product as you roll it on targeted spots to lighten them.

I found however that if I do the squeeze and roll technique, the product wouldn’t come out very smoothly so I don’t know if there is any product on my skin. If I press too hard, my cheekbones hurt (that’s where most of my pigmentation is concentrated) Yet due to pressure, if I squeeze too hard, I’m afraid the tube will explode 😛 Its a bit of conundrum. I took to squeezing out onto my fingers and patting it onto my pigmentation. Sorta defeated the purpose of the roll on eh?

The other gripe is that this product is supposed to be able to be used all over the face. Yet because its in a squeeze and roll on format, you can’t quite put it all over your face. A traditional squeeze tube format might work better for this one, I think.

I will keep using this until its finished. 30ml isn’t a lot and I like the light gel like formula and the fresh scent and the fact that its certainly helping my skin look clearer.

However, I’m sorry I cannot commit to buying this again in its existing packaging. I will, if they change it to a tube because I find it less of a hassle and the formula works for me. Its just me though. You might like it as-is 🙂

Cons: I wasn’t enamoured with the packaging

Have you tried this one? I just realized while browsing the web that this roll on concept isn’t new. There were other brands using the same concept but without the squeeze tube.

I personally reckon that the roll on might work if it was a hard plastic tube instead of a soft squeezable one. Now its neither here nor there.

A 30ml tube of Biotherm White D-Tox TriAction Roll On 2 in 1 Concentrate retails at RM150.

PREVIOUS POST: East Meets West: Lancome’s new BB Base
NEXT POST: What will you miss from Shu Uemura?