We’re on a lash serum roll LOL… Last week you saw my right eye and its new longer lashes. Today, you’ll see my left eye instead. 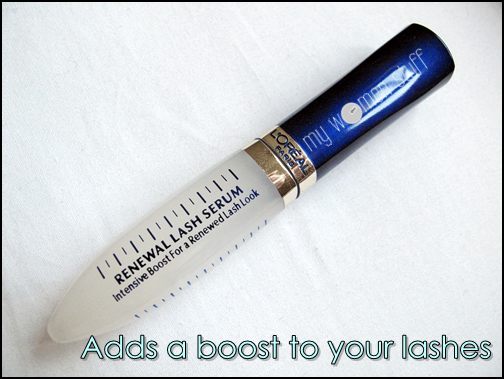 L’Oreal has taken the lash serum drugstore with the new L’Oreal Renewal Lash Serum for, you guessed it, longer lashes. The applicator bears mention because its a little different from the other lash serums in the market. Here’s what I mean.

It take a bit of getting used to because I was never very sure if I was over or under doing it. The L’Oreal serum is quite thick you see with a slight silicone texture to it. So, if you apply too much, you’d get this rubbery layer on your lashes.

I started out using this day and night. Halfway through the first week, I switched to just using it in the night. The reason was because although I’d let the serum dry on my lashes, my mascara did not sit well over it and my lashes felt heavy. Used at night, there were no problems.

I experienced no eye irritation nor any untoward incidents when using the Renewal Lash Serum. I also applied it on my lower lashes, because I do want some lower lashes to grow too. Here’s the deal. This is a Lash Renewal Serum. It will not help you grow new hairs – if it did, they’d have marketed it for people going bald, not just for lashes 😛

What it does is to condition your lashes, to make them stronger and perhaps even help boost lash growth a little. So I know what you’re thinking. Enough of the talk! Let’s see some pictures! Again, beware large scary eye closeup pictures.

Here is my left eye before Lash Renewal Serum on the left, and on the right, after 1 month of daily use.

You can see in the top picture that my lashes are a teeny bit longer and a little more lush. From the side, there doesn’t seem to be much difference. From taking these pictures I realized that my lashes aren’t as short as I always thought them to be 😀

I will not claim to have super long fan like lashes because I don’t and I probably never will. But its nice to be able to wear just volumizing mascara instead of lengthening mascara now.

The lower lash line however is a different story. Whatever few sparse lashes I had refused to succumb to the lash renewal serum and grow. Also I spotted no new lashes 🙁 The other thing I noticed when I first started using was that I had quite a few lashes fall out. But this stopped after the first week so I’m not sure if its attributable to this serum or not.

After applying the Renewal Lash Serum, my lashes do feel a little thick and it feels a bit tacky as it dries. Nothing much to complain about though. The 7.5ml tube costs RM49.90 and will be available at all L’Oreal counters from April 2010 if you’d want to get into the action.

Cons: Silicone texture messes with my mascara, Did not help lower lashes grow, I prefer a brush applicator

So, are you about to try this one? Or have you already tried it (its been launched overseas for a few months now) and have a story, good or bad, to share with us?

Disclosure: Featured Product was provided by the company for consideration. For posting guidelines please read my disclaimer.

Going out of my comfort zone and trying another su

Now we’re back in lockdown, the only beauty item

Pondering the eternal question of whether expensiv

Apparently elephants would eat the fruit of the ma

I remember when I first tried the #antipodesskinca