Home » Interesting Discussions » False Lashes in Mascara ads : Does it bug you? 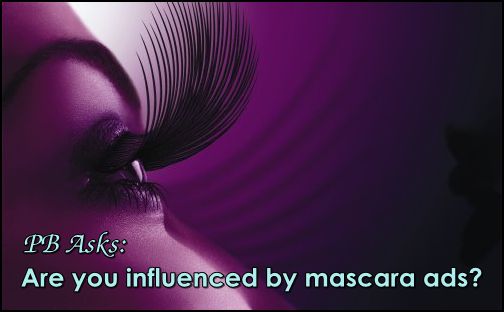 I don’t know if you remember this, but a while ago in 2007, L’Oreal was taken to task for using false eyelashes in their Telescopic mascara ads featuring Penelope Cruz (source). The Advertising Standards Authority then directed L’Oreal to add a disclaimer to future ads whenever models are shown wearing false lashes.

I don’t know if they do (I have never seen any disclaimers by any company) but I personally have not seen any cosmetic brand NOT use false lashes or digitally enhanced lashes in their mascara advertisements.

Perhaps these days they don’t use false lashes anymore. These days, there is photoshop or digital enhancement so falsies aren’t necessary. Still, you’d have to be pretty naive to believe that any mascara will be able to give you long lush lashes to mimic false lashes in just one application, right?

The most any mascara can promise is volume and perhaps some lengthening with fibres that stick to your lashes to make them “appear” longer.

Personally, I’m not taken in by mascara advertisements because I hold no illusions about my lashes and how much more enhanced they can be. Also, no lashes can ever look as shiny, long and sleek as they do in the ads and I’m not bugged by the use of “false lashes” or “digitally enhanced lashes”. I don’t proclaim to support the actions of perceived “false advertising” but I do understand that there is a certain exaggerated claim in ads to sell us consumers something. There is an element of exaggeration in every product or advertisement for anything.

What we are really being sold is “hope”. We are sold the “hope” that the product will indeed give us longer, lusher lashes with more volume. I like to take this element of “hope” with a pinch of salt. If it works for me, great. If it doesn’t, NEXT! But then, I’m a sceptic – I view everything with suspicion 🙂

How about you? Does the use of false lashes or digitally enhanced lashes in mascara ads bug you; or are you taken in by the ads and that the mascara featured can do everything it claims?

Thanks to Yani for prompting this thought 🙂