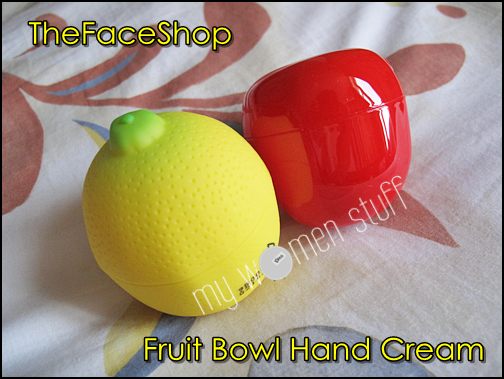 I knew I should have stayed home over the weekend. If I did, I wouldn’t have gone out to spend money 😛 That said, I’m quite happy with what I bought from TheFaceShop which is on sale in store until 11 April 2010.

I’m not one for cute stuff, but these 2 fruits had me from the word “Go!” What are they? Hand cream! Aren’t they adorable?! 😀

The lemon is lemon scented (you don’t say!) with a strong sharp lemon scent that smells like freshly squeezed lemons and nothing like dishwashing liquid. Thank goodness! Normal retail price is RM29.90 and they were 50% off. So, I picked up its sister – Apple 😛

Apple smells like erm… apples. A sweeter smell than lemon and one that is potentially cloying so don’t over use it. 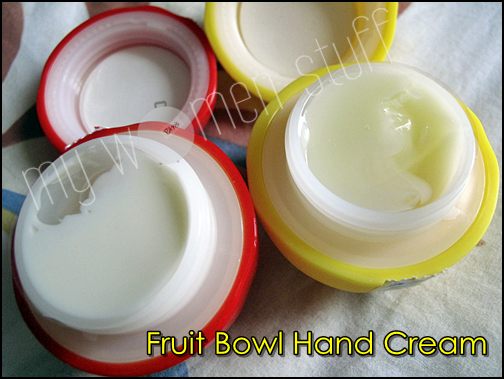 I’ve been using them for a few days now and I’m happy with it. Its light yet soothing on the skin and performs as well as a stronger hand cream might. The fruity fragrance starts out strong but mellows and fades quite quickly so you don’t walk around smelling fruity all day.

I have Lemon in my handbag – its cuter and sturdier than carrying a tube of cream and the “cap” clicks shut so I know its tight. I have Apple on my bedside table for the night.

There isn’t much product – 30ml – and at the rate I’m going, it’ll be gone soon so I might pick up another pair before the sale ends. 😀 I don’t usually run product reviews so quickly but I just HAD to tell you about these cuties before the sale ends in store so you can pick yours up too 😀

I also picked up a couple of face masks – 20% off. Will let you know what I think of them later 😀 Have you tried these hand creams? Aren’t they adorable?