I spent the weekend down in Singapore in the company of some lovely friends. As usual, our life was not without drama and close shaves. Way closer shaves than the men of the Chippendales have, I dare bet.

But drama aside, it was worth the fun of seeing men take (almost) all their kit off LOL! Some sneaky peeks pictures below.

I also spotted a couple of new cosmetic things in Singapore which I wanted to share. Some are coming in in the next month or two so I’ll preview them closer to launch date. However, I had not heard about these 2 new products or ranges.

This was an anti-aging line of skincare targeted at the mature woman from age 60 years and up and is for very dry skin. I appreciated that L’Oreal found a mass market even for older women who have different sorts of concerns for their skin! I’m not sure if we’ll see this range here though. 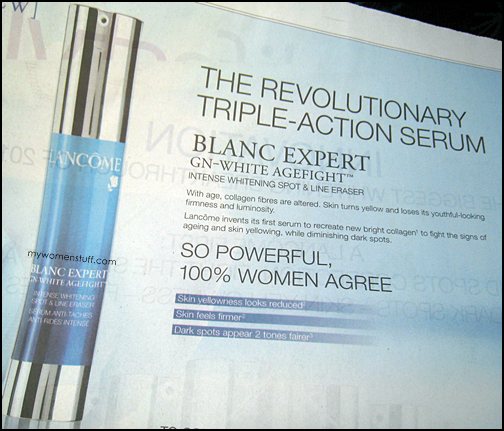 I saw this one in the Singapore Straits Times newspaper. Its a new whitening serum by Lancome in their Blanc Expert GN White range. This new serum is touted to intensively whiten and erase lines, intended to fight the signs of aging and skin yellowing while diminishing dark spots. Not sure if its out here yet.

Before I went down to Singapore, I came across a post by Mag about a freebie eyeshadow palette from Ed Pinaud worth S$59 with a local magazine L’Officiel. For some reason, I wanted it and Beetrice kindly helped me pick up the mag. The eyeshadow palette I got was 05 Blue Black. It looks a little too insipid for my liking. Note to self. Do not get suckered into magazine freebies again! 😛

Fortunately, it was only S$5.90 so it wasn’t all too bad. Not knowing anything about Ed Pinaud, I googled it and it trns out that its a brand carried by the same people who carry Lampe Berger. Since I’m not a fan of MLM (Multi Level Marketing) I’ll end my story here until I try the palette out properly.

For anyone in Singapore wanting to pick this up, Connie found a copy at 7-11 and I saw it at quite a few news stands while we were wandering around.

Chippendales – The Ultimate Girl’s Night Out

When you have 10 tall, buff, good looking men get into character to cater to every woman’s fantasy from fire fighter to military officer in dress uniform, and then slowly stripping off, you can bet the temperature at the Coliseum Hard Rock Hotel Sentosa was raised way up. (Part of the reason why we were all hot and sweaty was also to do with the fact there was no air conditioning) Some women were crazy excited to the extent of trying to paw the semi-naked men at every opportunity although the men were professional and kept their distance. Some were more restrained. Others sat there with pursed lips so I wondered if they knew what they were in for. I personally never saw any granny go gaga as claimed. Most “grannies” sat there looking stunned 😛

It was a small but responsive crowd and we got “free upgraded seating” because the hall was a little empty. Still, the noise could have fooled anyone with one woman even flinging her undies on stage to the bemusement of the men on stage, in their boxers. We on the other hand, had a bit of attention from some of the Chippendales men because we had a bride-to-be in our midst complete with little pink veil 😀 She even scored herself her very own torn sweaty singlet. Oh joy! 😛

Buff bodies and striptease moves aside, I was actually terribly impressed at how talented some of the men were – they could sing (well) and dance and look cute all at the same time with one Bryan Chan being the crowd fave – no prizes for guessing why since he was the only Asian in the troupe! LOL…

I sneaked a few pics after the show before the security caught me and waved threateningly in my face. Thankfully they did not confiscate my camera 😛 So, enjoy the blurry pics of semi naked men above 😛

I’d still want to catch the Chippendales show in Las Vegas though. Something tells me this performance was a little “toned down” for Asian sensibilities. For anyone wondering, no they did not do the Full Monty, just down to teeny tiny G-string thongs a few times during the show, with just enough covering to leave the rest of things to your fertile imagination 😉