Ever since I read about the new Chanel Rouge Coco lipstick, I knew I was going to get them. The local news grapevine told me it was expected in Malaysia in early April 2010 and I was content to wait.

Until partner in crime LeGeeque told me they are out on StrawberryNET.com for US$32 each. All I could say was EEKS!!!!! 2 minutes later, a package was on its way to me which I received this morning :D 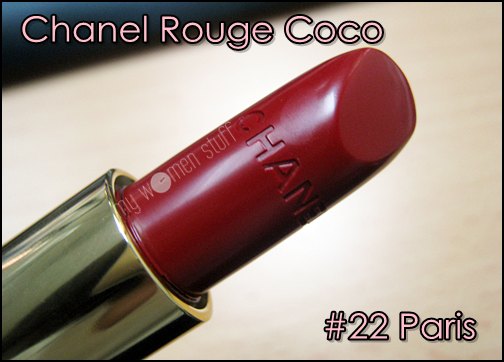 Most of the stronger shades are available there with some more muted shades and although I was in the market for something a little more wearable daily, I picked up #22 Paris no thanks to Best Actress Sandra Bullock at the recent Oscars :P

These are some quick pictures taken under flourescent lighting which isn’t the best to take photos under as most people will tell you. But its a close enough. approximation. I’ve got a swatch below and I’ll put up some better pictures later once I’ve used it a bit.

From preliminary views, the colour in the tube for Paris looks a deep dark red – see picture above.

When swatched however, it takes on a cool blue toned red hue that looks imminently wearable for me. I must say that this one is a cool colour so if you have very warm tones, it might not suit you.

The above swatch of Paris Coco Rouge was done with just 1 swipe on the back of my hand. Yes I’m aware that my hand has taken on a preternatural pale hue. “Preternatural” – you can tell I’m reading too much of Anne Rice’s Vampire Chronicles – currently reading Blood and Gold and feeling the tug of Rome calling to me…

Anyway Rouge Coco in #22 Paris reminds me of Matador in the discontinued Infrarouge line. If I can find my Matador, I’ll do a comparison to see if I’m right.

Ah! Paris! Can’t wait to wear it! Now what WOULD be fun would be to have Paris wearing Paris in Paris eh? ;)

p/s Chanel Rouge Coco retails at US$30 in the USA. No idea of prices in Malaysia yet. I didn’t mind paying extra :P

PREVIOUS POST: Shu Uemura UV Underbase Mousse SPF30 PA+++ – new and improved
NEXT POST: Am I warm or cool? How can I tell?