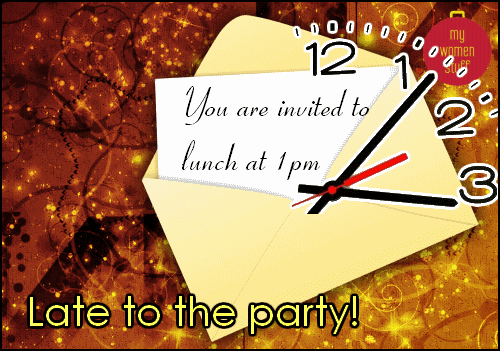 I saw this “party tip” on CloveTwo (a local women’s newspaper supplement) just a few days ago.

Never arrive at a party early even if it’s your best friend’s do. Or else you’ll end up mixing and serving the drinks. Turn up fashionably later, at least an hour after the appointed time, but only if it is not a sit-down dinner. With all that prepping you’ll want to make an entrance, don’t you?

I thought initially that it was a bit of satire. But reading the rest of the “Party Prep Tips” I realized that it was not. It is supposed to be a valid tip unless satire is lost on me.

So my question to you is this:-

Do you arrive “fashionably late” or do you think it incredibly rude to turn up late?

My personal view is that it is terribly rude to turn up late for anything. There is a reason a time is given to you. Turning up late without a good reason tells the host that you don’t care for their party or for their time.

Even if you do have a reason for turning up late, apologies are always good manners. Swanning in, expecting to make an entrance would likely get you looks that say “Who does she think she is turning up a whole hour later?”

The same is true for meetings, appointments or meetups with friends. A few minutes is forgivable – there is always that time worn excuse of “traffic jam” but anything more than 15 minutes (without a valid and reasonable excuse and purely for purposes of “making an entrance”) is just plain rude and bad mannered.

However, there are occasions when you cannot help being late for an appointment, perhaps due to an emergency or something cropping up at the last minute. It happens to the best of us. In such situations, good manners dictates that you let the other person know as soon as possible that you will be late. This way, they can make their own arrangements and plans and not sit around waiting for you. There is a reason we are glued to our mobile phones – use it.