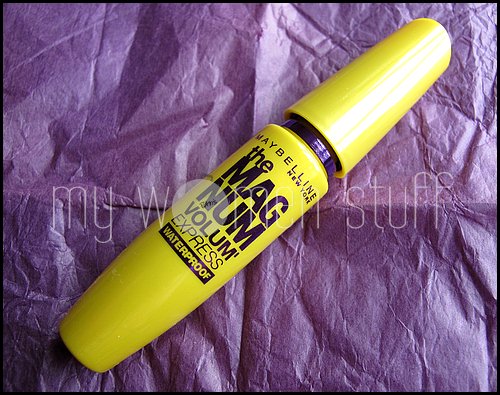 If you’re down at MidValley Megamall this past weekend you might have noticed the bright purple and yellow Maybelline promotion area smack in the middle of the Lower Ground floor. Welcome to the world of Magnum lashes… or so Maybelline promises.

Some time last year, I came across a new yellow tube of mascara by Maybelline called Colossal i.e. HUGE. We never got it and so I forgot about it. When I saw the new yellow Volum’ Express Magnum mascara, I thought they’d brought in Colossal but under a different name. Connie of Skindeco soon set me straight by telling me that Maybelline Colossal and Magnum are 2 different mascara. Ah!

Unfortunately, whenever anyone says Magnum, here’s what I think of:-

So ok, after giggling at the picture of Tom Selleck above, you are thinking “So, seriously, what do you think of Maybelline Magnum mascara?” and I’m happy to tell you that although Maybelline mascara and I were never best friends, we are slowly getting to be friends.

The Maybelline Volum’ Express Magnum mascara (I’ll just call it Magnum from now on) is part of the Volum’ Express range which um… adds volume 😛 Length however, is debatable. In fact, I’d go so far as to say that whilst this mascara does add volume commendably and a little length, you can’t expect the long lashed false eyelash look because it just won’t happen. If you have naturally short lashes, nothing will give you that lush long lashed look of falsies except falsies!

But coming back to Maybelline Magnum. Take a look at the brush. Its interesting.

That’s because its slightly curved. The bristles are quite sparsely arranged but arranged in such a way as to be able to grab quite a lot of your lashes at one go. The inner curve has shorter bristles while the edges and outer part of the curve has longer bristles.

I use the inner side of the curve to apply mascara on my lashes and one swipe is usually enough to give decent definition to my lashes. The brush is still a little big for my liking but I’ll live. I do have short skinny straight lashes so volume and length are 2 things I look for in a mascara.

Magnum delivers on the volume front. 2 swipes of the mascara wand (1 with the inner curve and 1 with the outer curve) and I’m slowly getting thick lush lashes. Happily, my lashes aren’t weighed down much. I’m starting to think that Maybelline has been listening to my rantings – there is no chemical smell nor strong fumes and the formula does not weigh down my lashes anymore. Yay!

But as I said, length is debatable. I do get a little bit of length. But its nothing dramatic. I believe in fact, that its the volumizing of the lashes that give the perceived length. Clumping is minimal and there was no smudging for me. The formula holds a curl decently too so I still have relatively curled lashes by the end of the day.

But I must tell you of something I realized when I was trying to remove the Magnum mascara at the end of the day. Its a PITA to remove! Well, if you are using cleansing oil, that is.

I tried removing it with cleansing oil a few days and was so worried that I was giving myself lines in the eye area because I could hardly get the mascara to budge from my lashes. I was also worried I’d lose a whole bunch of lashes!

But, I realized that eye makeup remover works much better than oils in removing this mascara. I was at my wits end but by using regular eye makeup remover I got the mascara off in 3 swipes of the cotton pad. Goes to tell you that there’s a technique to everything 😉

A tube of Maybelline Magnum mascara retails at RM35.90 at all Maybelline counters.

Pros: Volumizes lashes, Does not smudge or clump on my lashes, Affordable, Waterproof

So, have you tried this one yet? I believe they might be selling it at some special promotional price for now. Or they probably will go on sale at some point in time. Do share if you like it – I’ve been using it everyday now for nearly a month and happy with it! Almost forgot to tell you about this one till I saw the promo booth 😉

PREVIOUS POST: These (knee high) Boots were made for walking
NEXT POST: Lifebuoy buoys you up (and a giveaway!)