Hot Mama powder blush was a gift from a friend a while ago, before theBalm made its way to our shores. She thought I’d like to try something new and different and she was absolutely right. 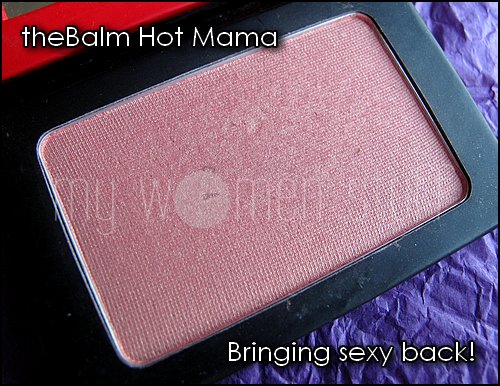 At first glance, I thought “Hmm… Hot Mama looks a lot like Nars Orgasm!” Its got that same peachy pink tone but I swatched them side by side and its not quite as close. Hop on below for the swatches.

On its own Hot Mama is a peach pink powder that is supposed to work as blush, highlighter and eyeshadow. Theoretically it does. In practice, unless you want to look perpetually flushed and erm… looking like you had too much “fun”, I don’t recommend using Hot Mama all over. What it does work well as is a blush and I would say that it could suit most skin colouring.

Personally I feel that its more wearable for the majority than Nars Orgasm because it isn’t as shimmery and the colour is more flattering. I can wear Orgasm but I much prefer most of the dupes I’ve found and I never caught the hype anyway. My Orgasm blush is languishing away in my drawer untouched for many many moons. So, coming back to Hot Mama – how does it look on? Well, swatches are below 🙂

You might remember me overdoing Hot Mama in a look I did using Guerlain Grace Rouge G lipstick. Yes, Hot Mama is very easy to overdo if you have a heavy hand or if you aren’t careful. If you have darker skin then its not much to worry about. If you have fair skin then you might want to use a light hand and a light touch, building up colour and intensity. 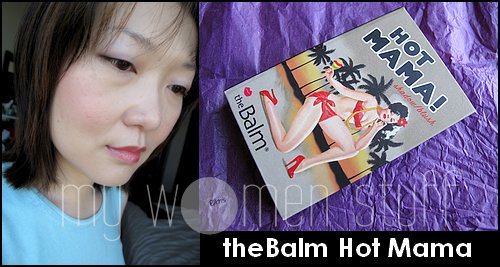 If you are more careful the effect is more subtle. The cover is cute and it comes in a cardboard slip case identical to the cover. I don’t see the point because the case is kept shut with a magnet anyway.

So I know you are wondering this – How does it compare to Nars Orgasm then?

Straight off, side by side with Nars Orgasm and Torrid blushes, Hot Mama is pinker. Its less shimmery than Orgasm but a little more shimmery compared to Torrid.

Hot Mama was the first item I tried from theBalm. Its a nice little brand but it would also be nice if they broke away from the mould of Benefit Cosmetics or Pout (now defunct). Retails in the USA for US$19 and locally at Sasa (so I’m told – I haven’t seen it with my own eyes 🙂 ) but I don’t know the price.

Have you tried Hot Mama or anything by theBalm? I hear their eyeshadows are getting raves and I was also gifted with Down Boy blush last year which I’ll talk about a little later.

PREVIOUS POST: Fake the hourglass look with wide belts
NEXT POST: Should you sleep with your bra on or off?