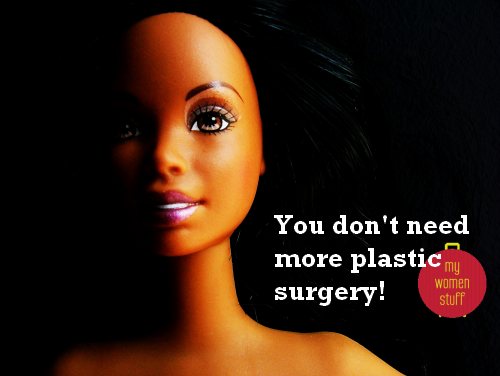 I read with horror the news of a former Miss Argentina dying from plastic surgery just recently as reported in The Age. Here’s a quote from the article that had me staring at the screen in wide-eyed shock:-

Magnano, Miss Argentina 1994, a married mother of eight-year-old twins, went under the knife on Thursday at a plastic surgery centre in the capital city, Buenos Aires, hoping to tone up her derriere.

She was rushed to the hospital on Friday suffering from a pulmonary embolism, and died on Sunday, her friends said.

“She only underwent the procedure because she thought it was no big deal,” said Guillermo Azar, another associate from the fashion world and a close friend of Magnano’s.

I suppose in many ways, a basic procedure to firm up the butt is considered “no big deal” but what many people forget is that any surgery is a big deal, and more so cosmetic surgery because so much of it is unnecessary! Bust augmentation or to be less PC “boob jobs” and rhinoplasty or “nose jobs” are the most common surgical procedures which are now “no big deal” but they are still invasive procedures that can potentially kill you.

Every surgery, any medical procedure that involves the invasion of the body carries a risk. Even if its 1 0.01% risk, that’s still a risk, even if its being performed by world famous surgeons.

Locally, I’ve read many news of women dying quite unnecessarily from botched cosmetic surgery. The most recent case was that of a wife of a prominent local politician who died after undergoing liposuction.

My personal belief is that unless surgery is absolutely necessary to save your life, its always a last resort. But going under the knife for vanity is a touchy subject.

I guess you might say that my undergoing the Lasik procedure to correct my myopia or short sightedness is also an unnecessary cosmetic procedure. So really, I’m not one to talk. But it went well for me and I’m happy with the result. I was informed of the risks and I was aware of it – I never discounted it as “no big deal” especially when I found out that I was only a small percentage of people who did not undergo conventional lasik. However, I draw the line at invasive surgery for purely cosmetic reasons and I don’t see myself undergoing anymore or other cosmetic surgery.

What about you? Have you or will you consider undergoing cosmetic surgery for purely cosmetic reasons? Would you consider Lasik a cosmetic procedure? 🙂