So, my sort of signature look this year has been smokey-ish eyes and red lips. For me, that’s a fool proof look I can pull from day to night. Part of the reason also is that smokey eyes can hide a multitude of makeup mistakes and then I distract with red lips. haha… 😛

So, here’s how I’m ringing out the old year and ringing in the new. 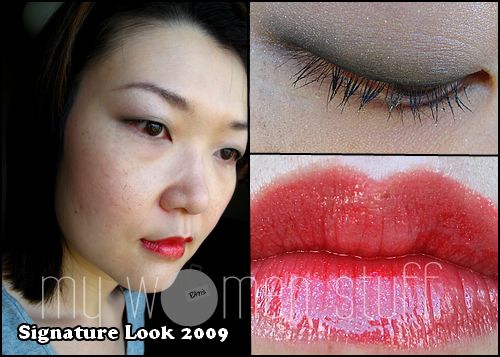 Because I’m feeling a little lazy, I’m going with quite an understated eye look. A quick blend of the Maybelline Eyestudio Diamond Glow palette in pink gray and I’m done. I’ve used it so much this year with great success, I amaze myself at how this affordable palette has saved my look time and again since I discovered it.

For a touch of understated glam, I’ve dabbed on the Guerlain le 2 Brush Mascara in Reine 2 Nuit which was released with the Guerlain Christmas collection. I’m going to complain about the packaging. It looks pretty, but feels like plastic which saddens me. I liked the heft of the original le 2 Brush mascara 🙁 The base mascara colour is black and the top coat is gold. Not very noticable but catches a little under the lights. Which red lip did you think I’d go with?

For lips, I went with Chanel Jupiter glossimer. I was dithering between Stage Racy Wonderkiss or Dior Serum de Rouge Crimson but I decided to go with something a little less bright yet sparkly.

What’s your signature look and how are you ringing in the new year?

PREVIOUS POST: Swim with dolphins on a Ladies Day Out on NTV7
NEXT POST: Auld Lang Syne! So Long Farewell 2009!