Its a blissfully relaxing  Saturday and I have the 2012 movie lined up this afternoon! Haven’t been to the movies in ages and it has to be a disaster movie – go figure! 😛

Strange Search Query of the week

Oho! Here’s one that’s appeared a few times before “sex toy at Tropicana City Mall” which led them to my most innocent post here. Honest guv’ I wasn’t writing anything risque! 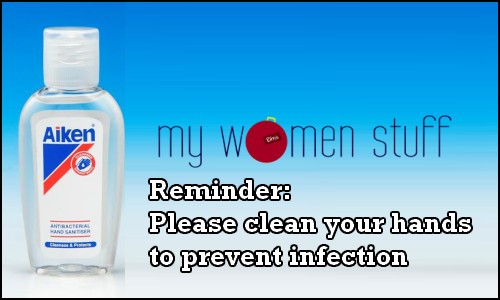 We’ve been warned by our Government of a second wave of H1N1 flu that might strike at any time – not the Google Wave 😛 So its not yet time to pack away all those hand sanitizers. Instead, make it a habit to keep a hand sanitizer like the new Aiken hand sanitizer by your side. Dinky enough to fit into your handbag and with a small pricetag of RM3.90 for 50ml you can keep one in every handbag so you are never without teehee… Remember, just because you did not get the flu the first time does not mean you won’t get it the second time round!

Elianto & Bonita Warehouse Sale is back!

At the last Elianto warehouse sale I bumped into, I picked up a veritable rainbow of Elianto nail colours at a mere RM2.50 each. And the sale is back! Popped by yesterday afternoon if you saw my Tweets on Twitter, and saw loads of stuff starting from RM1! Notable were eyeshadows and nail polishes for RM5 for 2 and RM5 for 3 – go crazy! Also Bonita accessories and random clothes which quite puzzled me but there you go. You can get the map on how to get to the Elianto and Bonita warehouse at Shamelin Perkasa from the MWS Facebook page 🙂

So in case you missed it, here’s one of the last few giveaways on My Women Stuff for 2009 – a pair of earrings worth RM130 from Serenity Gemz. Be quick and you might get it in time for Christmas 😀

Have you seen the Fallen Princesses?

Image on Flickr by MieL / RMLFVR and Credit of Dina Goldstein

I stumbled across this site called Fallen Princesses and it was great for a laugh and perhaps something to think about! Artist Dina Goldstein places the popular fairy tale princesses in a modern day scenario – is it really “Happily ever after” as most little girls are led to believe? Check it out and see! 😀 My favourite is Snowy – whats yours?

PREVIOUS POST: Win a pair of Foxy Originals Earrings worth RM130!
NEXT POST: Are you willing to give up high heels for your back?