I’ve given Maybelline mascaras a hard time. I disliked the Maybelline XXL Mascara and the Maybelline Unstoppable mascara was quite stoppable as far as I was concerned. I bought them both and I binned them both as quickly as I could. But when I have so many people extolling the virtues of the new Maybelline Volume Express Hypercurl mascara, the itchies struck and I had to test it. Reader Monstro swears by it so there had to be something to it right? 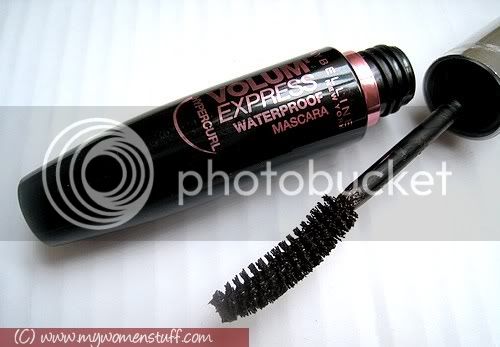 I picked one up at Guardian a while ago for RM25+, a promotional rate from its regular RM30.90 retail price and when I got home, I belatedly saw I’d gotten it in BROWN! Brown mascara?! Its a first for me! The mascara is actually lighter than it looks in the photo above.

The Maybelline Volume Express Hypercurl Mascara is the one in the short fat tube with pink metallic wordings. The counter and print ads show models with impossibly long curled lashes and it promises to add volume to your lashes and curl and keep your lashes curled the whole day.

Brown mascara. How does it look on the lashes? Surprisingly natural, that’s what. You don’t get the va-va-voom effect that black mascara gives but what it does is give a soft, more natural look. If you have pale lashes e.g. blondes, then a brown mascara may give you a more natural look than black which is stark. For me – asian with dark hair and lashes – this brown mascara gives me a look for work without looking too made up and fake eyelashed. Forgive me looking a little stunned in the picture LOL..

Does the Maybelline Volume Express Hypercurl add volume? Yes it does. The short fat brush does a good job of adding volume to the lashes and 3 coats will give you nice noticeable lashes if you have sparse lashes.

Does it curl? No. I tried it first without curling my lashes. I have stick straight Asian lashes that point downwards and using the mascara alone does not curl my lashes one bit. The next day, I curled my lashes as usual then applied the Hypercurl mascara. This time, my lashes stayed curled the whole day so I guess the mascara is doing its job of holding curled lashes. It just does not curl them if you don’t use a curler before that.

I do have my usual gripes about Maybelline mascaras:-

However, the Volume Express Hypercurl is not as heavy as the other 2 mascaras I have tried and it doesn’t cause my lashes to fall from curled to straight; so for that it gets a plus point. Also, I did not get the strong chemical smell and fumes near my eyes as I did with with other 2 Maybelline mascara I tried, so again, Hypercurl gets a plus point. (I don’t know if its because I ended up with Brown instead of Black formula)

I’ve heard that the Maybelline Volume Express mascara is comparable to many higher end mascaras and in particular, to the Anna Sui Full DX mascara which is my favourite mascara to date. Having now tried it, I can see how proponents of the Maybelline Volume Express are right to a degree insofar as the mascara is volumizing at a fraction of the cost of Anna Sui’s. I’ll do up a challenge some time this century to see how they fare in a head to head combat 🙂

Do I like the Maybelline Volume Express Hypercurl mascara? Actually I’m ambivalent about it. Not in love with it, but not hating it either. But hey, its the first time I’m not hating a Maybelline mascara!  🙂