Bobbi Brown launched a Pink Raspberry look for Spring 2008 and I found it underwhelming. However, Bobbi Brown has also launched a Nude Collection set for release in March 2008 in the USA. I don’t know what it is about cosmetic companies and nude collections. MAC Cosmetics have also launched their N Collection which is a bunch of nude or neutral colours too. Coming from a company that thrives on colour, that is truly strange. 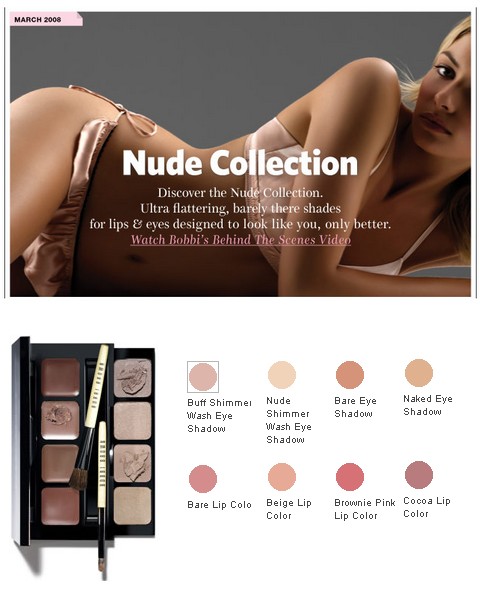 I think it looks boring. The 4 eyeshadow shades – Buff Shimmer Wash, Nude Shimmer Wash, Bare and Naked – have little variation to create much definition. There is no dark colour that could be used for lining or for use in the crease so effectively you get 4 base shades.

I always found Bobbi Brown lip colours too brown for my liking. My natural lip color is a medium rose red shade so brown colours on my lips make them look odd not natural.

So overall, I think this is a very safe palette for anyone wanting to put colour on their faces without looking like they put any colour on. Kind of makes me wonder why 😛

PREVIOUS POST: Contour Express Gym – a fitness centre for women
NEXT POST: Review: Makeup: Make Up For Ever Lift Concealer

5 comments ... Read or JOIN THE DISCUSSION