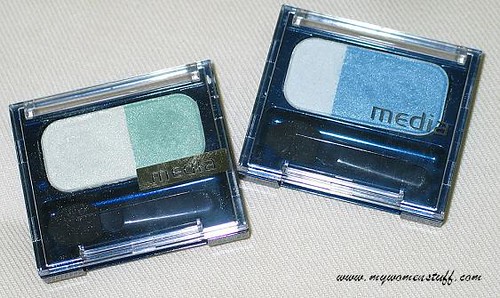 Kanebo Media has to carry some of the best cheap eyeshadows there is to offer in the market. I previously reviewed the Kanebo Media UV Makeup base and today, I’m reviewing Kanebo Media eyeshadows.

Kanebo Media is a cheap drugstore offshoot of the Japanese mainstream Kanebo brand. Here in Malaysia, they are found in pharmacies notably Guardian and Watson’s and also Sasa. Online they are sometimes found at Adambeauty.

Don’t be fooled by their low cheap price though, I find that the texture and staying power of these cheap drugstore eyeshadows rival most of the department store brands. Each eyeshadow duo comes with 2 colors – a main color and a lighter highlight shade. You don’t find dark colours, maybe because the Japanese don’t go for dark colors on the eyes but mainly lighter shimmery shades.

The texture is smooth and pigmentation is fairly good. The lighter shades do tend to be on the sheer side though. I have GN-2 (green) and BU-1 (blue) and I find that the green one which is of a newer collection, is slightly more shimmery. However, it isn’t so over the top as to be frosty. I would like it if Media came up with a little palette that had a slightly darker shade in it, for contrast, but I usually just use another colour from my collection, or draw a thick line with eyeliner and smudge it a little for contrast.

If I recall correctly, they retail for slightly over RM20 but Guardian is now running a special promotional price of RM29.88 for 2 eyeshadows. I’d run out and grab some if I were you!

Cons: A slightly darker shade for contrast would be good.