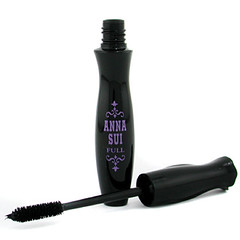 Fireangel and FashionAsia (both FA!) asked below about my thoughts on the Anna Sui Super Mascara DX Full which was gifted to me by a friend.

The mascara comes in a usual tube with the signature Anna Sui rose on the top of the cover. The formula is supposed to make your lashes look fuller and to this end, I reckon it does.

The brush is rather fat though which makes it hard for me as I have rather short and sparse lashes. However, with a bit of patience with the swiping and wriggling of the brush over the lashes, I do see a thickening effect. My lashes when using this mascara do look fuller and thicker and all round more lush.

There is even a lengthening effect but then most mascaras of any value will help lengthen my lashes because I have such short ones. It also helps keep the curl on the lashes, so again, that’s great.

The formula is thick and sticks to the lashes well, but I will warn whoever does not like fragrances in their mascara or eye makeup products, to please stay away, because the signature Anna Sui rose smell is present. I must say its quite strong too. So, when you first apply it, and throughout the morning, I catch hints of the rose fragrance. Does it bother me? No. But if it does bother you, do avoid it.

I do like that its waterproof/water resistent. It does not smudge at all and it lasts the whole day long, keeping my lashes looking as full and as lush as when I first applied it in the morning. It can be quite stubborn to remove but I use cleansing oils to remove my mascara and so far, its been no problem.

Cons: Expensive, has a fragrance which some people might dislike

7 comments ... Read or JOIN THE DISCUSSION