I came across two articles at Reuters and the Daily Mail while scouring the internet yesterday that talked about Spanish fashion brand Zara withdrawing a “swastika” bag from their stores. This piqued my interest, so I went to look up the bag in question.

Here is the picture of the GBP39 bag, and there on the side, is the swastika symbol in green. 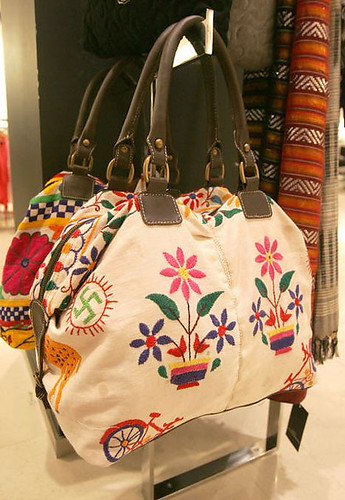 Here in Asia where Hinduism and Buddhism are widely practiced, the swastika symbol is less controversial, because it is an ancient symbol that is present in both culture and religion. However, I can understand why it is causing an uproar in Europe which went through the Holocaust under Hitler, who had adopted the swastika as the symbol of the Nazis. There, it is a symbol of oppression and fear.

When Zara commissioned this bag, they were either oblivious to the symbol or had let it slip past unnoticed or maybe it was to court controversy. Who’s to know how the minds of these marketing moghuls work?

All that said, I don’t think I’d have paid much attention to this bag if I had seen it. I think its actually quite ugly and only the swastika has catapulted it into the eyes of fashion. Now don’t all jump on me for saying this!

No Comments yet - START A CONVERSATION

PREVIOUS POST: How do you know its time to bin the mascara?
NEXT POST: Review: Skincare: Dr. Bragi Marine Enzyme