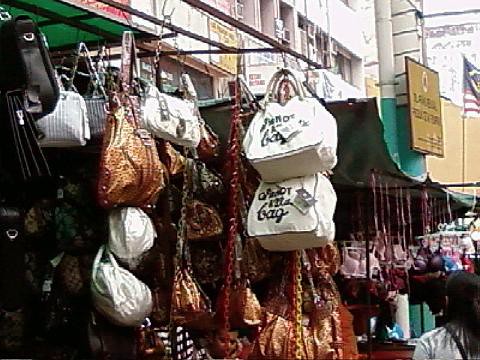 I spotted this today while walking through Petaling Street, our version of Chinatown. There were rows and rows of stalls selling the infamous “I’m Not A Plastic Bag” bag by Anya Hindmarch, which incidentally is sold out worldwide. If Anya Hindmarch had done their market research and honestly and truly wanted to save the environment, they should have just made more for the masses. Then again, I suppose its a marketing ploy to create demand for the bag.

I’ve never seen the real thing up close so I have no idea what to expect of the bag. I honestly thought that it was pretty decent for a casual canvas bag that you can tote around town for the hell of it. Ok, so maybe not with the now infamous words printed on it. Out of curiousity, I stopped by a stall to ask how much they were selling the bag for.

The answer? RM95 was the first quote I got. WTF?! The original bag was selling for only RM55! His reason: Its sold out in the stores. Sucks to him!

The rest of the quotes ranged from RM50-60 max. All in all, very expensive for a knockoff of a RM55 bag! Ironically, I enquired as to the price of a Coach bag hanging at the stall, and was told it was RM55. That one retails for 4 digits in the store so is a decent knock off price. But to pay more than retail for a knockoff is in one word – DUMB! Sorry to anyone who resorted to doing this.