I was reading The Sun newspaper and came across a press review of the new Maybelline Unstoppable Shiny Black mascara. I don’t know what got into me, but I just HAD to try this one. I’m presently using Lancome Flextencils which I think is really great. However, its starting to dry up so I was on the hunt for something new. 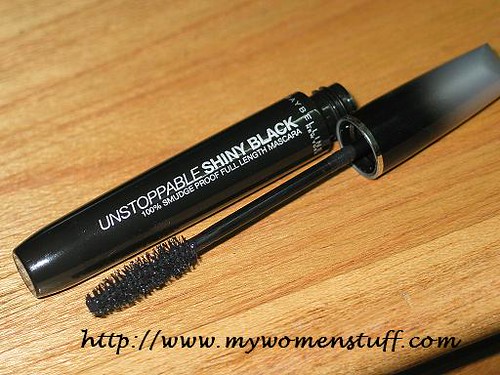 Maybelline has a present line called Unstoppable mascara in a silvery grey tube. It never interested me and I read lots of rants about it. However, this one is in a black tube with a silver top on the cap. I compared the 2 at the counter but could not see what was different between the new and old one save for the difference in the colour of the tube. I can’t find any information online about this item either.

I’m guessing that its called Shiny Black as the colour is supposed to be a shiny black on your lashes. Also its called Unstoppable as its of the same formula. I’m only guessing so if someone can enlighten me I’d appreciate it.

The brush head is not very big which I like, because I don’t have long lashes or big eyes. Having a smaller head makes it easier to work with. The bristles also grab most of the lashes when you apply the mascara on, so its not bad in that sense.

This formula is said to be a 100% smudge-proof full length mascara.

I’ll address the “full length” claim first. I must agree that it lengthens to a degree. I have short lashes and after applying this mascara, I find that my lashes do look longer. However, there is no volume added whatsoever. Not one bit. In fact, my lashes look long and spindly. Not very attractive.

Another grouse I have is that this mascara totally weighs down my lashes. My lashes are stick straight normally. So, before I apply any mascara, I will curl them first. When I applied this mascara, I was horrified to find that my nicely curled lashes totally lost whatever curl had been put into them! Bummer!

As for the claim of being “100% smudge proof” I agree to a degree. I applied it in the morning and by the end of the day, after a strenuous yoga lesson, it had not given me panda eyes. No smudges. Very good for something that does not claim to be waterproof. It also removed easily which is a major plus point.

Colour wise, although I peered and peered, I did not get any impression of any more shinier lashes than I usually have. This mascara costs RM29.90 and is now on offer for RM23.88 at Guardian for a limited time only. Maybelline often goes on sale so try to pick it up during a sale if you want to try it.

I think its good for a beginner or mascara newbie. I previously complained that Lancome Flextencils did not give me volume although it gave length. However, that one holds a curl like nobody’s business, and has much more volume than this one. Then again, the price is also vastly different.

So, now I’ve bought it I’ll probably use this mascara for weekend use or for times when I don’t want to look too obvious that I’m wearing makeup. It gives a long lashed look if you can handle the fact your lashes don’t curl to show it off better.

Pros: Cheap, lengthens, does not smudge

Cons: Does not hold a curl, no volume, makes lashes look long and thin

3 comments ... Read or JOIN THE DISCUSSION