Supermodel Kate Moss has teamed up with UK high street fashion store Top Shop to launch a special collection inspired and designed by her – Kate Moss for TopShop.

This follows in the footsteps of other celebrities – Madonna and Stella McCartney to name two. It promises lots of attention and sales for Topshop and probably marks a comeback of sorts for Kate Moss who we last heard had been dropped for many advertising campaigns due to substance abuse.

This collection premiered yesterday May 1 2007 amid much hype in London. I took a browse of the stuff over on Topshop’s website. Now remember, Topshop in the UK is pretty much a high street brand, unlike in Malaysia where its considered semi-high end due to its outrageous pricing.

In England, the prices are considered pretty normal high street which translated to Malaysia would mean Padini or Giordano. The only difference is that we won’t get Kate Moss for Padini, that’s for sure!

These are a few things that caught my eye from her collection and their prices: 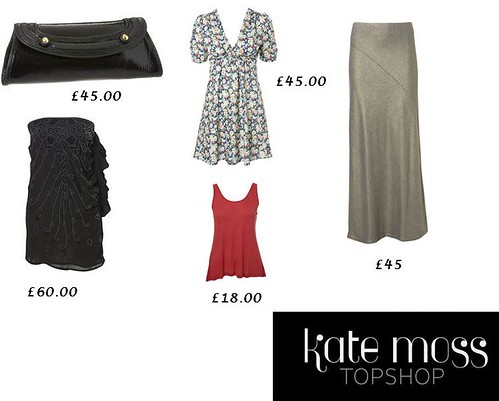 Don’t mind the mumsy flower dress. I don’t know why I seem attracted to those sort of dressses lately. The other items in her collection aren’t anything great I felt. The tops were mostly Tees and the bottoms mostly hotpants or skinny jeans. All of which would fit Kate Moss to a T but may not fit the average size 12-14 woman.

I rather like the clutch though. I’ve been shopping for one so this caught my eye immediately. I can’t imagine that it will be coming to our shores so I won’t hold my breath waiting.

Topshop has limited purchases of each item to 5 per person only. This is to prevent resales via ebay and other portals. As this is limited edition I guess the prices might soar above retail if there is enough hype generated around the world for the items. Now, please excuse me while I scour ebay for that clutch.